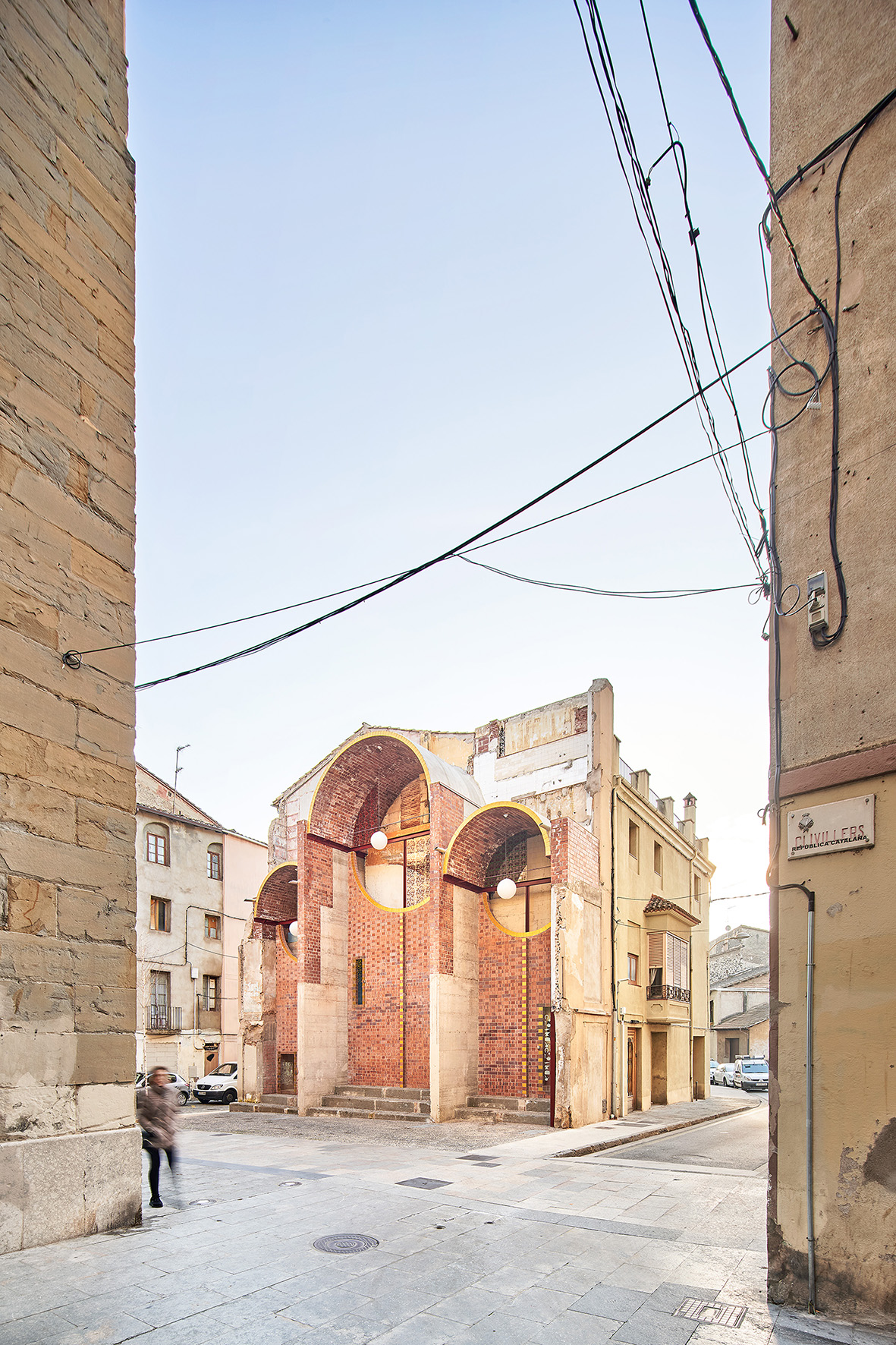 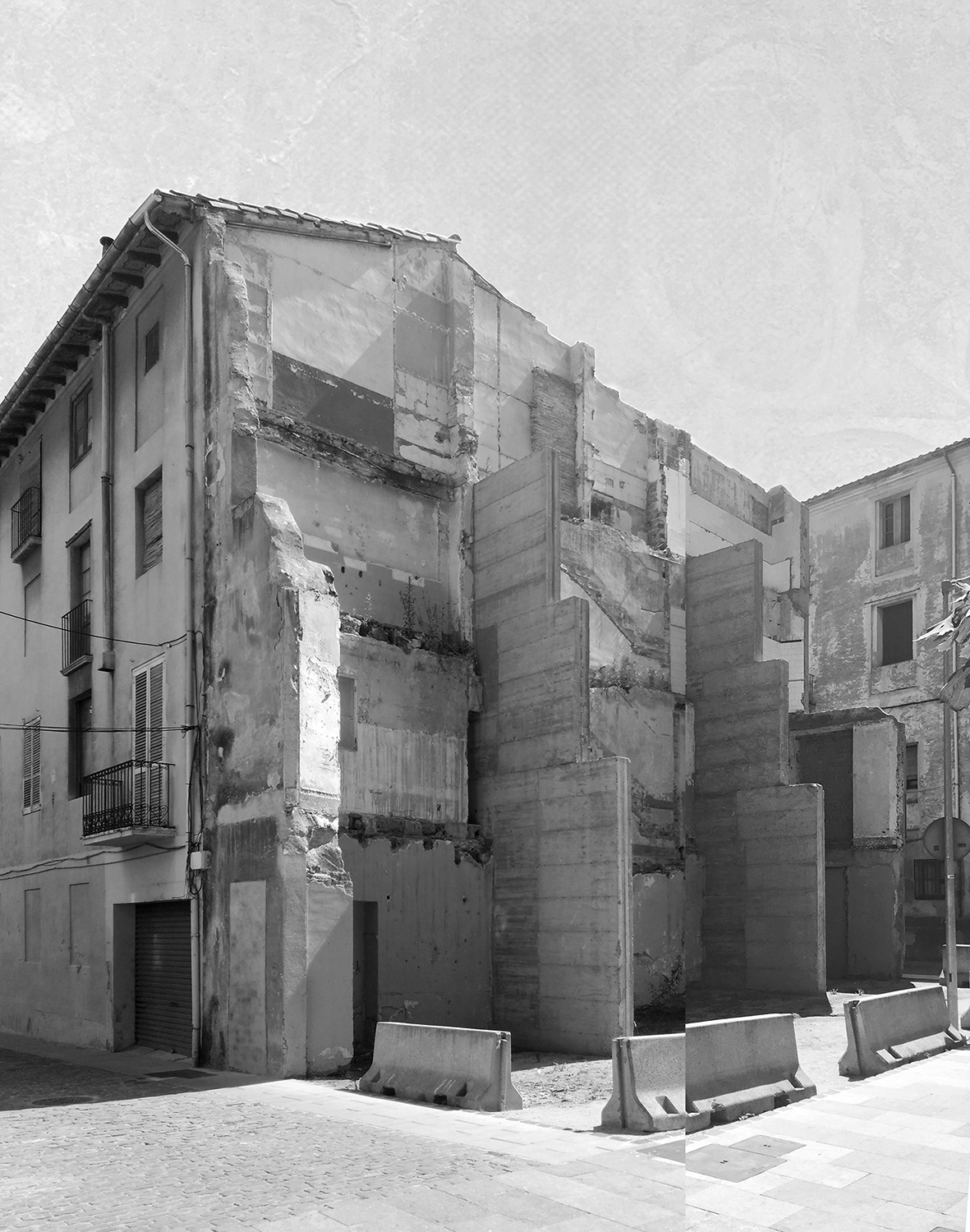 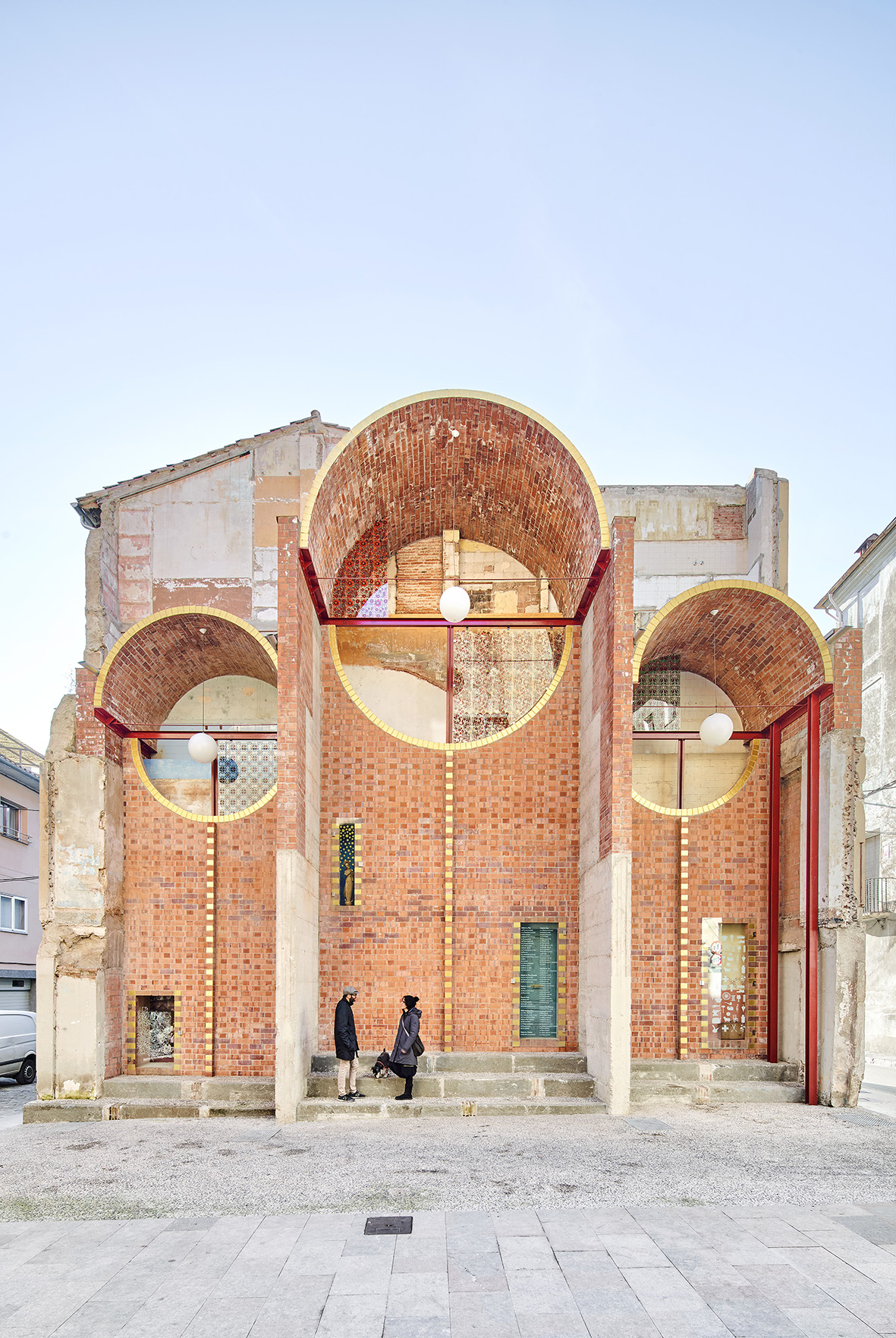 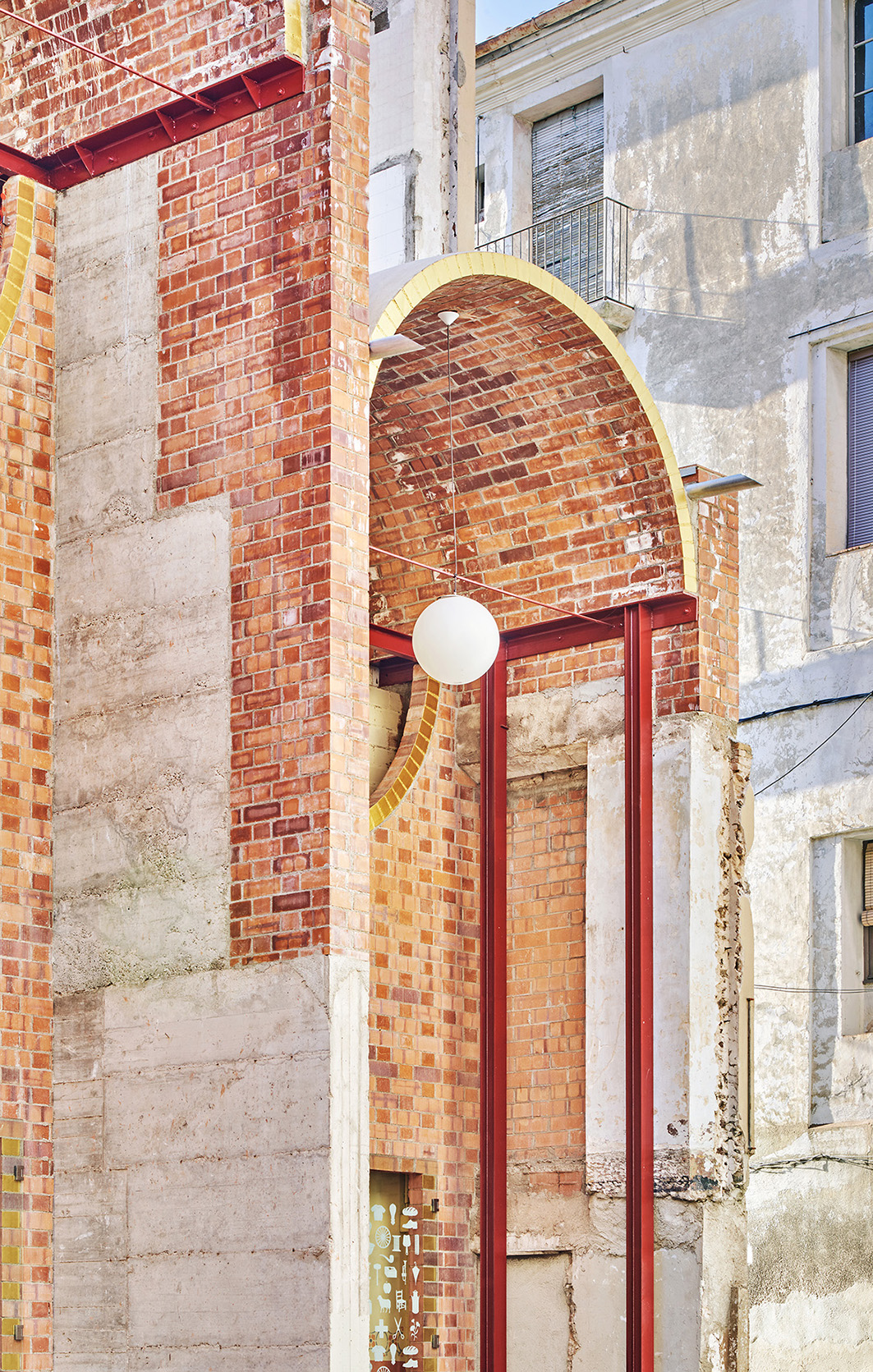 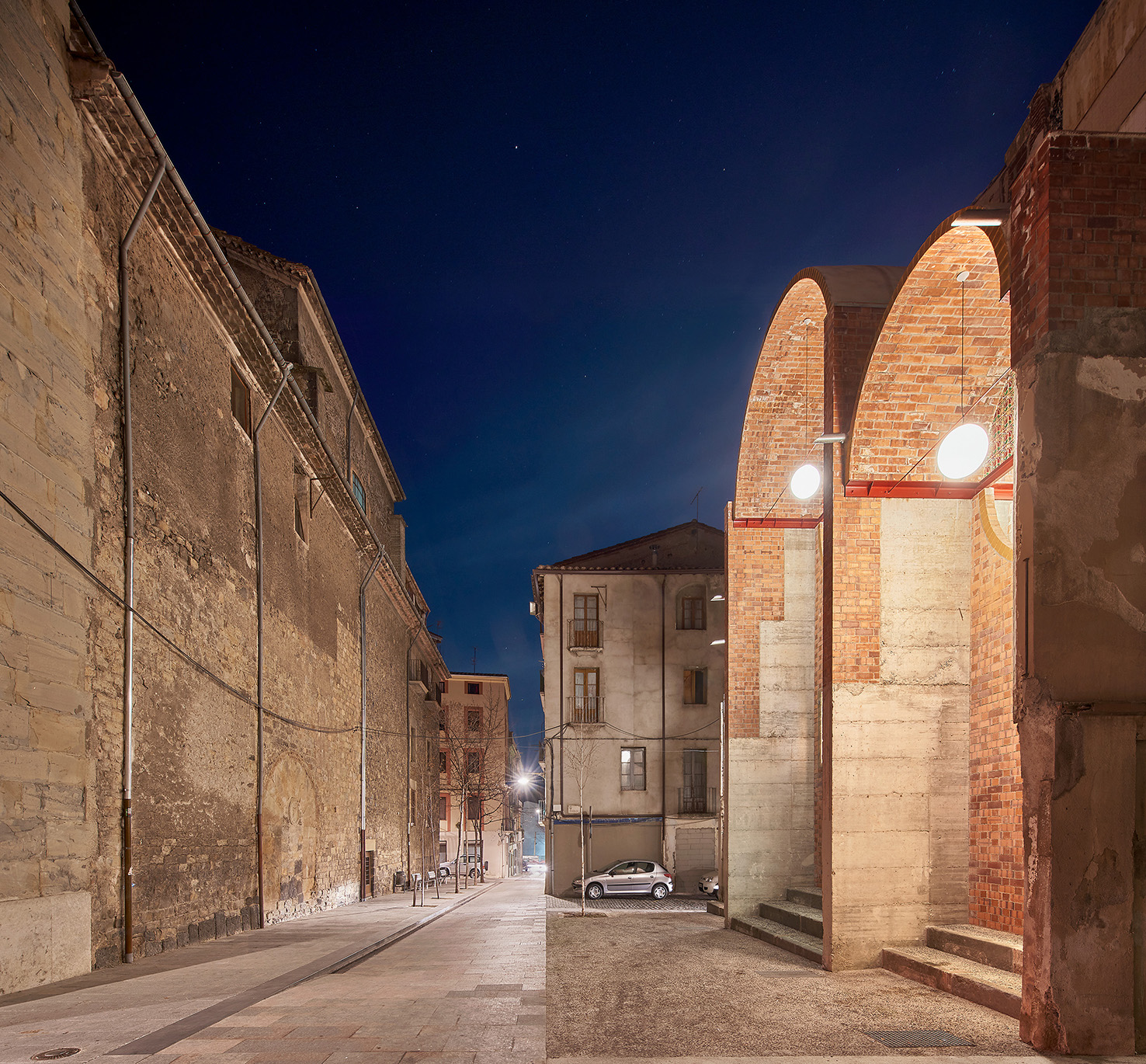 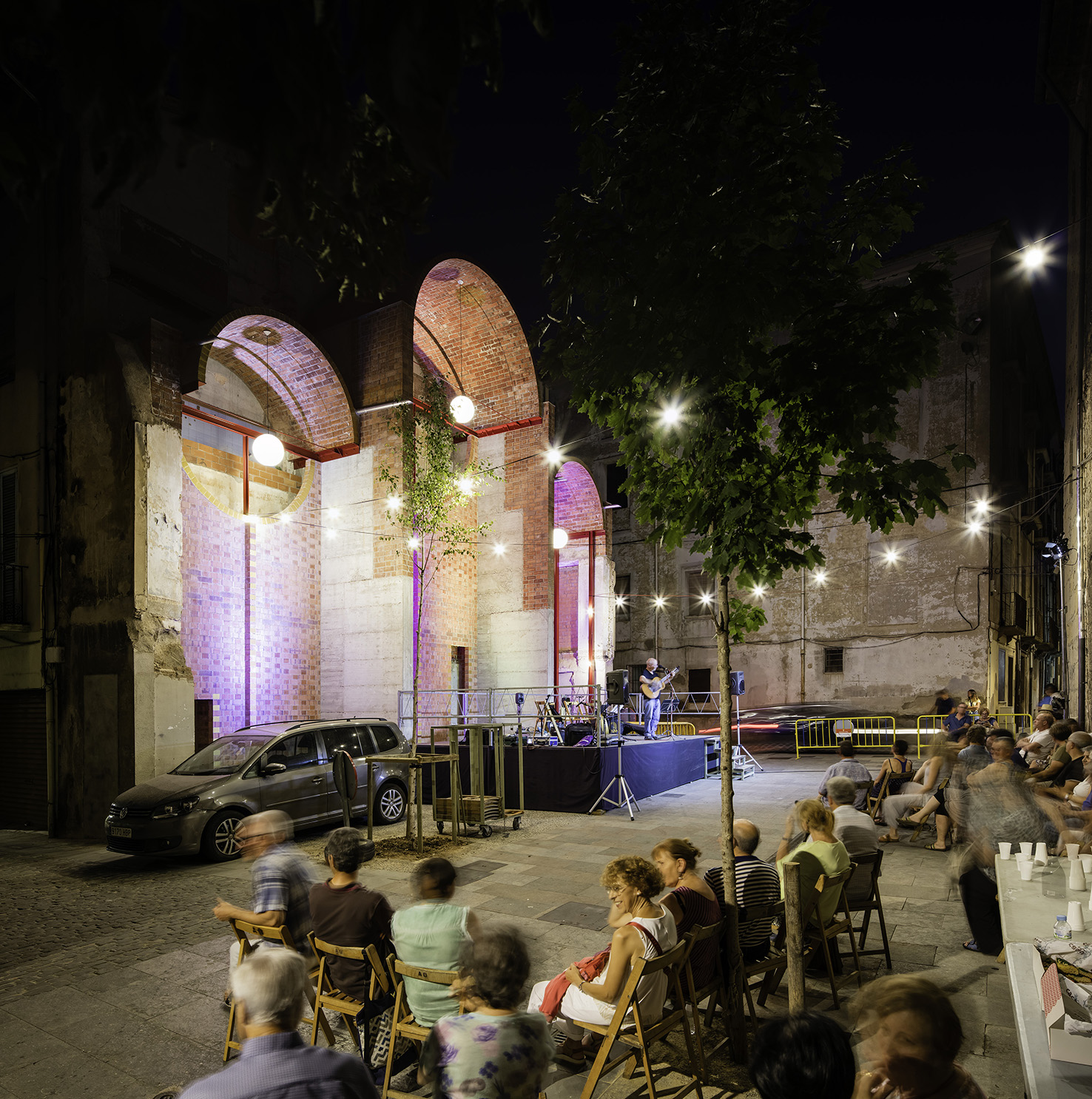 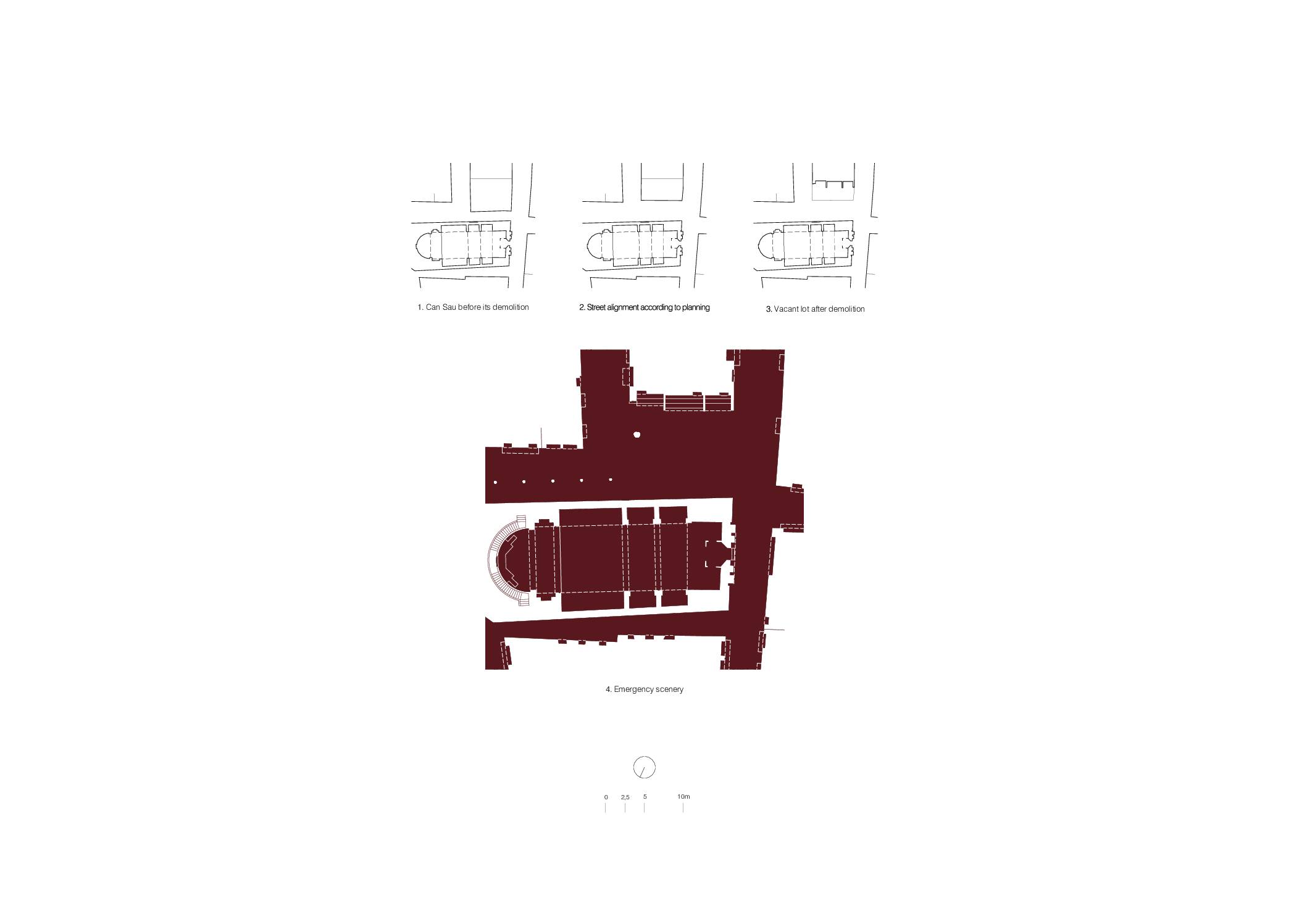 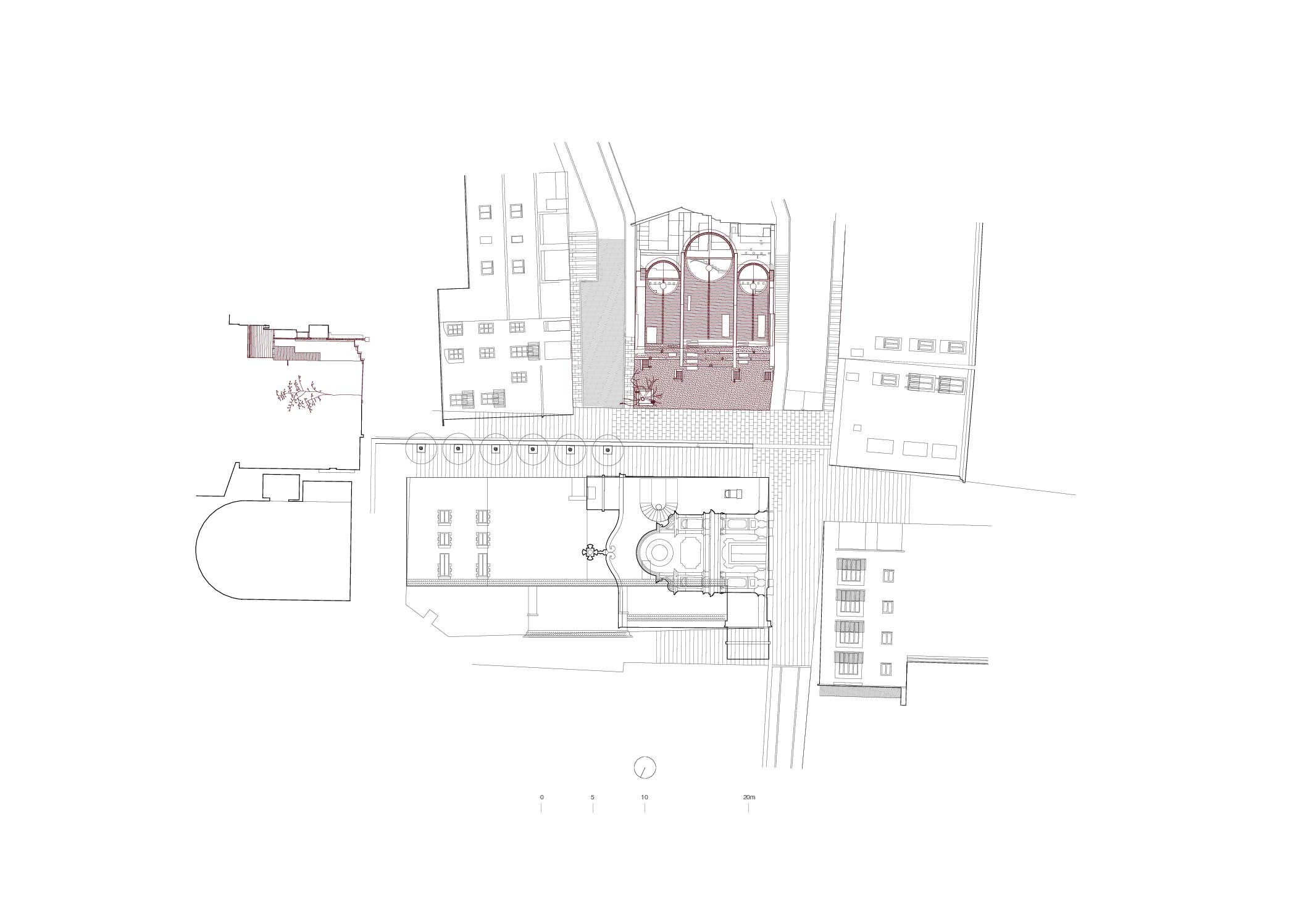 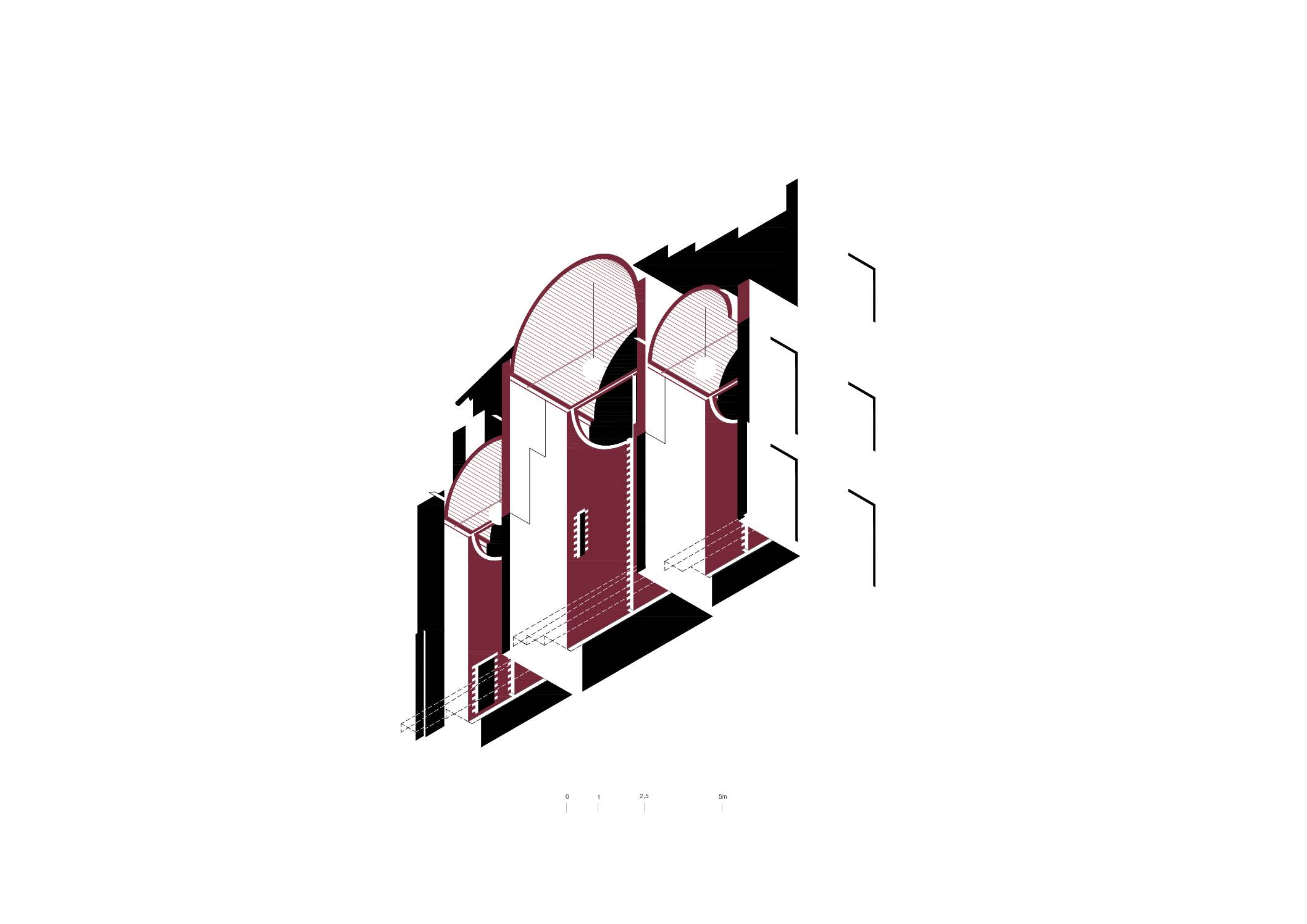 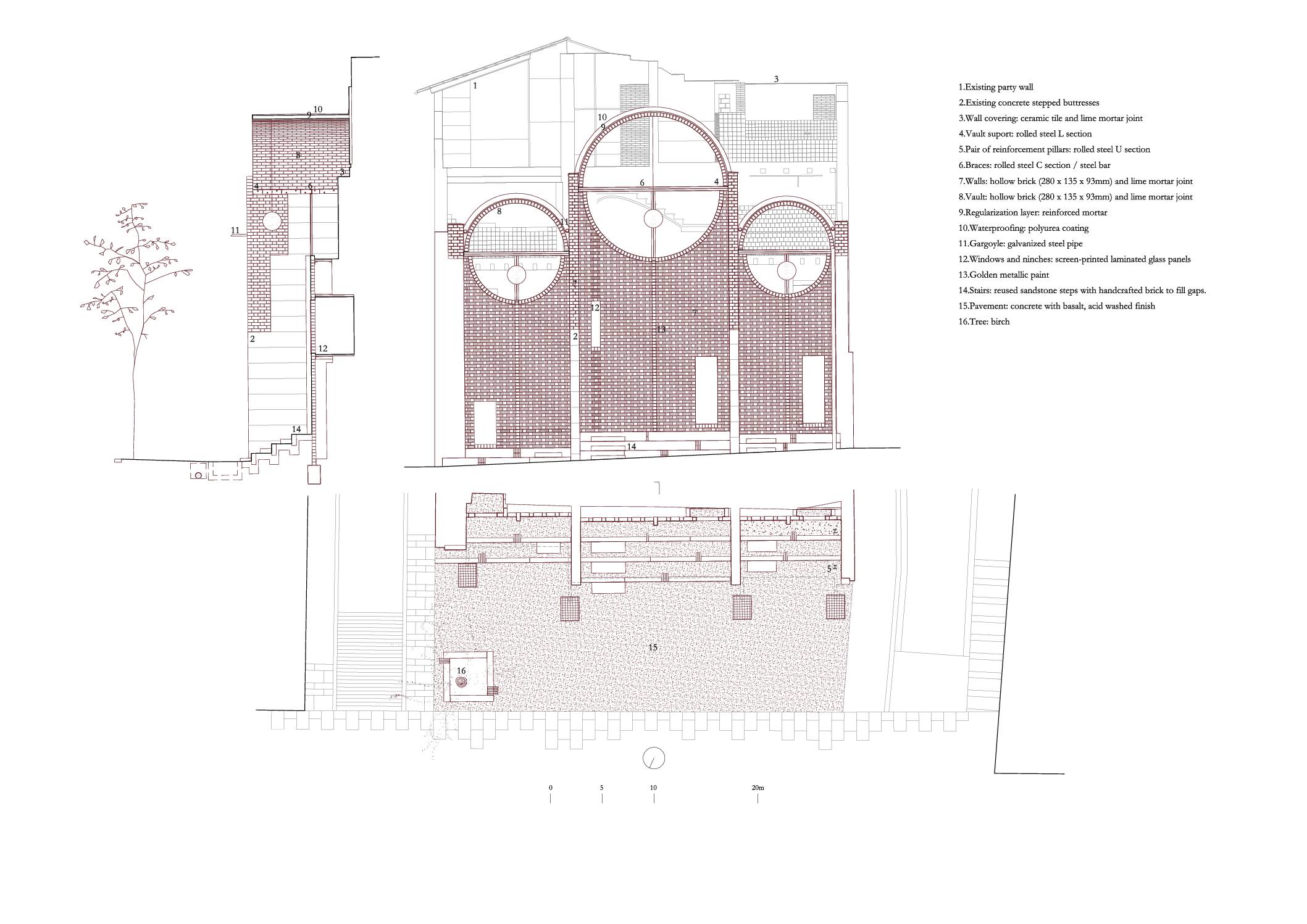 Demolitions are common in the historic center of Olot. For different reasons, the same consequences: abandoned lots, loss of urbanity, disfigurement of the street, destruction of the ordinary landscape. Given that half of the Can Sau house was affected by street alignment, it was all demolished, leaving an urban void characterized by a party wall and four stepped buttresses that faced the side façade of the church of the patron saint.

Upon request for a pavement project and an ongoing contract for a waterproof metal cladding, the assignment was reformulated. It was urgent to endow the space with urbanity, apart from guaranteeing the waterproof qualities of the party wall. In the compact city, the façades take responsibility for giving shape and character to the street.

An emergency scenery was built, that completes what the buttresses suggest, revealing in the background the traces of domestic activity marked on the party wall. A construction of three vaults and four niches is offered to the public space as a porous façade, accompanied by a minimum of stands. It is an unfinished and appropriable structure, a scenographic support for urban life.

The main structures are defined with hollow brick and lime mortar joint: it is appropriate to complete the load-bearing walls and solve vaults with a single sheet. It is also a common, local product that allows local bricklayers to be employed. The steel is reserved for the support of the vaults, braces and two pillars.

The intervention recognizes that the city is the result of continued construction on its own stratum and gives relevance to a conglomerate of previous layers. Emergency Scenery tells an unreal, symbolic story that requalifies this abandoned space.

The screen-printed glass panels and the performances in the niches, by the visual artist Quim Domene, are the result of an investigation to recover the memory of the important role that crafts and commerce had in the original nucleus of the town. They include geometric mosaic patterns by the local decorator Sadurní Brunet (1886-1958), printed fabric designs produced in the local textile industry in the 18th century or a list of shops and workshops that occupied the ground floors of this area.

The Tura church, confined between narrow streets, now has a public space to its lateral façade, presided over by the closed-off door dating from the previous temple of the XV Century. What was an abandoned lot is now a civic space that begins to catalyze activity. It is one more step to recolonize the most degraded part of the historic center. In a short time, two local associations already use it as an outdoor room for celebrations.

Surely, the appropriation of the structure transcends use because it allows multiple readings, depending on the affinities and experiences of citizens. There is a Can Sau for each person.