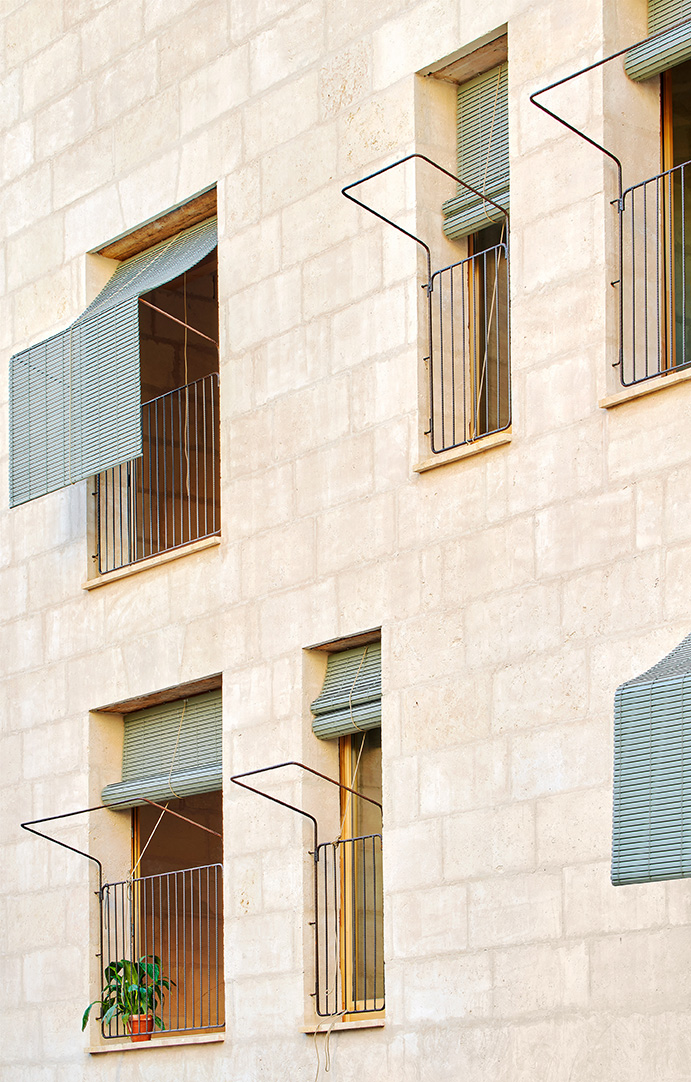 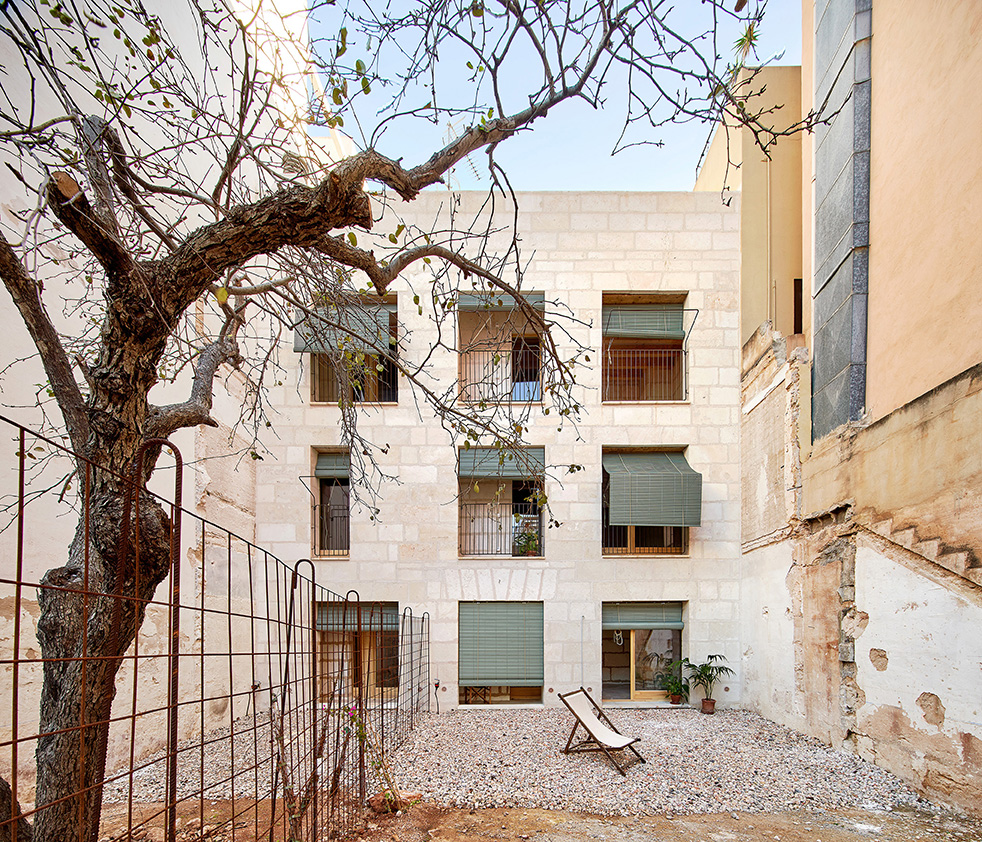 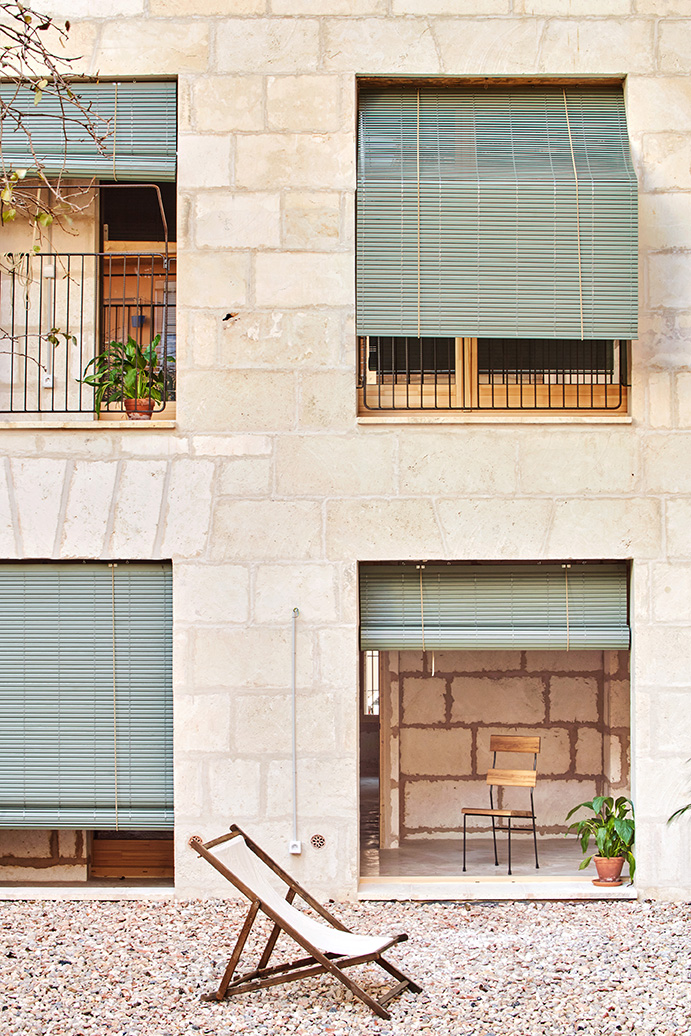 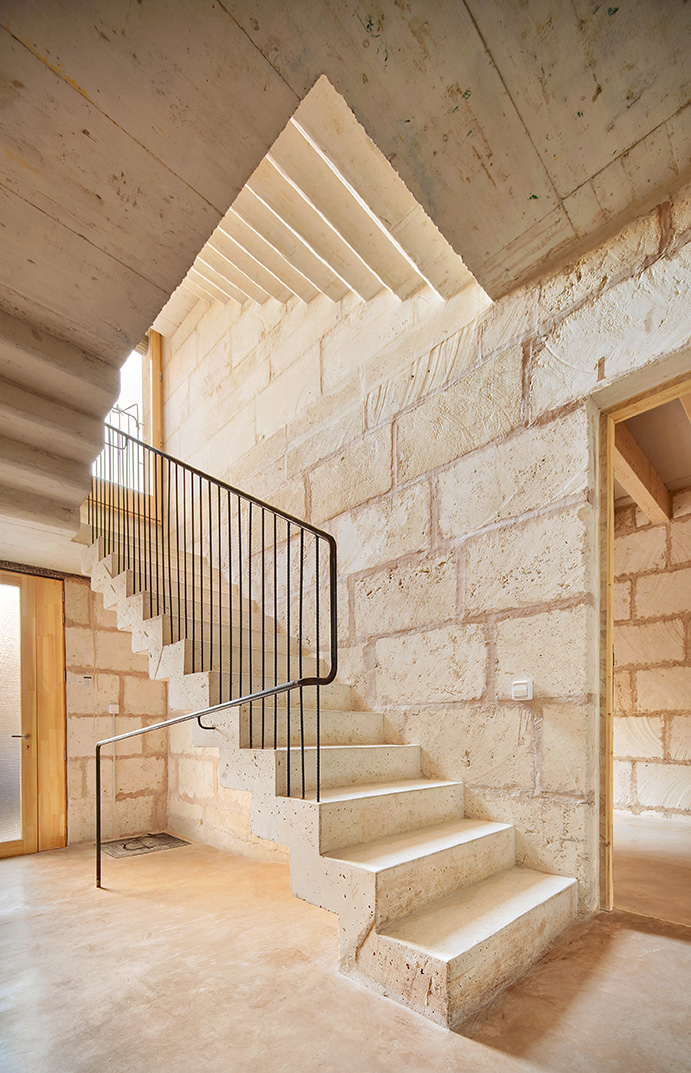 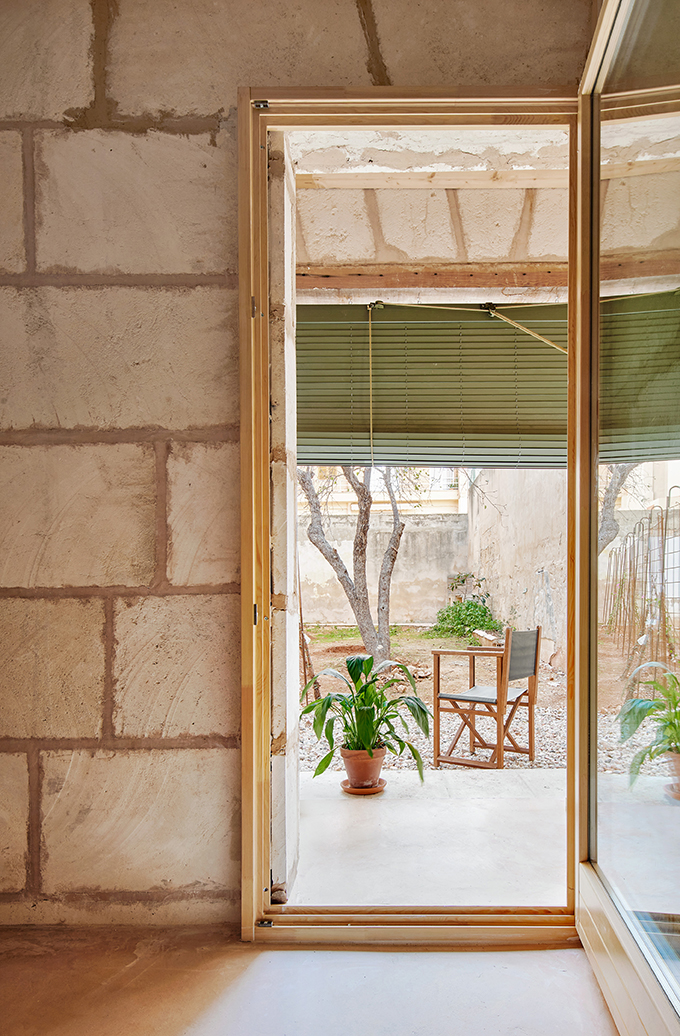 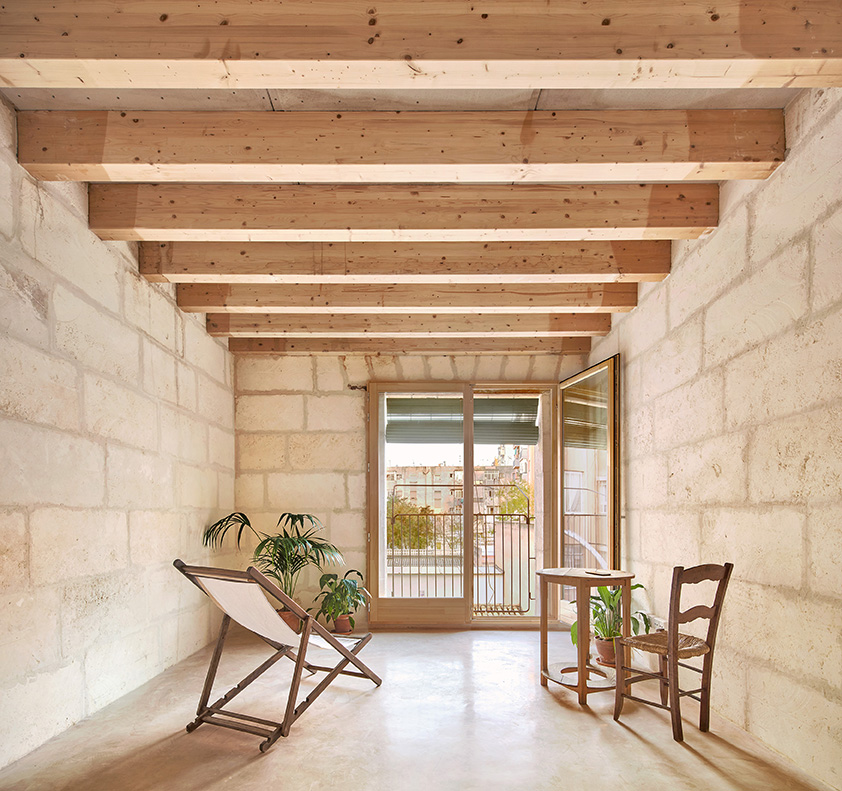 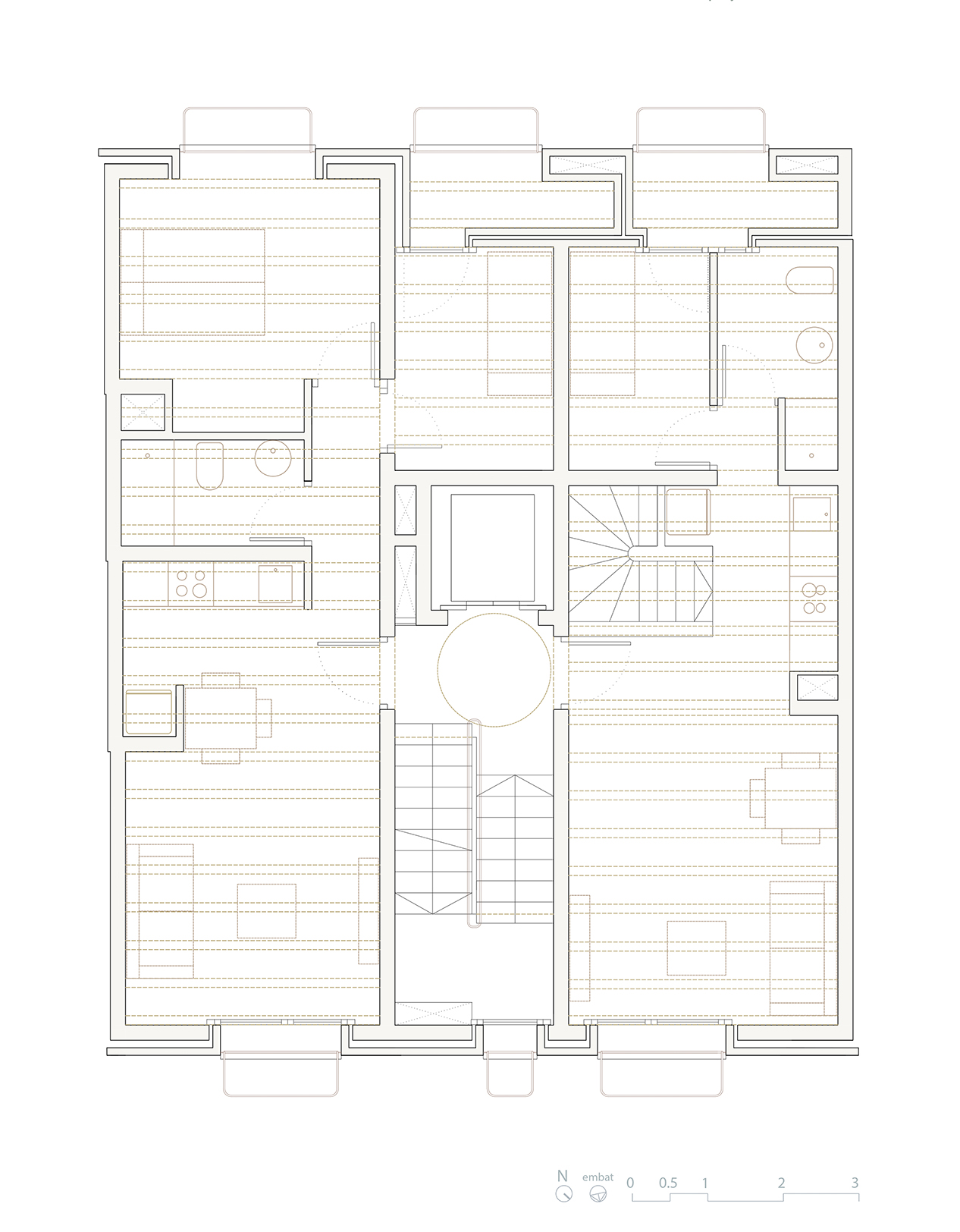 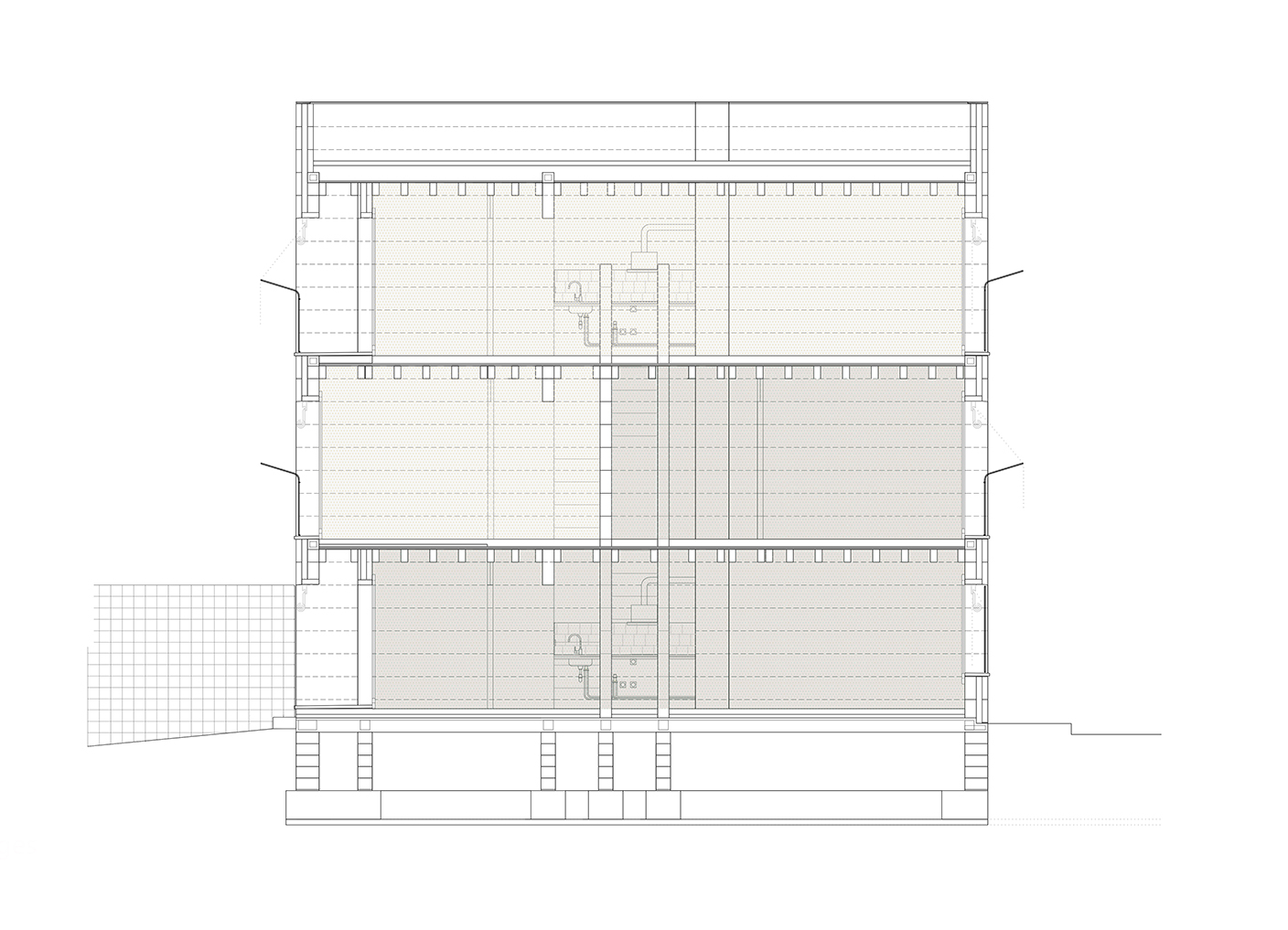 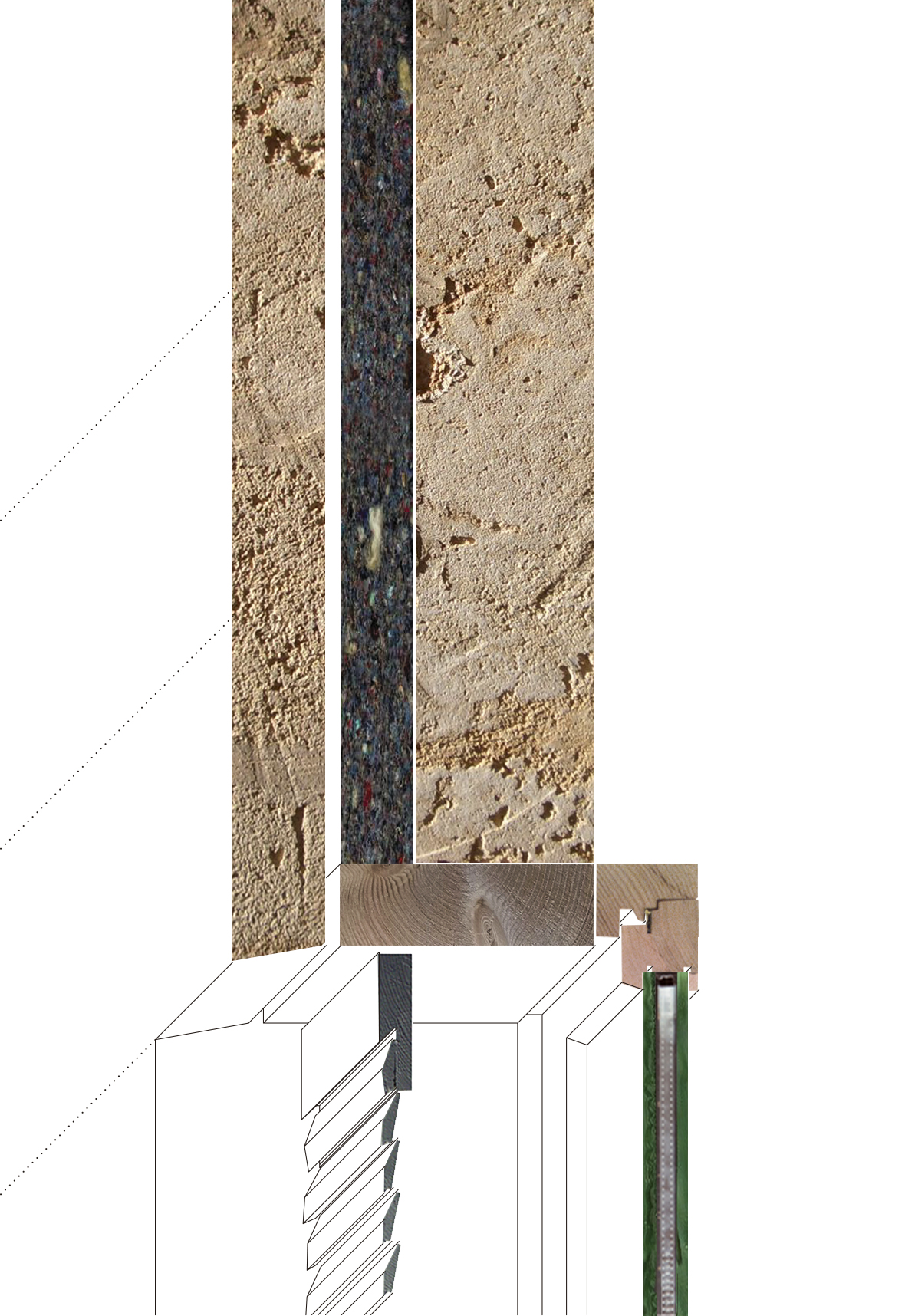 This is the first project completed by the Institut Balear de l’Habitatge – IBAVI (Balearic Institute of Social Housing) that continues the Life Reusing Posidonia research line in Formentera, in this case adapted to the Mallorca resource map.
The building is located in Son Gotleu neighborhood, which began to develop in 1943. Initially, the urban fabric combined the typologies of closed blocks with one floor or two floors terraced houses with a patio, with isolated single-family houses. During the 1960s, with the aim of accommodating the workers arriving from Spanish mainland who built the hotels in Playa de Palma, these single-family houses were replaced by blocks of flats following the line of the modern movement, built in the cheapest way possible without lifts that have become, eventually, a source of social conflicts. In fact, Son Gotleu is one of the neighborhoods in Palma with the highest index of social vulnerability and concentration of population with few economic resources. This conflict is another collateral effect of mass tourism in the 1960s and its reversal requires all possible public and private efforts.
The project recovers and makes visible one of the best features of the neighborhood: the small terraced houses built in marès, the local sandstone, and revealing the map of resources of the island, which is once again economically viable in the 21st century thanks to the thermal and acoustic of the technical requirements and the different European directives. The climate emergency makes it possible to reuse those systems that would have prevented such a climate crisis.
Marès stone, the industrialized material with the smallest ecological footprint in Mallorca, is the material used to build all the walls of the 3-story high building, except for the elevator shaft, which is made of white reinforced concrete, with the intention to comply with the earthquake resistant regulations. The objective is to demonstrate that the construction of load-bearing wall

At the comfort level, a long-term forecast of average temperatures has been made, considering a minimum useful life of the building of 50 years, so that in a scenario of a minimum global temperature increase of 2ºC, the architects decided to prioritize passive measures in the summer season, introducing inertia as a basic element of temperature regulation. This need for inertia is solved by using local stone, with a density of 2.160 kg/m3.
The distribution of the five houses, the maximum number allowed by the intensity of use established in 1/60 m2 buildable, takes advantage of all possible buildability by using the duplex typology on the right side of the staircase, where the two houses on three floors ara placed like a Tetris. On the left side of the staircase there are three simplex dwellings, one per floor. The houses are peasants and enjoy cross ventilation.
The building is A energy class, and the production of ACS is carried out by means of collective aerothermal pumps located on the roof, supported by a battery of photovoltaic panels.