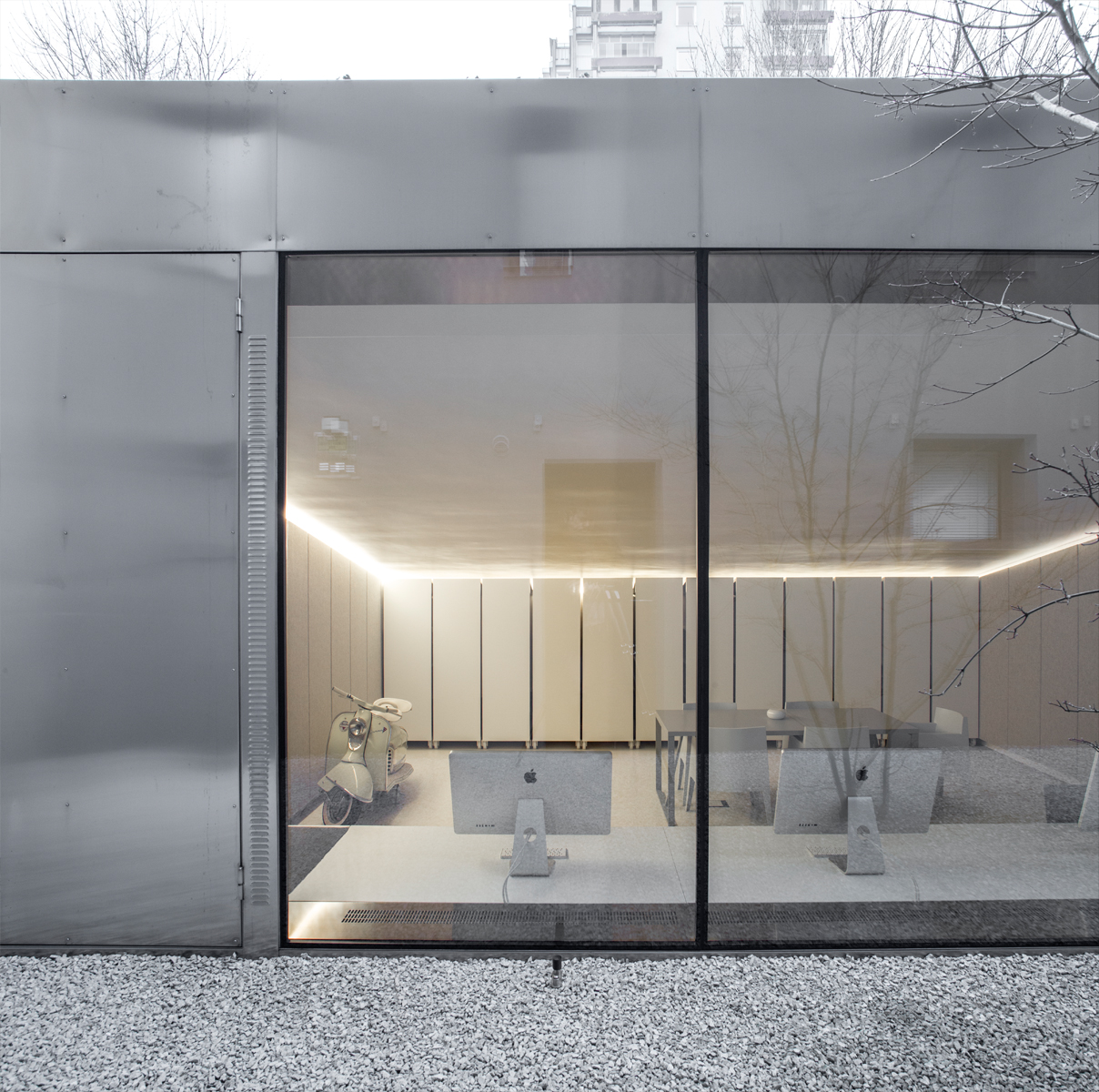 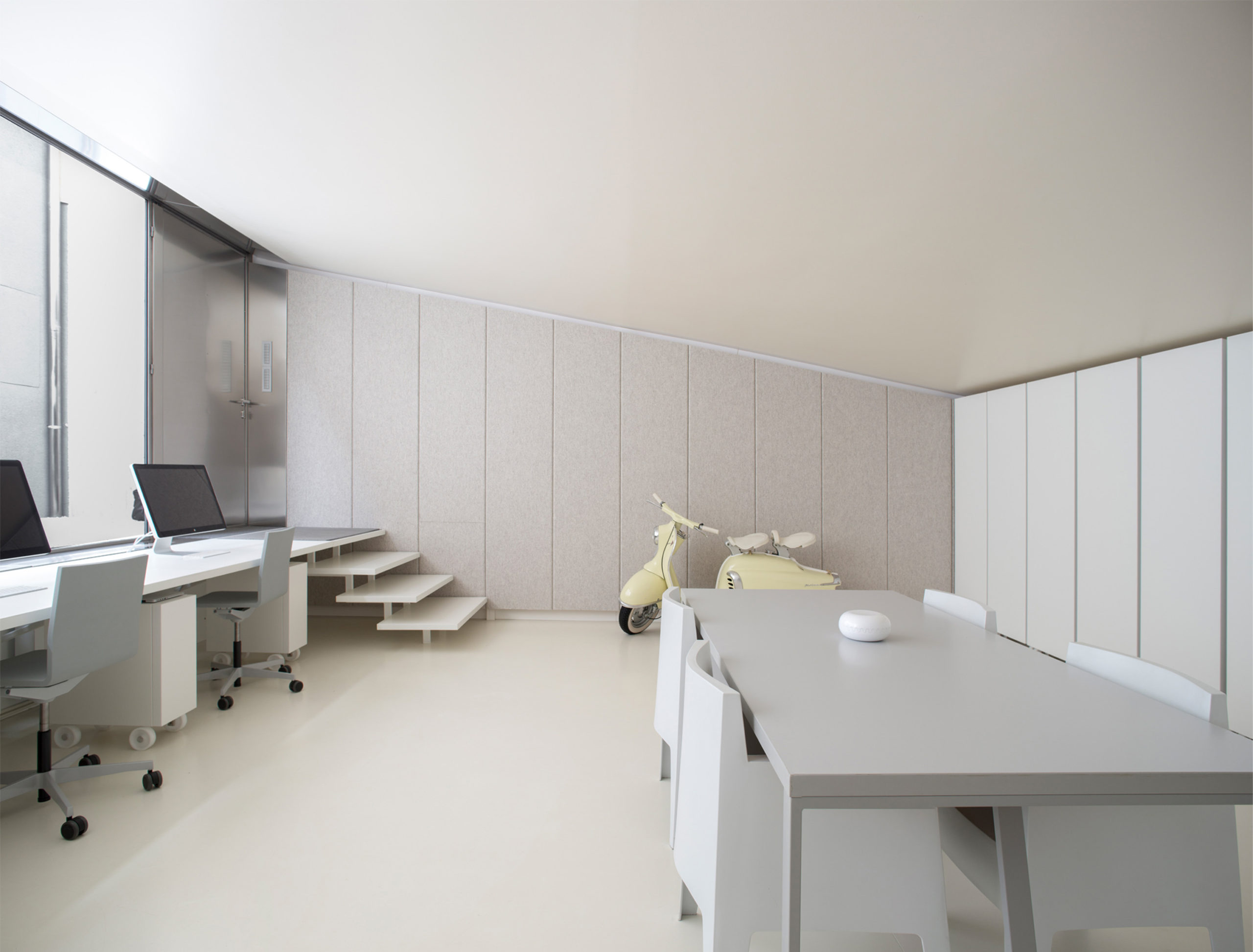 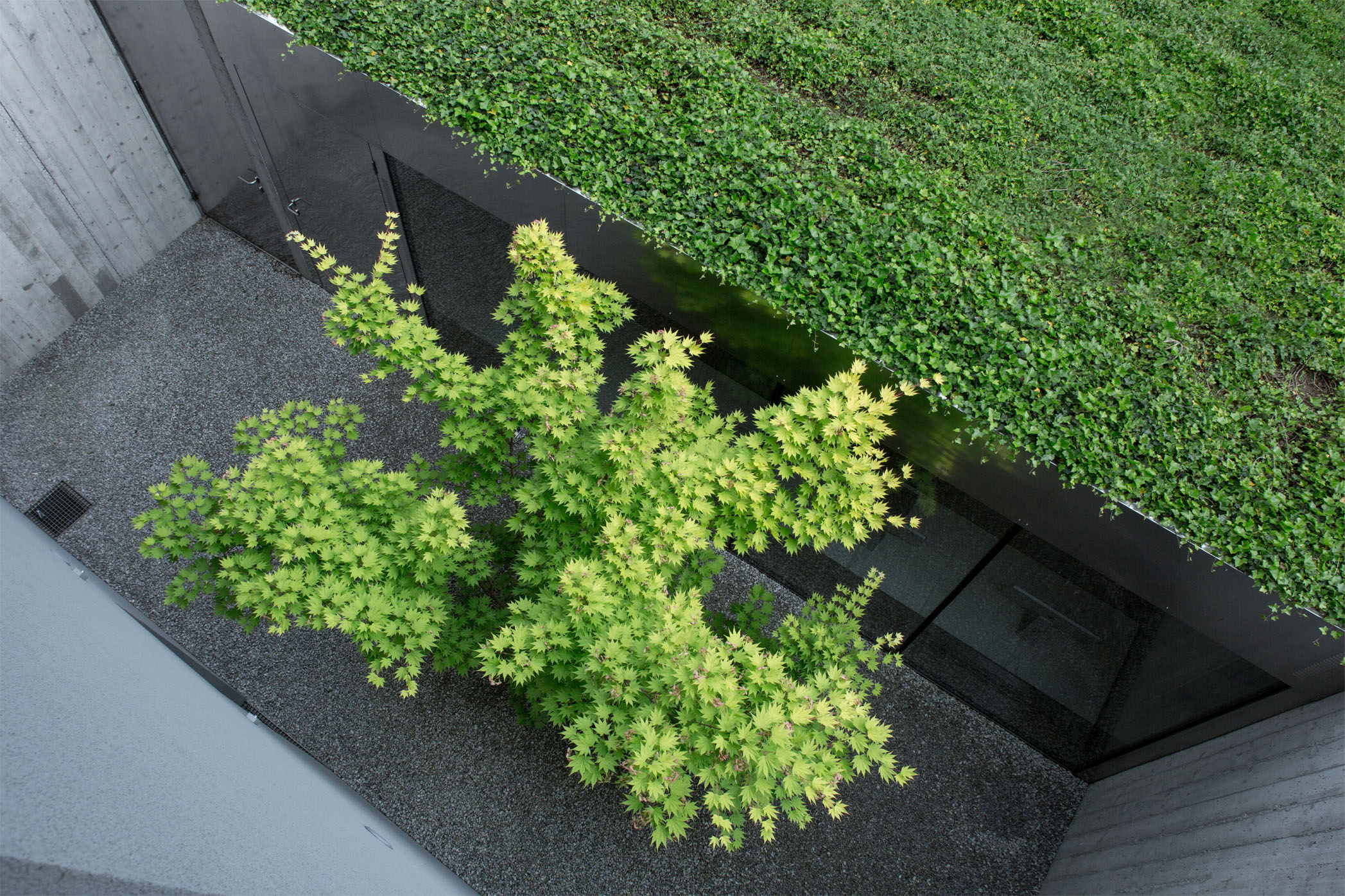 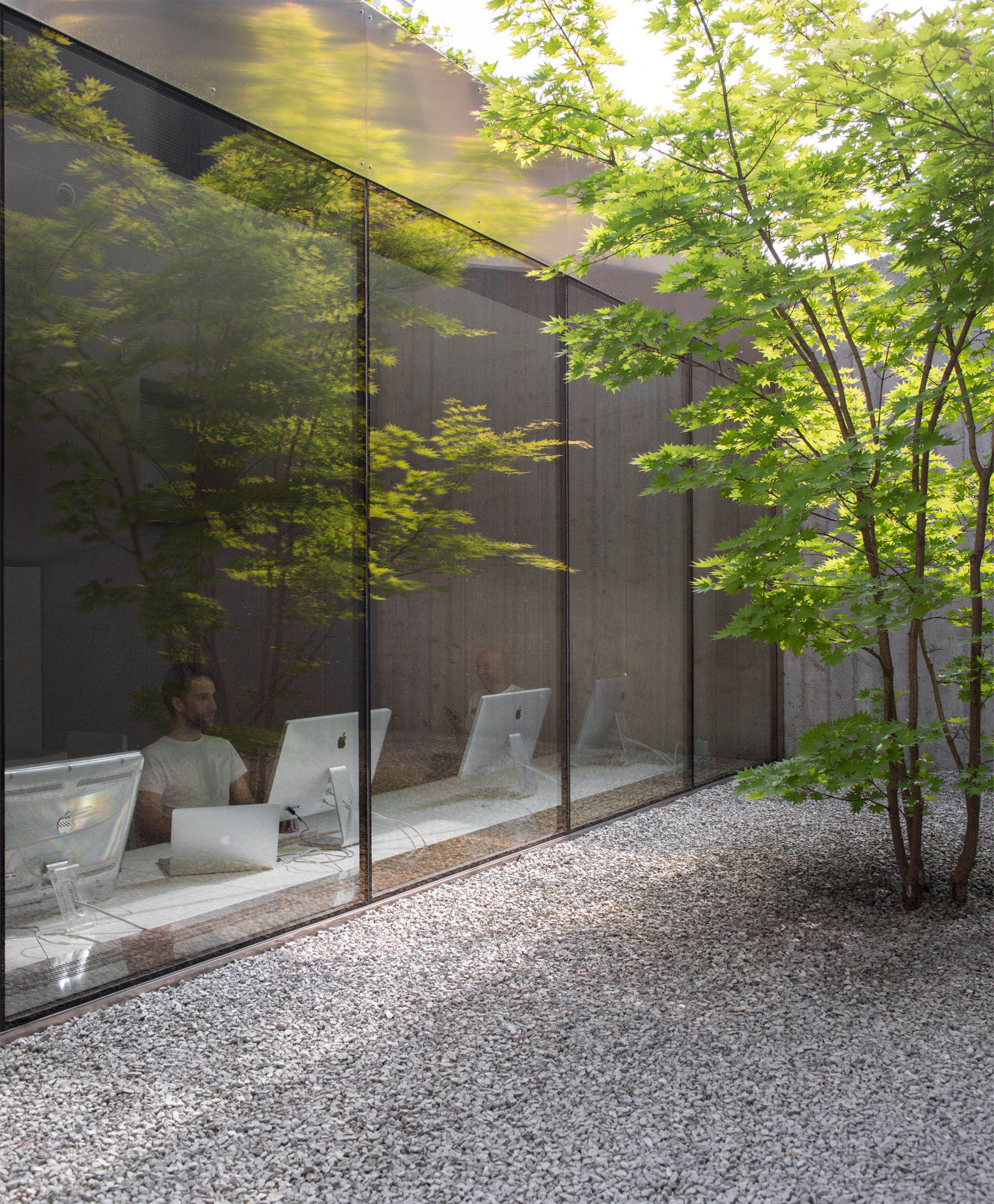 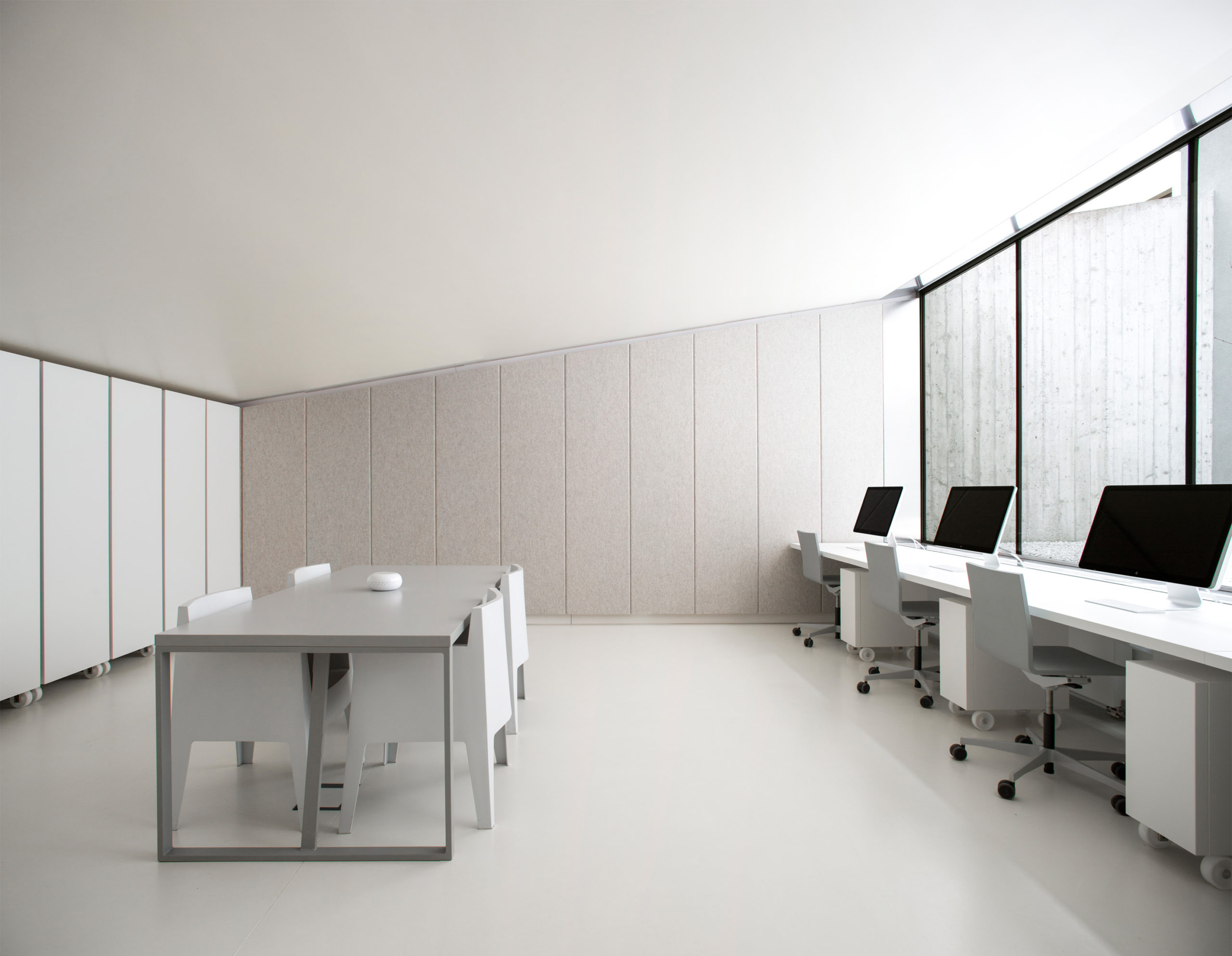 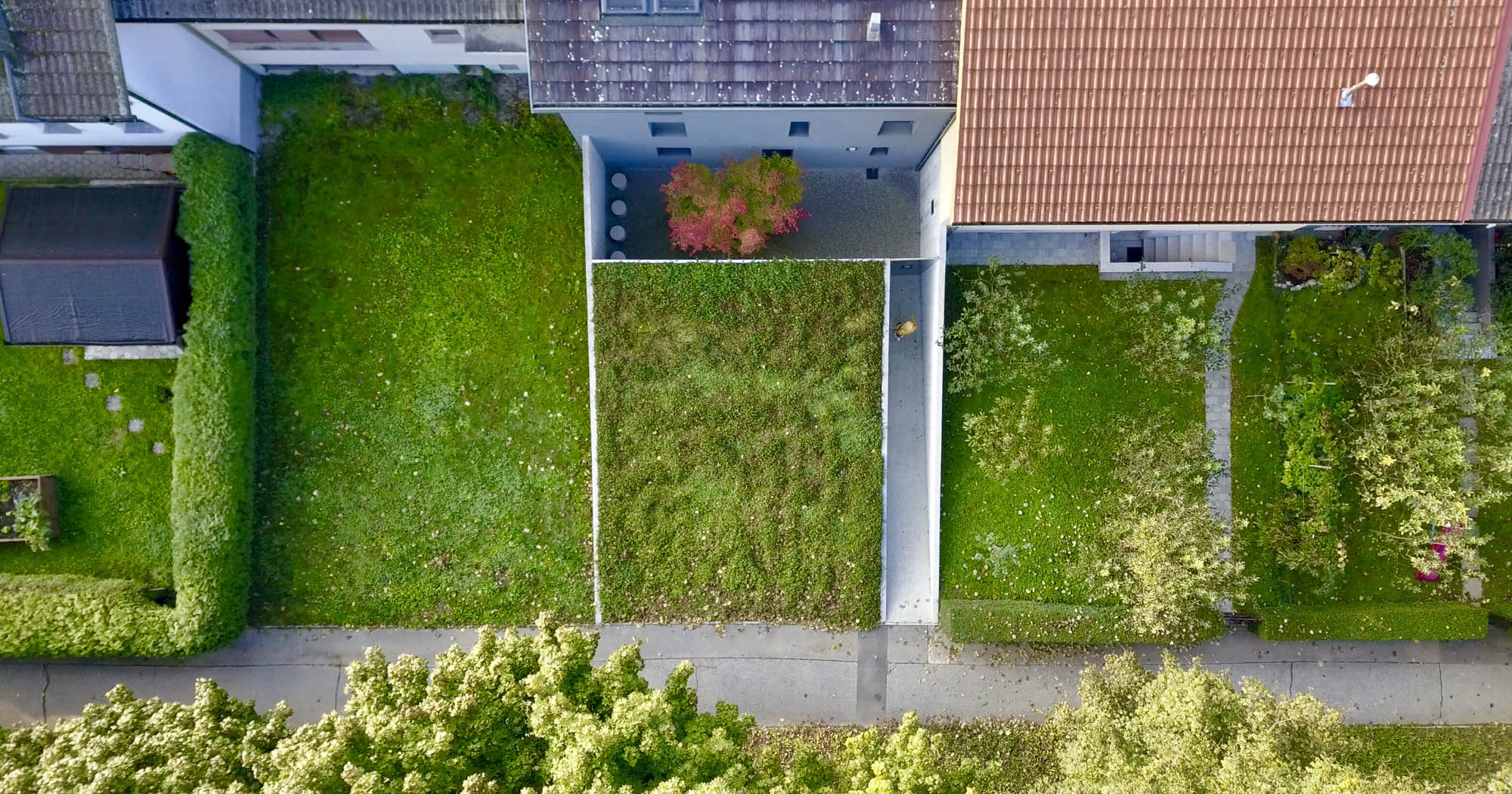 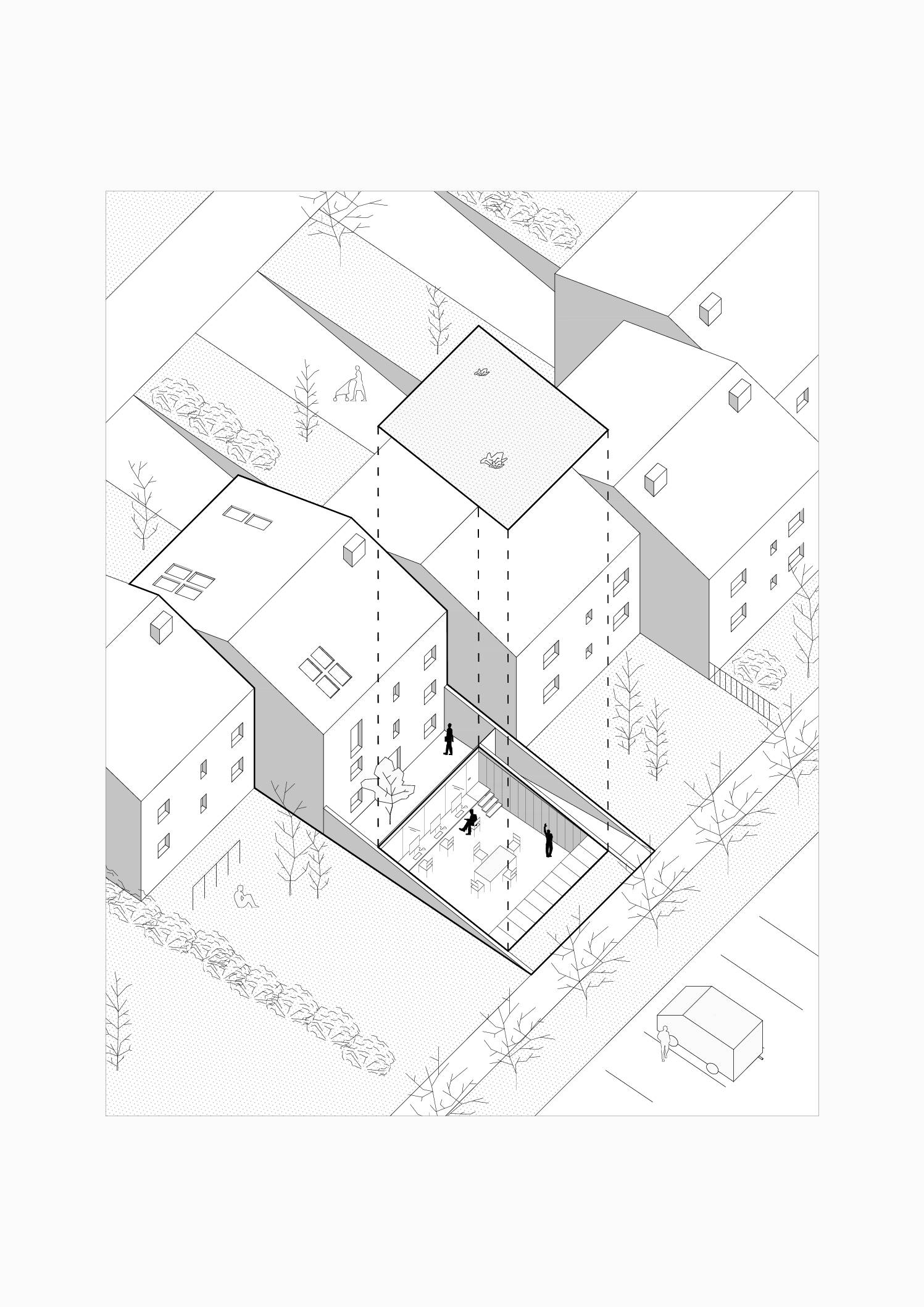 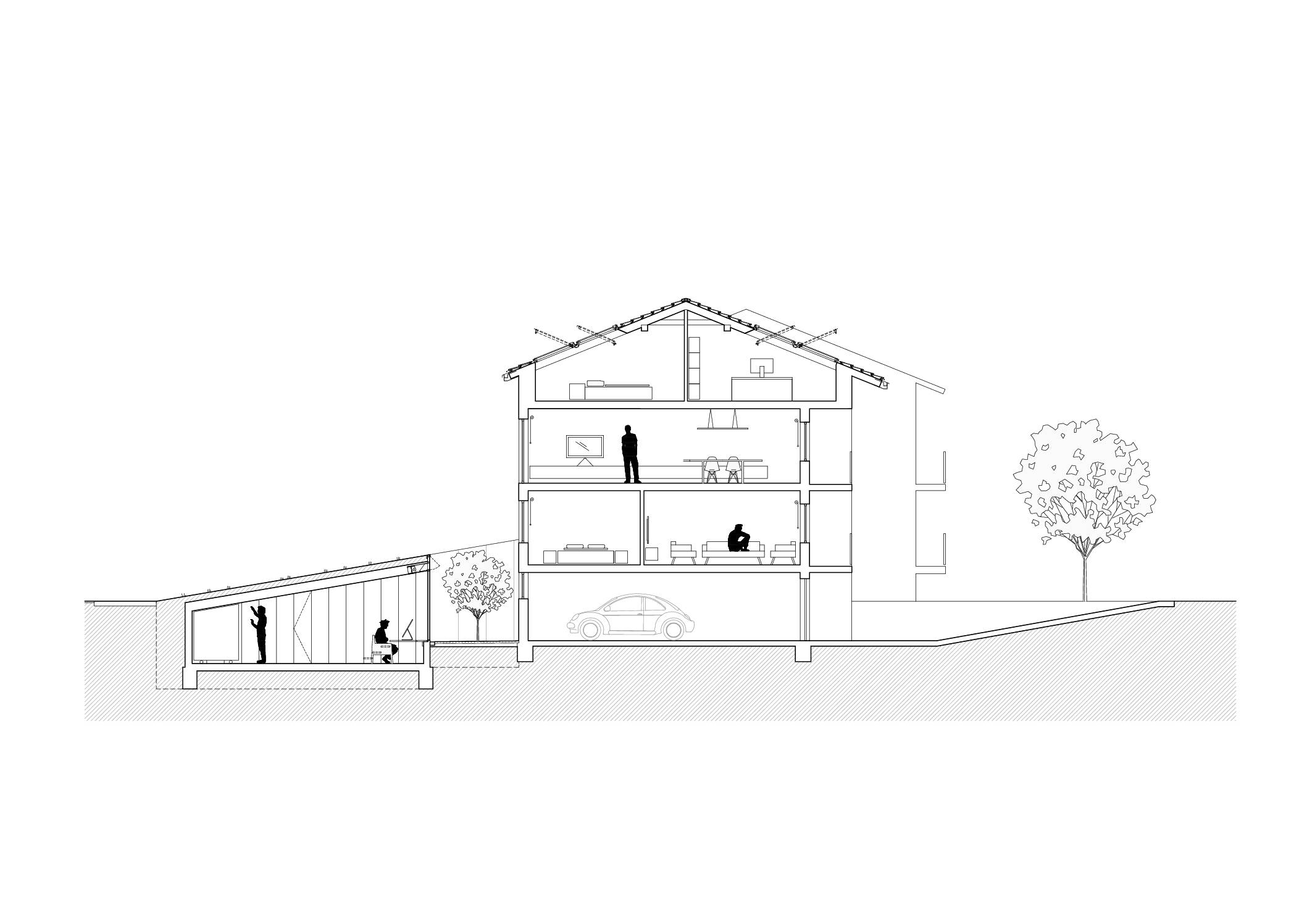 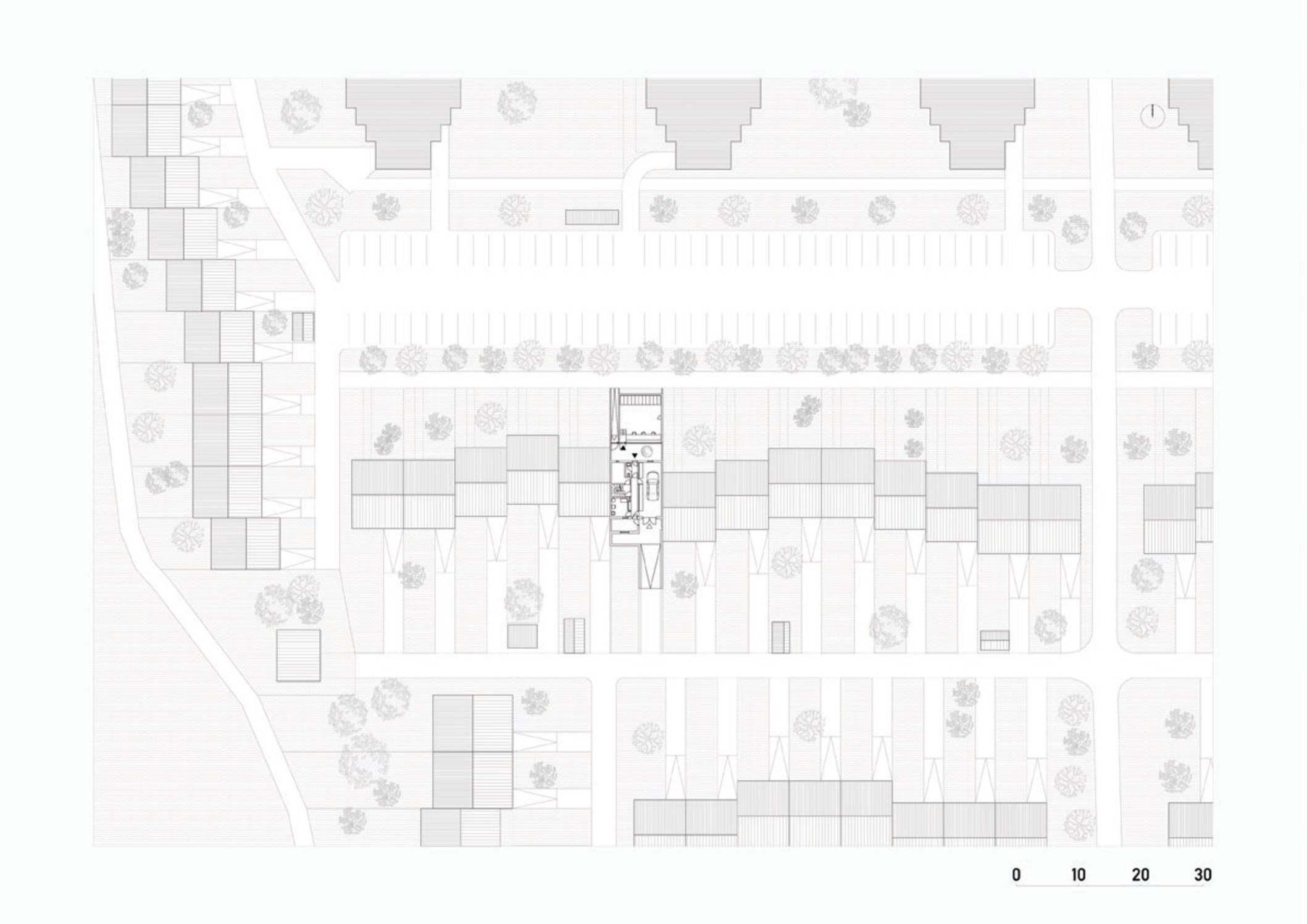 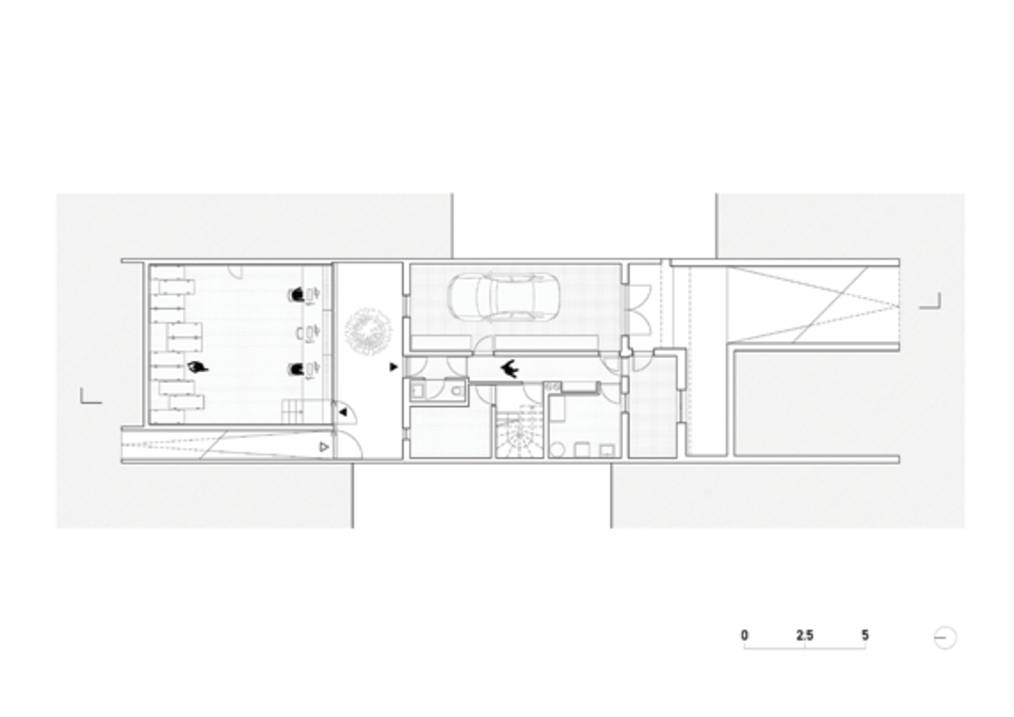 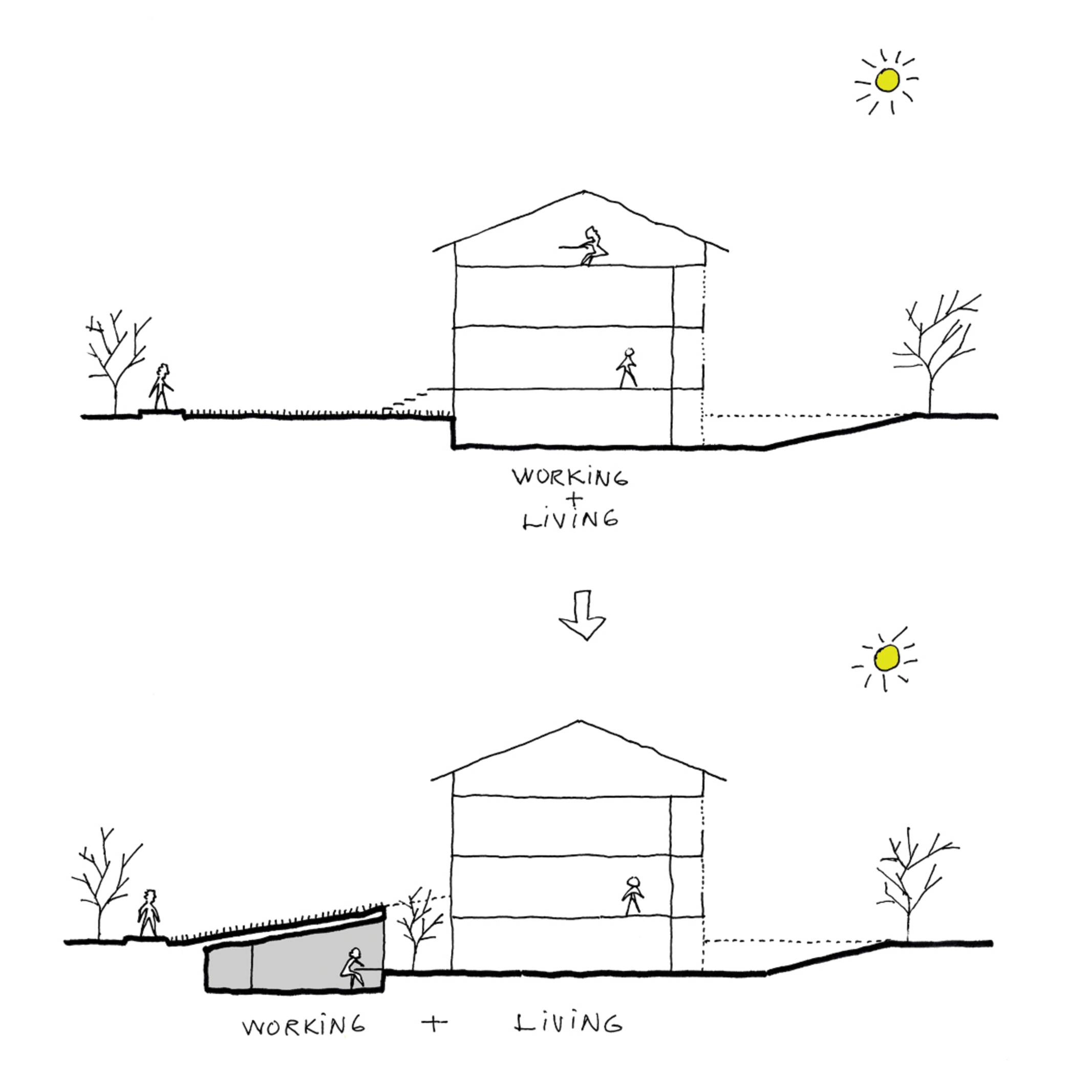 To an industrial designer’s intent of living and working together, we replied with a design studio experiment – a hidden underground addition in the unused backyard of a typical row house. Situated in a ‘70s suburban housing area of the well-preserved medieval town of Škofja Loka, the studio’s green roof is a mere incline in the former north-side backyard, located right next to the public walkway. On one side, a segment of it is cut out to make room for an entry ramp leading to a secluded atrium and further on to the studio. The atrium is conceived as an outdoor foyer, providing the studio’s only light source.
To emphasize the totality of the inside-outside connection, the atrium’s ground extends inside the studio to level with the integrated work desk surface. A system of wheeled cupboard modules was developed so that the studio, which functions primarily as a working space, can occasionally also serve as a showroom. The mobile furniture is usually stacked against the back wall of the studio, but allows for an endless variety of configurations which transform the tiny space for numerous scenarios. They can be used as storage as well as a temporary exhibition in case of events. Felt clad side walls ensure proper acoustics, while the rough concrete structural walls juxtapose the industrial design precision of the custom made stainless steel door and window frames. Tiny, precise and slow in implementation, it took 15 years from the first sketch to the meticulous execution, carried out in part as a self-built project of Studio Miklavc.

This project was a response to an industrial designer’s intent of joining living and working in the attic of a typical 70’s row house. We turned it into proper workplace – a design studio for 4-6 designers with a separate access from a public sidewalk. The hidden underground studio in the unused backyard is addressing the current crucial topic of work at home and topic of extending working into outdoor / patio. This project opens up an individual space found in typical suburban housing and tries to redefine it including a collective space for work. It offers a model for small entrepreneurs to open their studio next to their home and regenerated the neighborhood into a lively community.