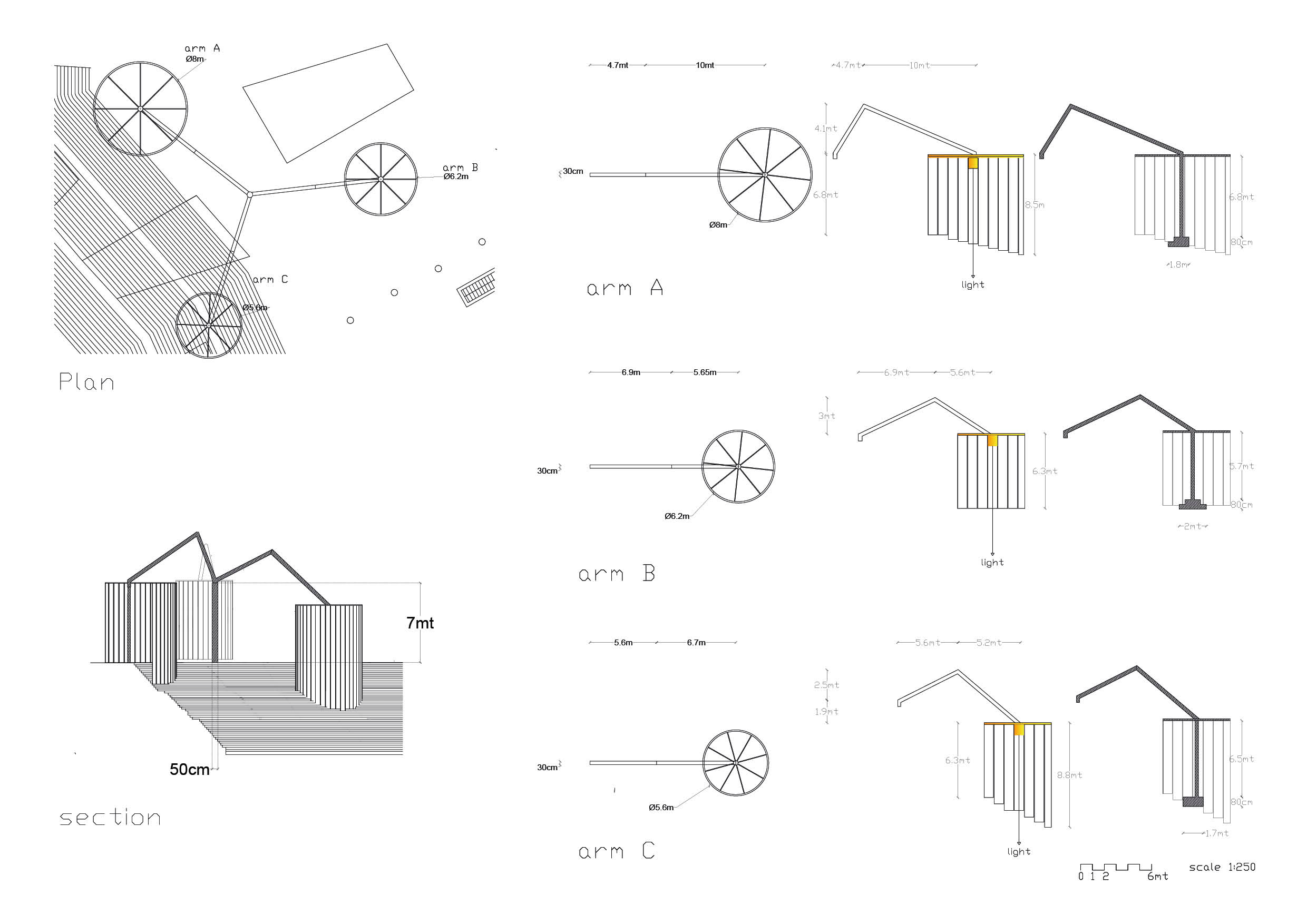 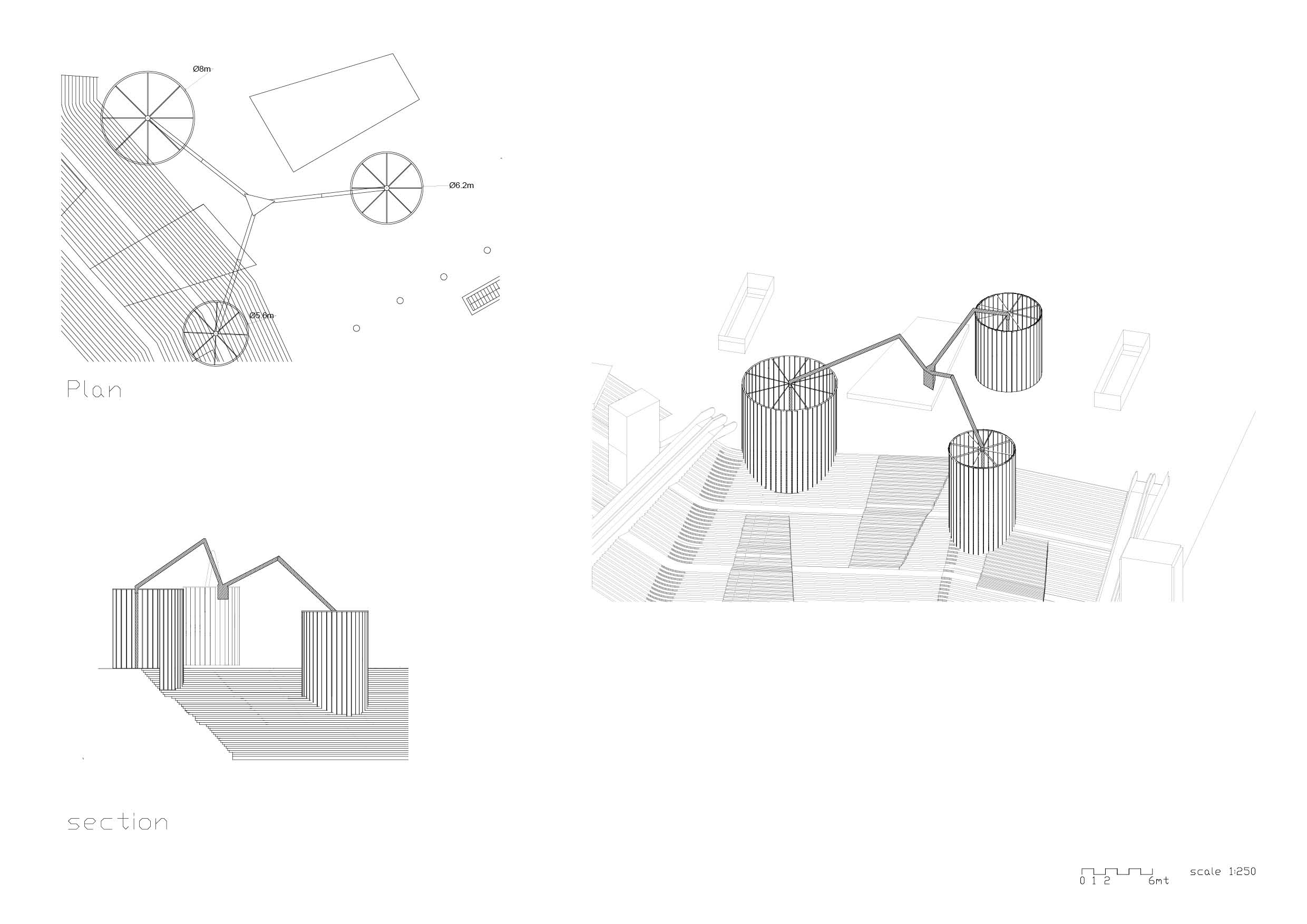 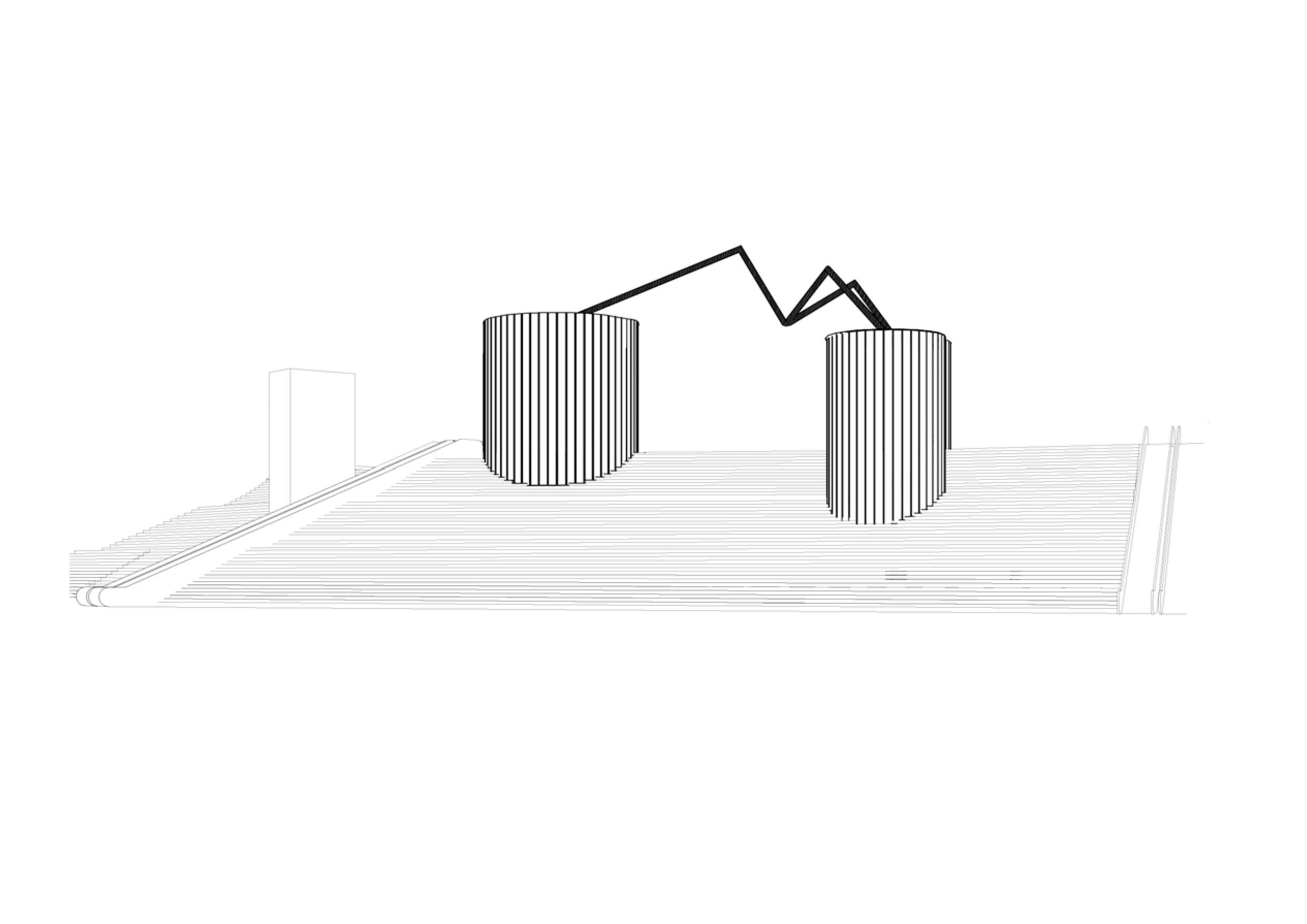 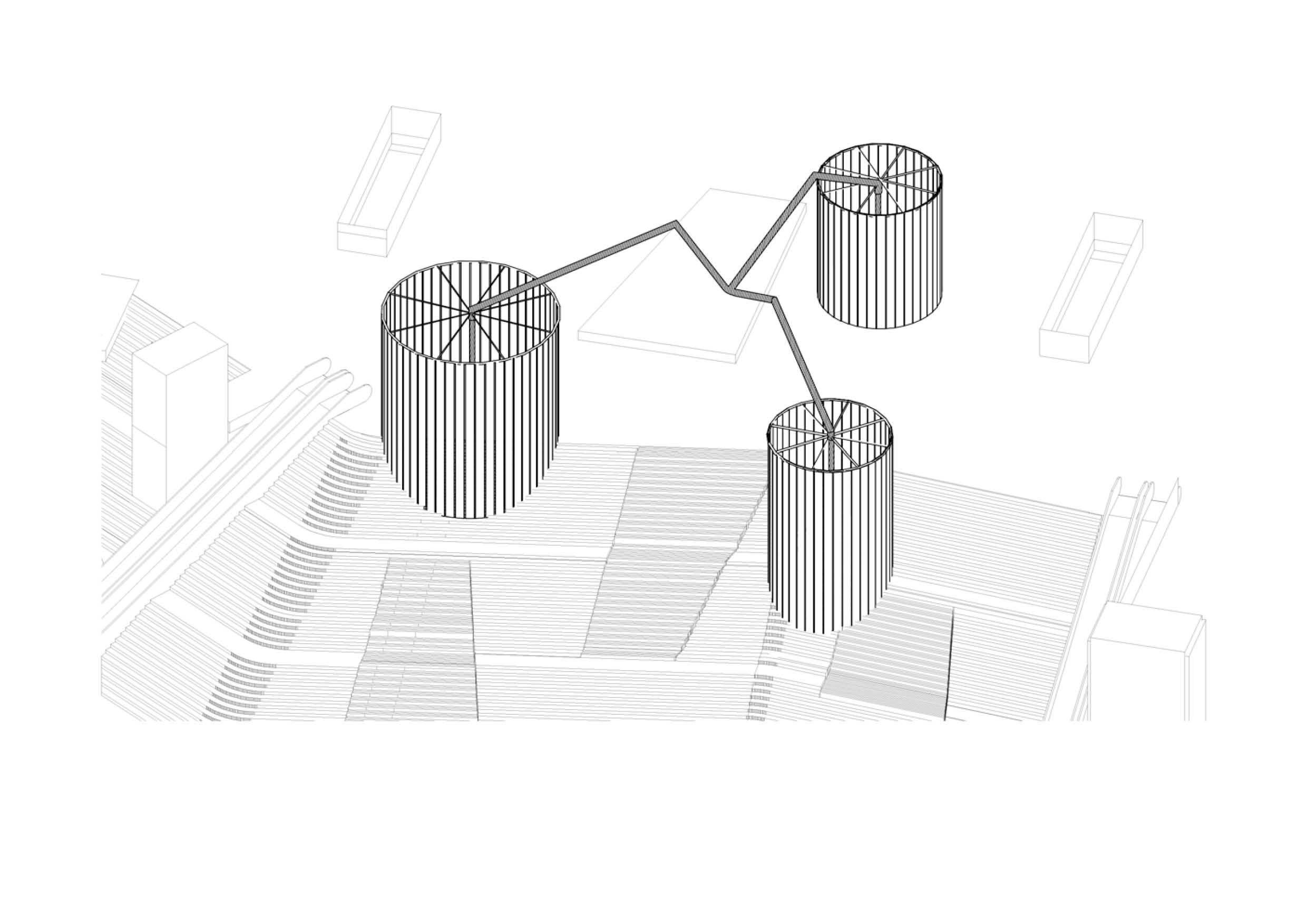 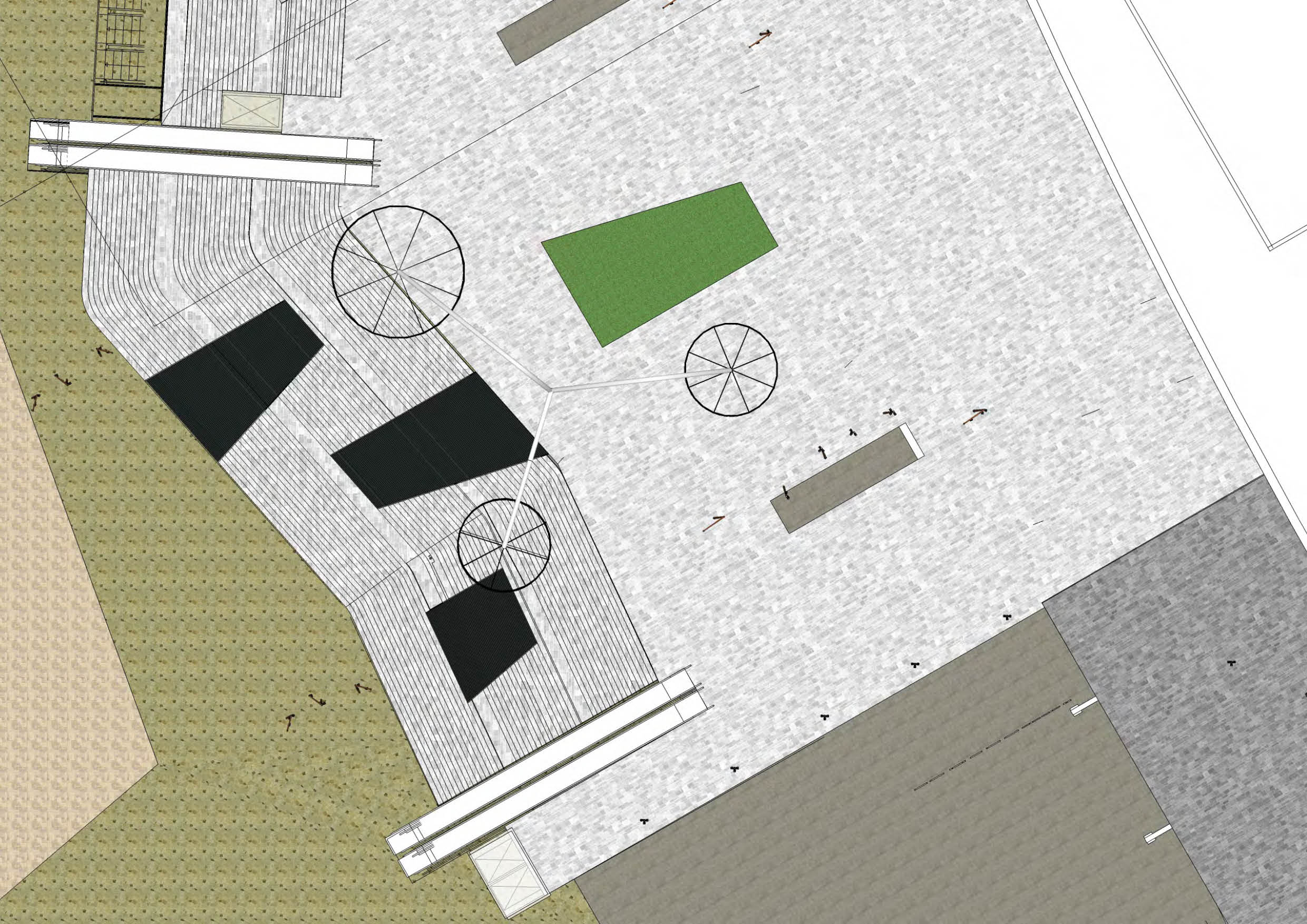 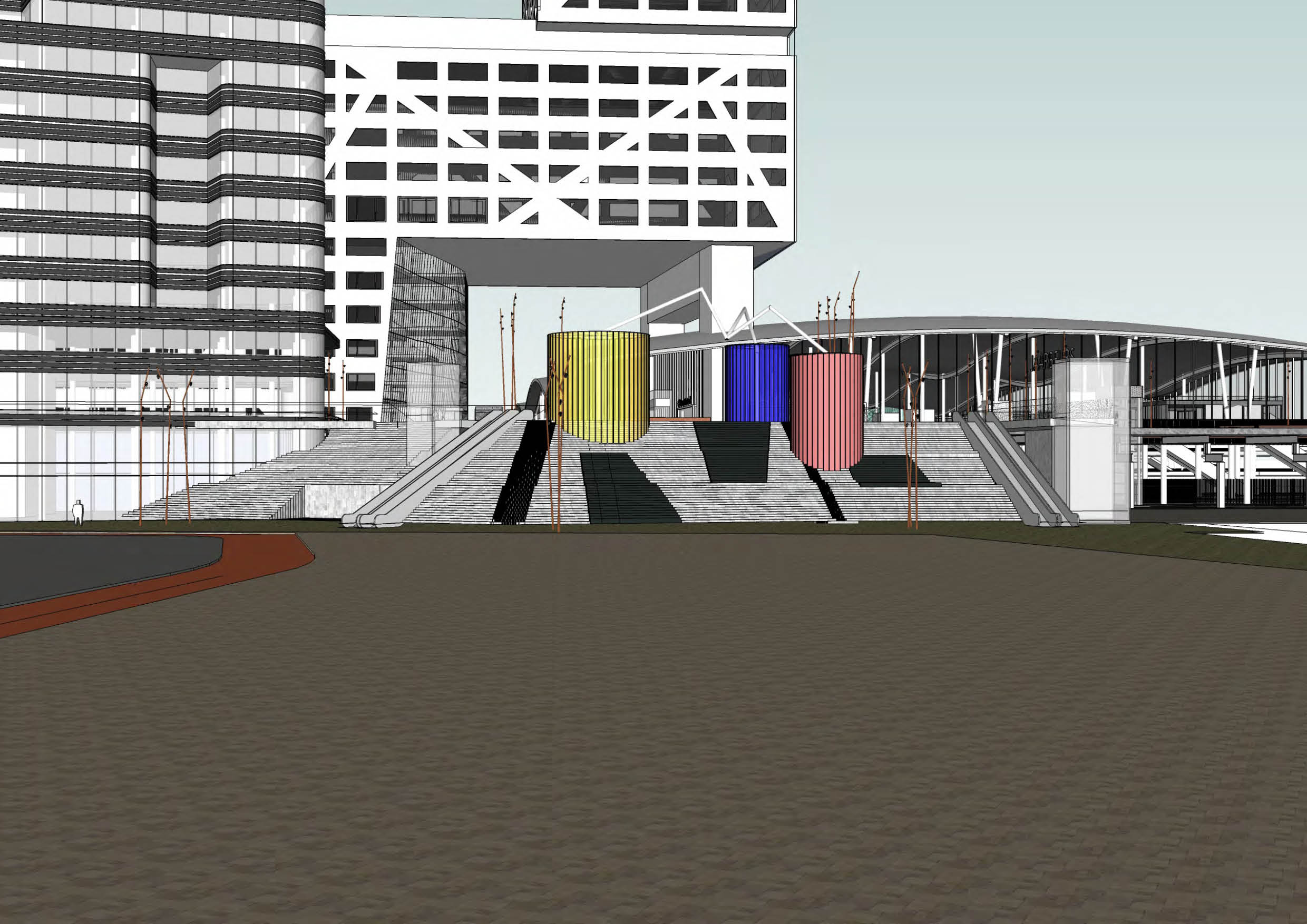 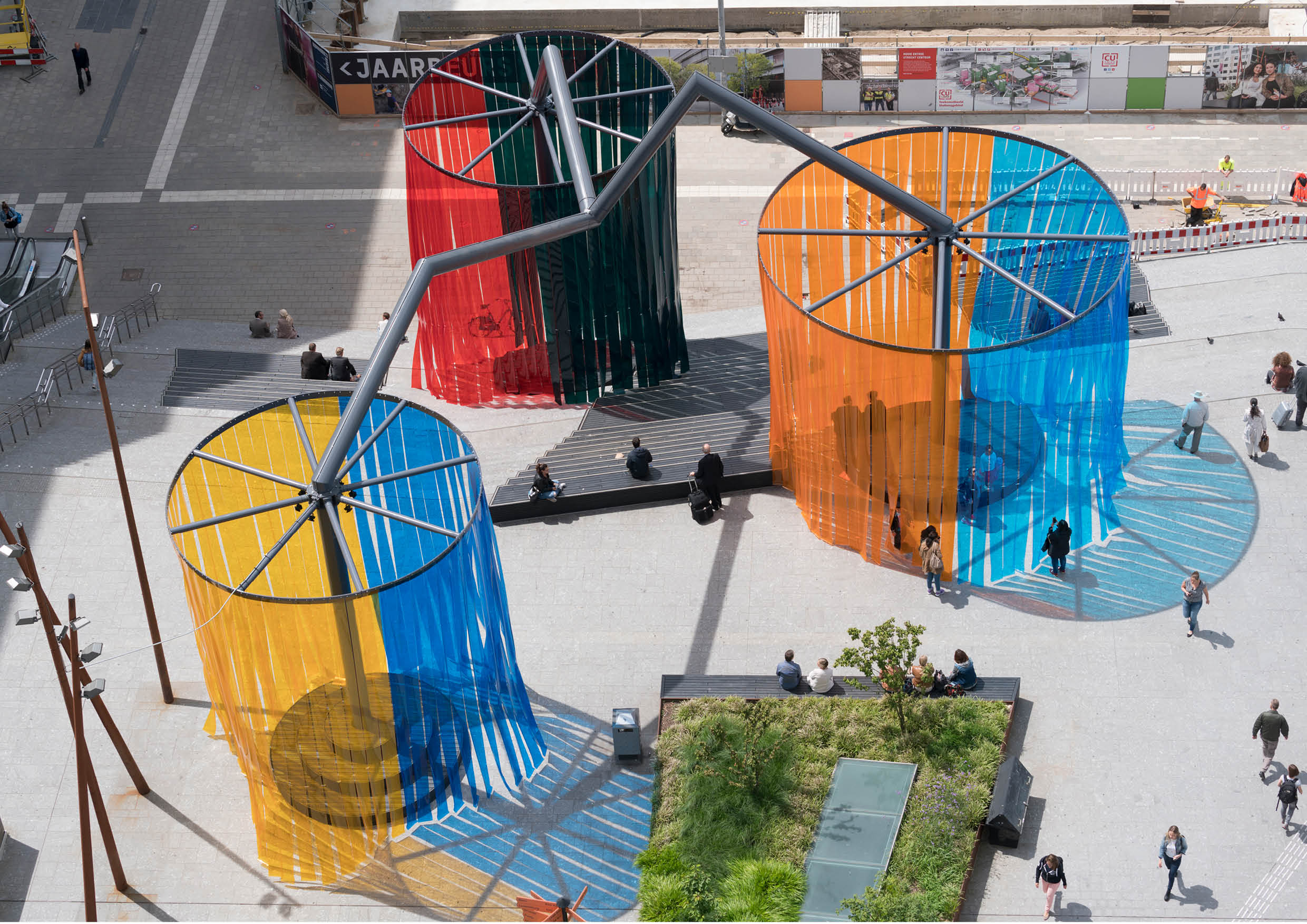 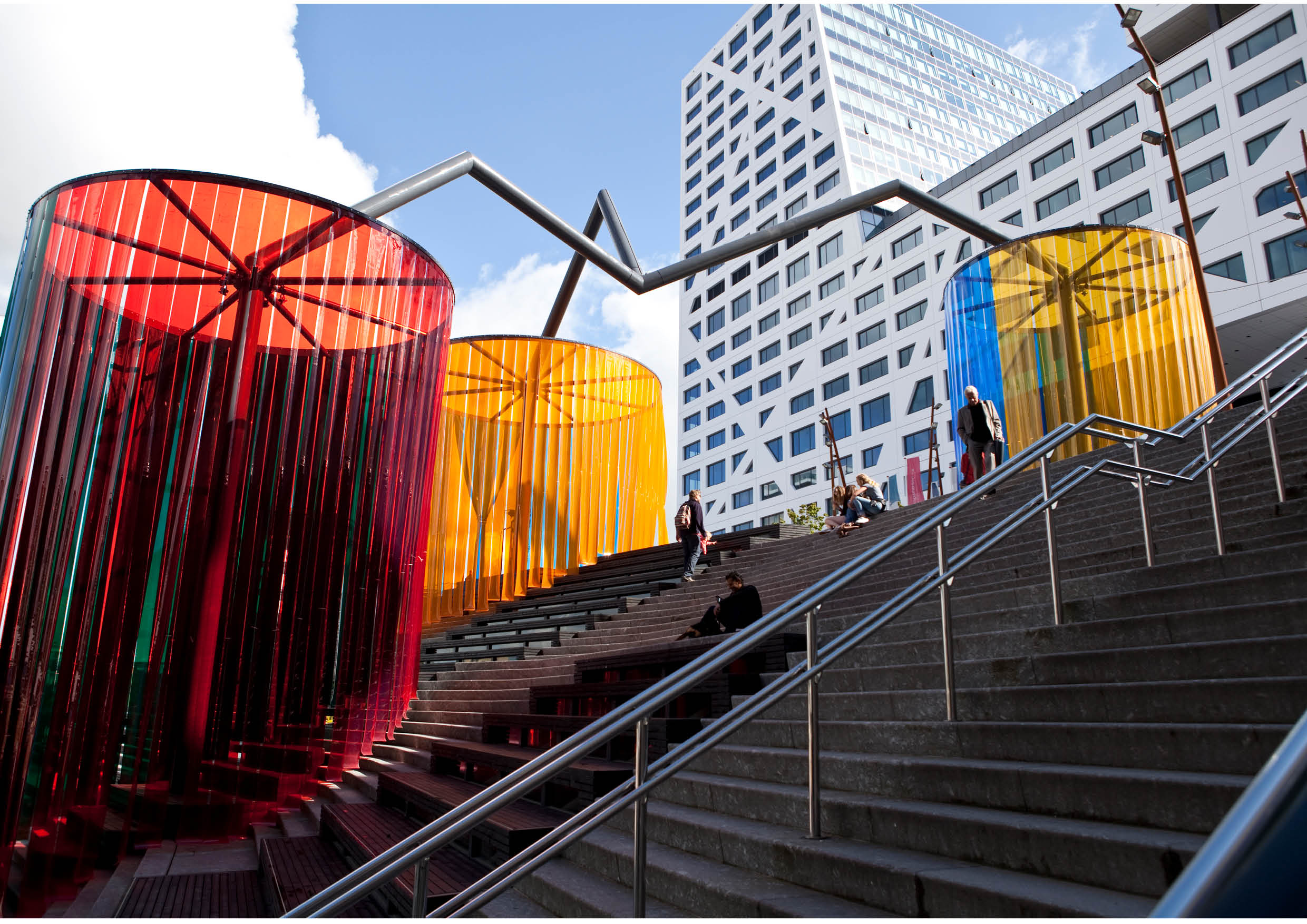 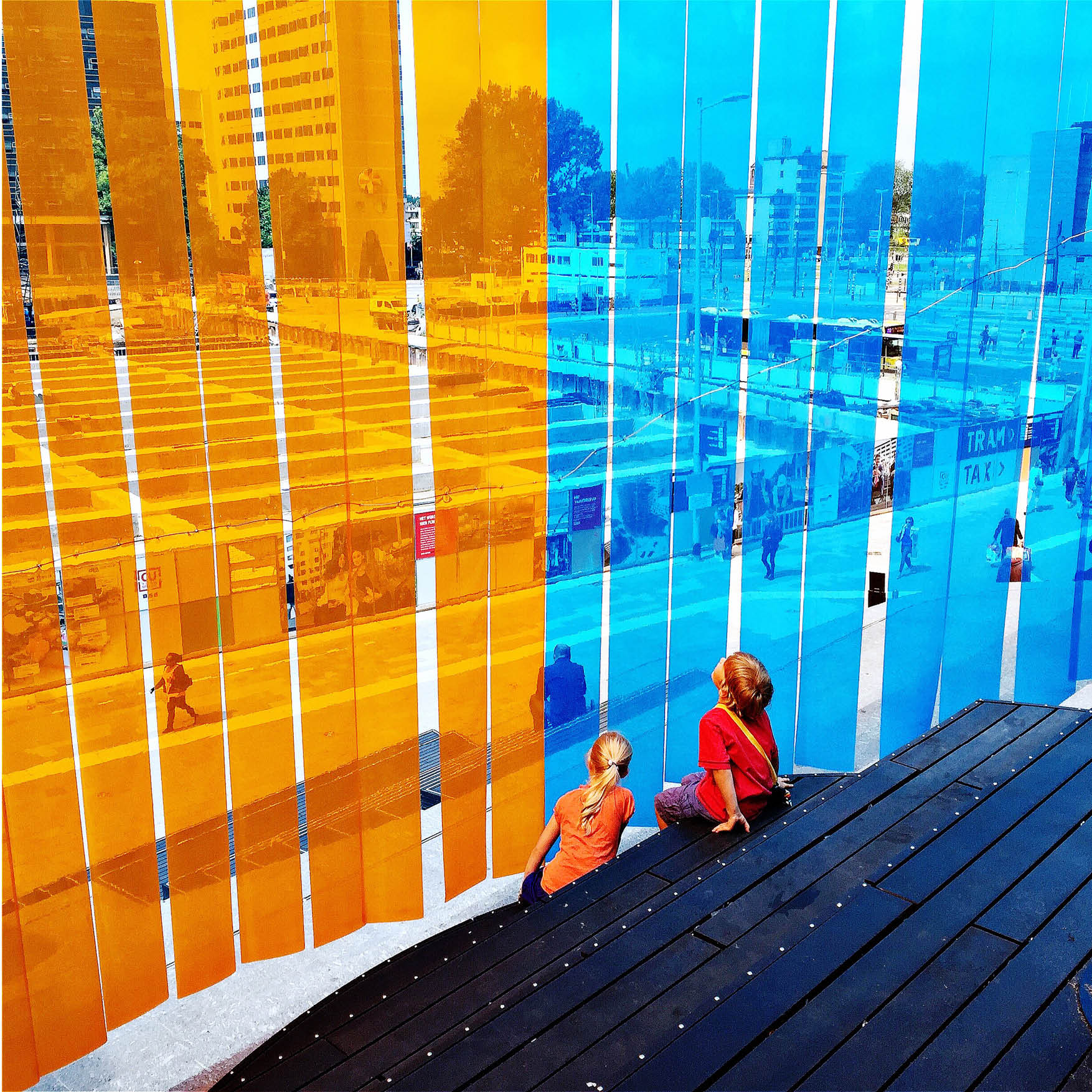 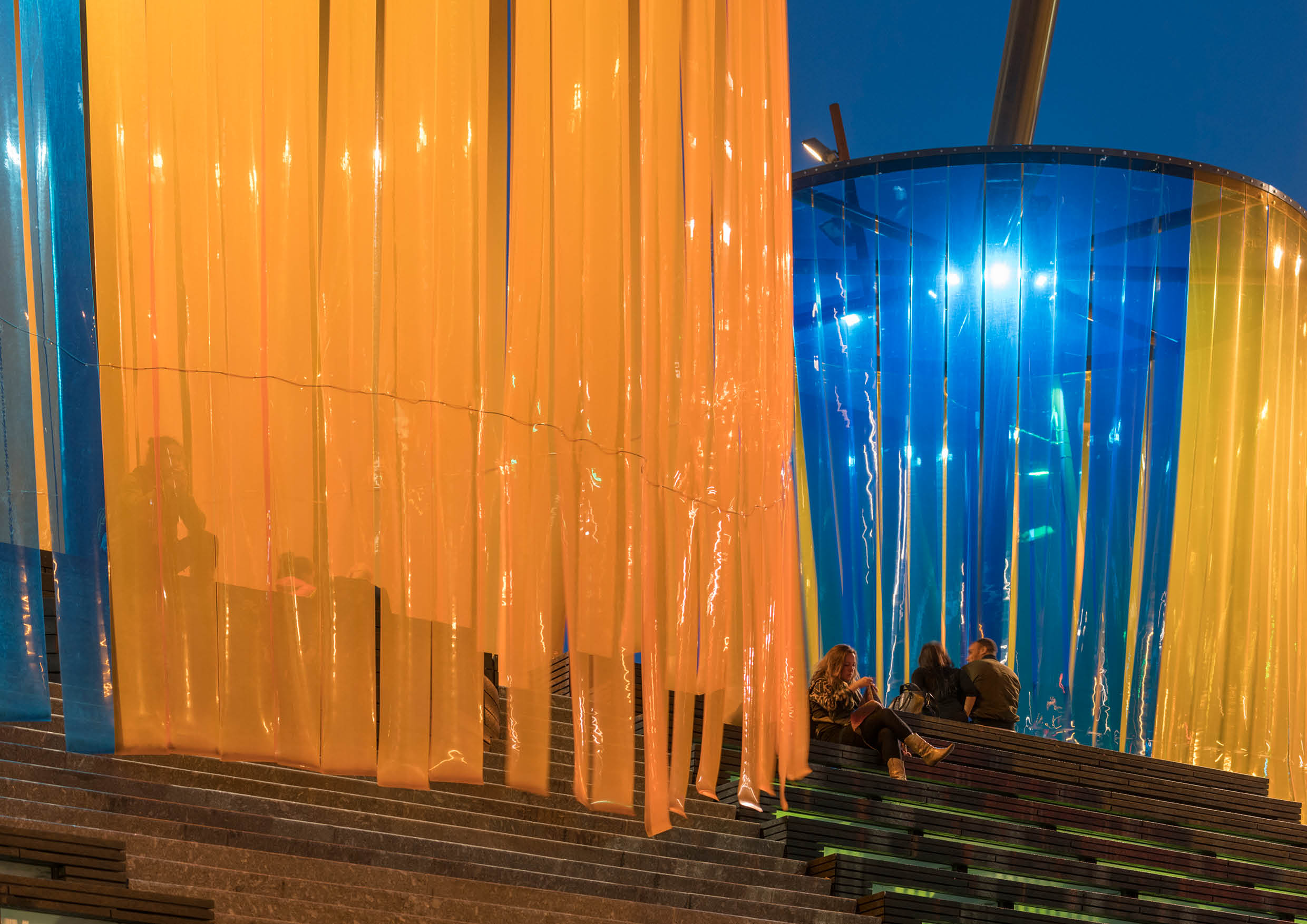 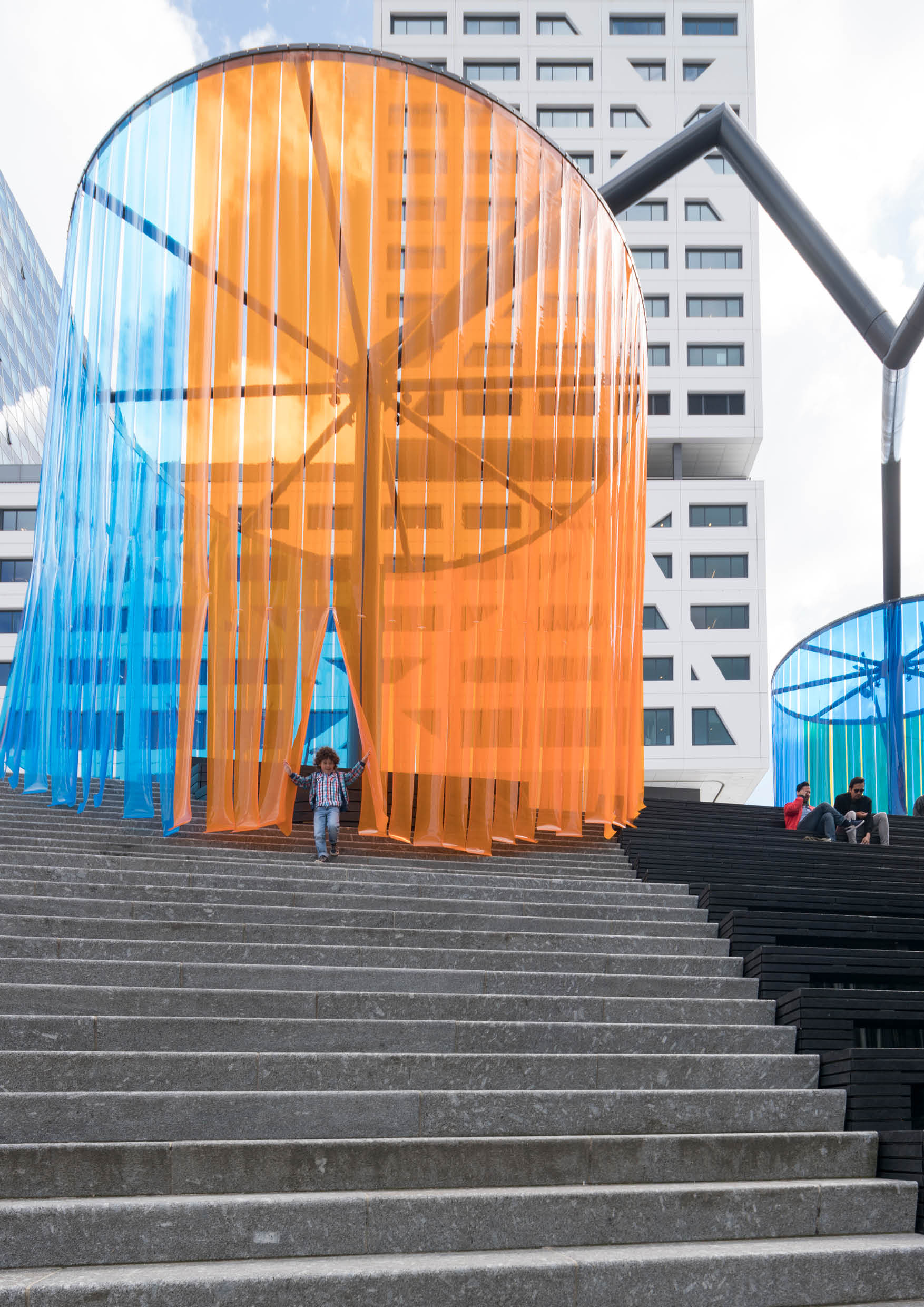 Aura Utrecht – commissioned by Public Works in collaboration with the City of Utrecht – is strategically situated at the top of the new entrance stairs leading to Utrecht Central Station, the busiest transport hub in The Netherlands. Acting as a beacon and welcoming those who pass by, the tripod sculpture supporting cylindrical shapes defined by colourful, see-through curtains, signals the brand new heart of the city after the recent extensive transformation of the station area. Each of its three spaces provide shelter and frame a moment in space and time with an aura of light, simultaneously creating a colourful oasis cut off from the pace of life, and a new energy field within the surrounding buzz like an urban stage or spotlight.

The characteristics of the PVC flaps – transparent, colourful, flexible and robust – form the basis of the artwork, functioning as a membrane, a skin, a filter and a source of colour and light. Their open and physically accessible nature, creates flexible forms, with soft borders and inviting spaces. They move in the wind, do not form an obstacle, but invite interaction, for example by walking through it frequently. As a result, the artwork and its location is emphatically activated by those who interact with it or spectate it from a distance. Here everyone is invited to become an actor and spectator of the public space, or to just take a pause and enjoy the play of movement and light while eating a sandwich or enjoying the view.

The client's wish was to imagine an intervention, which would put the daily activity within the square into the spotlight, as a kind of city stage. A place to meet, to hang out, and to rest, amidst the vibrant ‘Jaarsbeurs Square’ which links Utrecht’s new town hall, its major event space and central train station. Aura Utrecht functions as a playful invitation for people to interact with the surrounding public space, and to participate within it. A reformulation of the traditional role of the square, packed into three demarcated volumes that intrigue passers-by to reach out and touch it. During the day, the surroundings becomes tainted in an array of complementing colours, as a contemporary version of a stained-glass window; through which Aura Utrecht gives the impression of a present-day cathedral, bringing people together. When in the evening, the work is illuminated from above with a grand theatrical spot light, it quite literally becomes an urban theatre. The artwork in this sense, puts the social dynamics of the square into focus, as it creates the opportunity to stand out from the crowd and to step in the spotlight, or to withdraw and to reimagine the world and one’s own role within it.