LESS – 69 units of social housing, a gymnasium and a dance hall 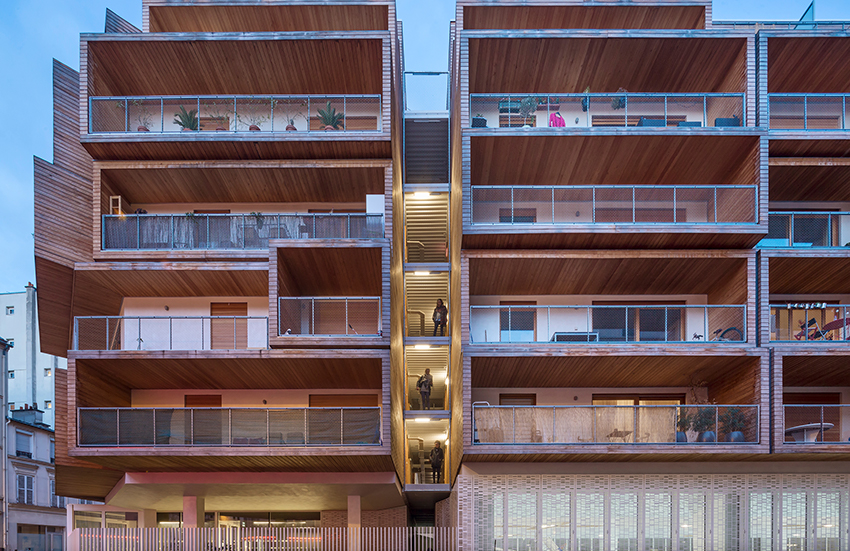 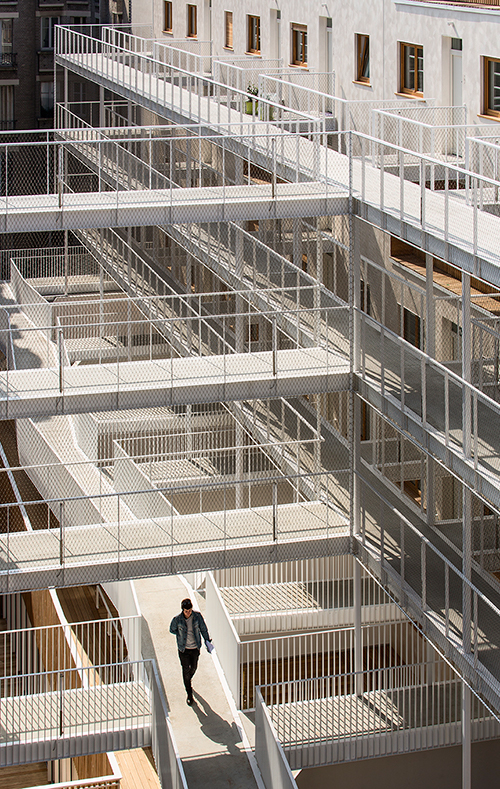 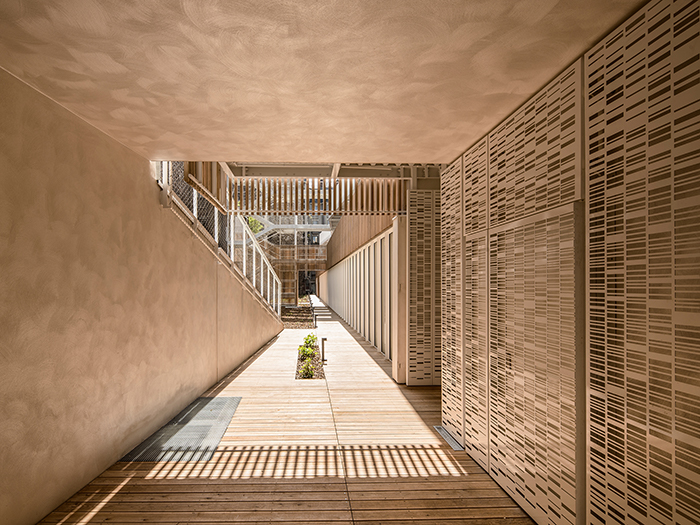 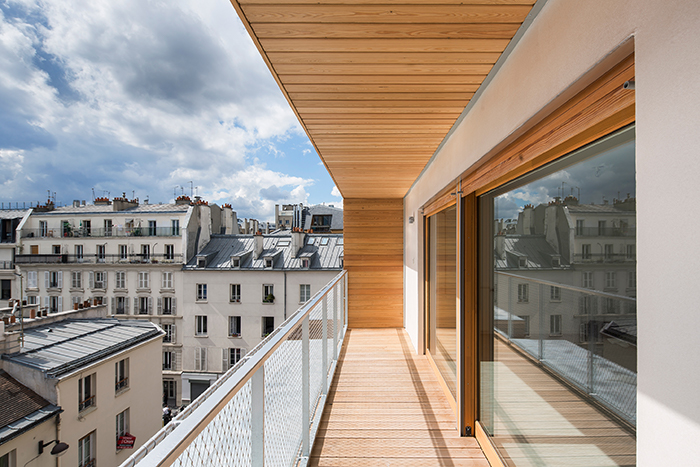 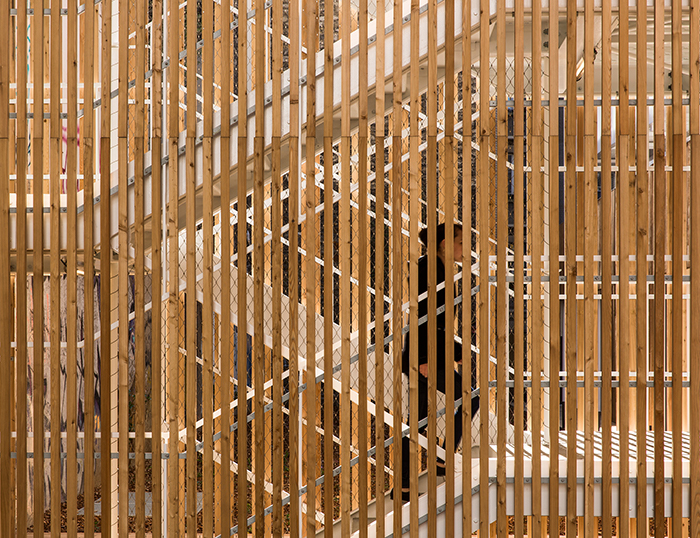 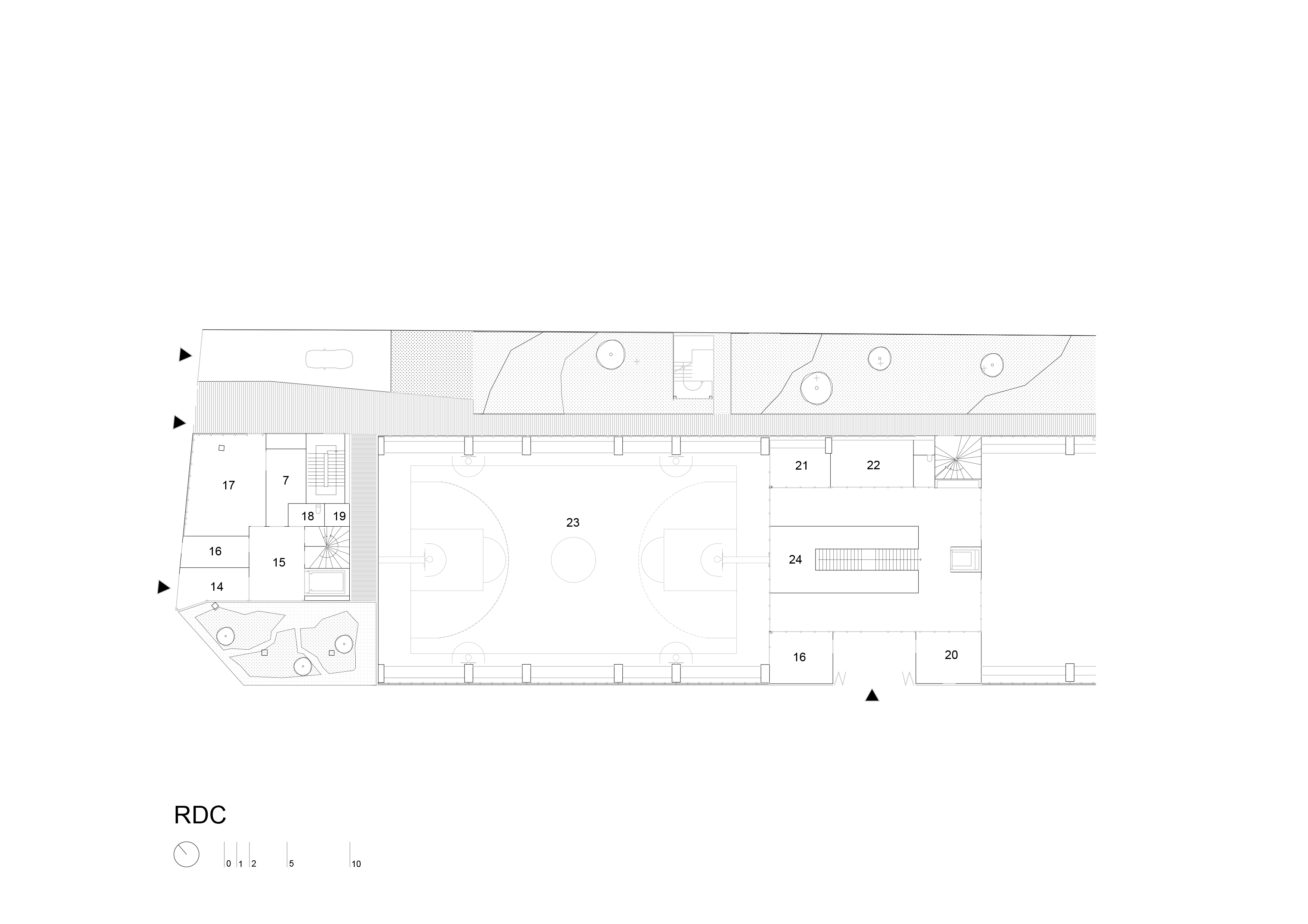 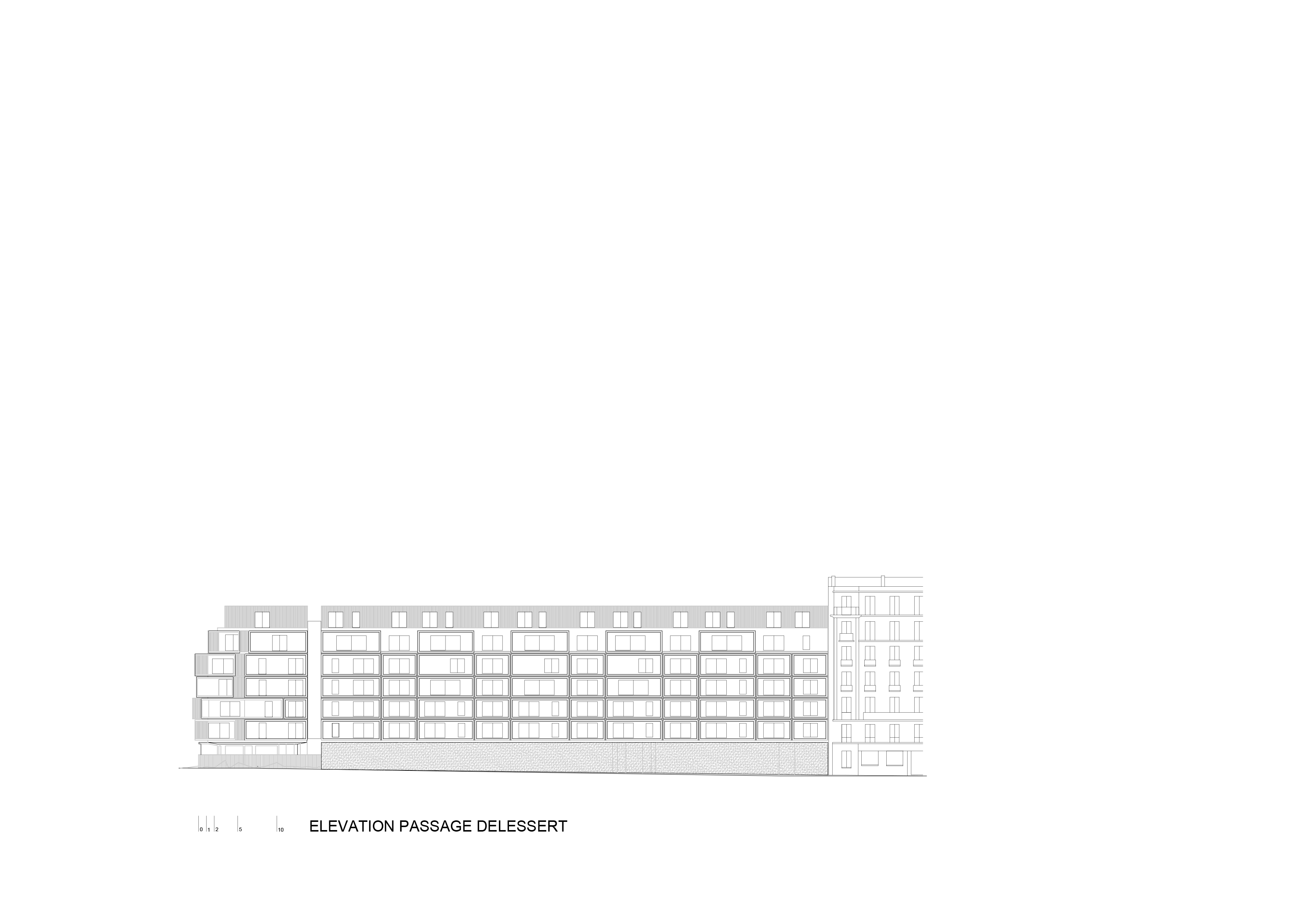 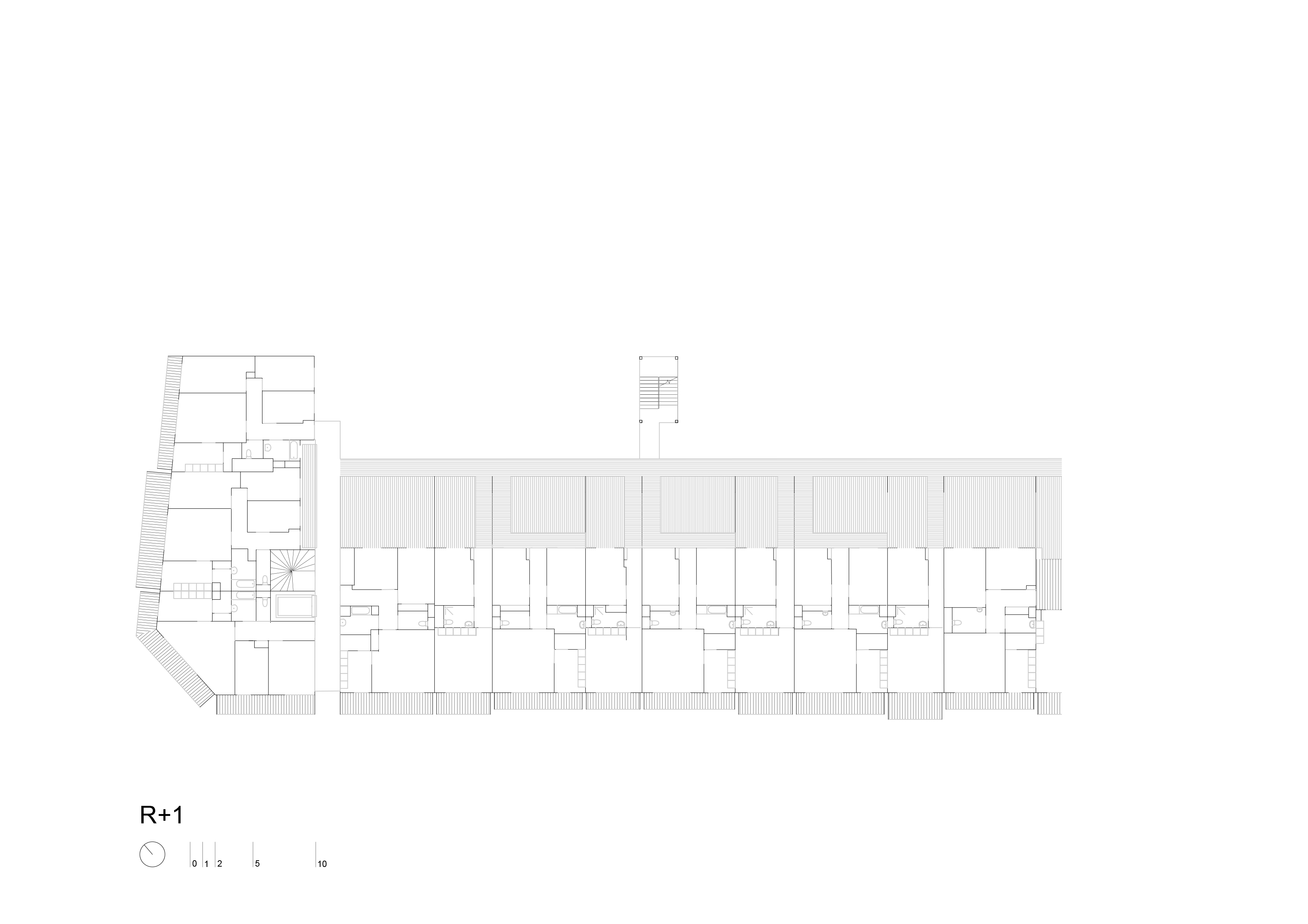 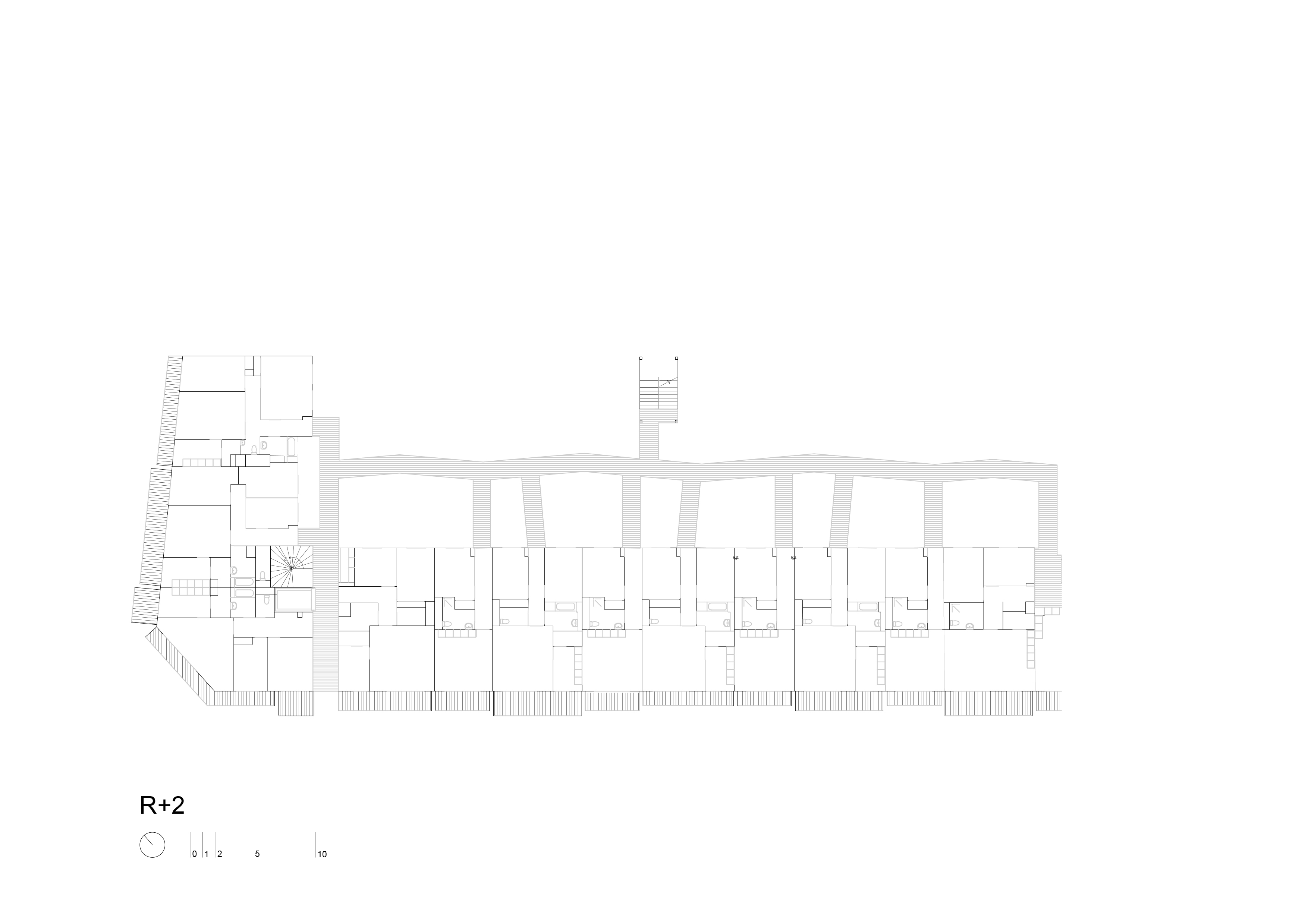 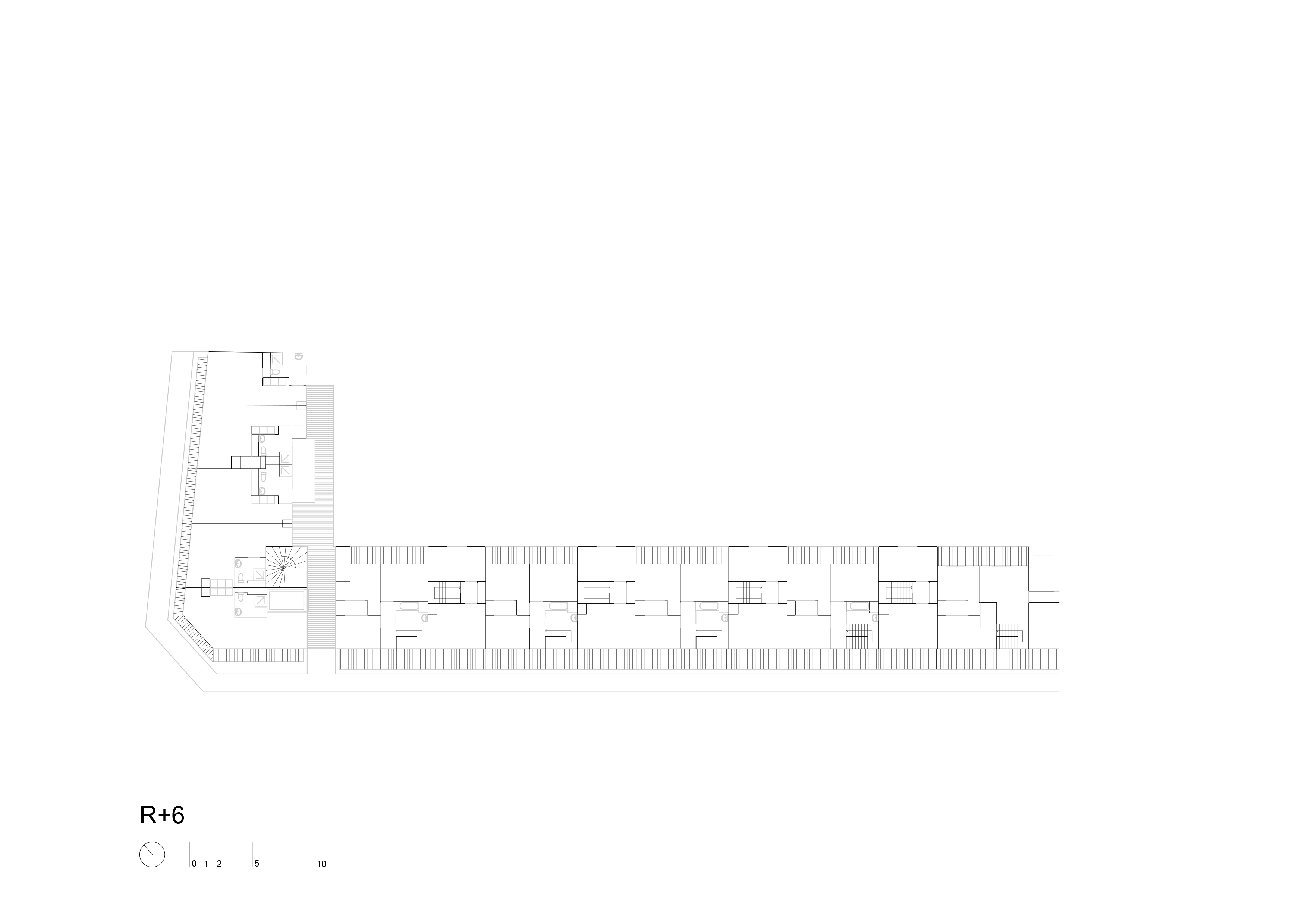 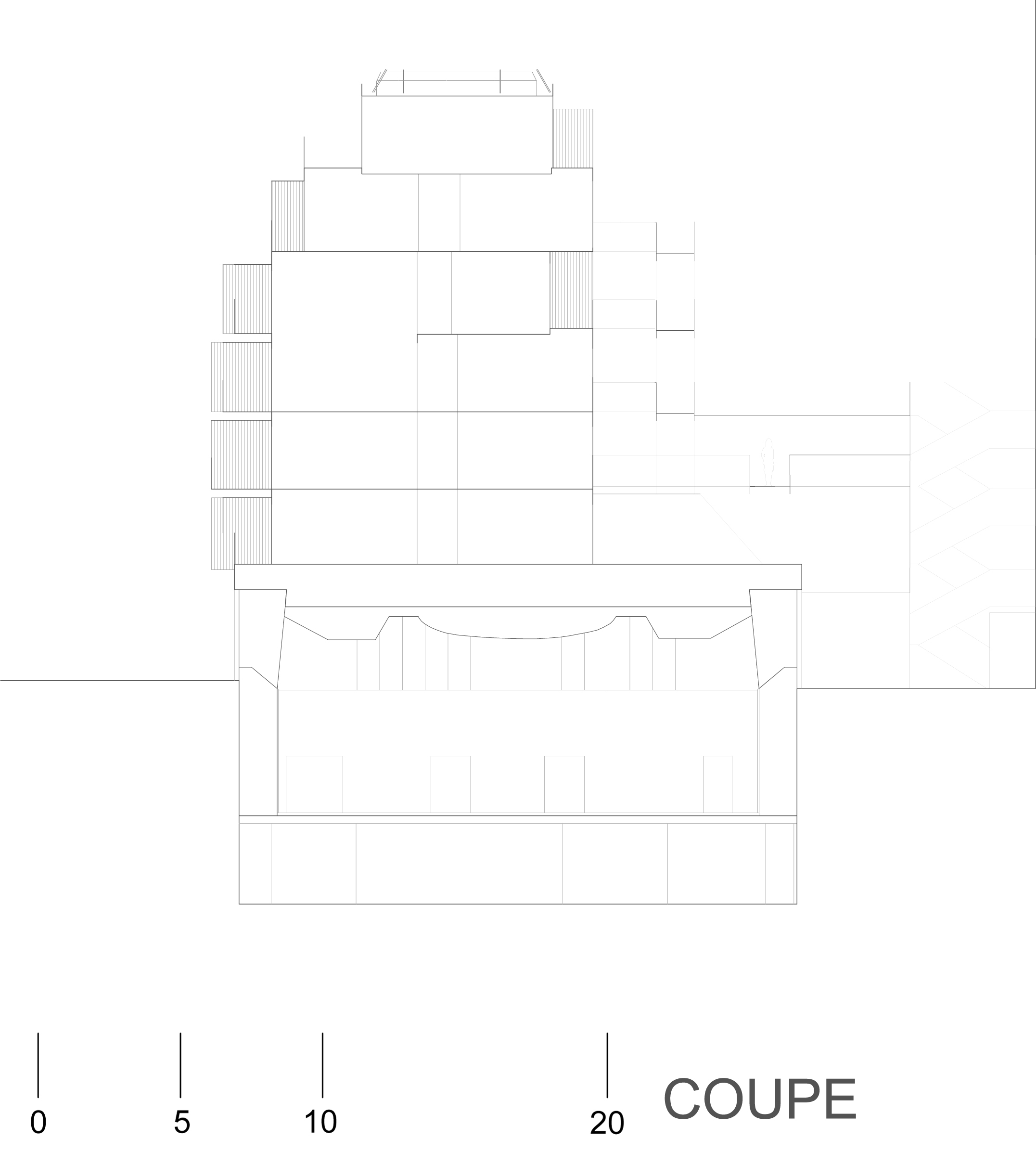 In 1891 the city of Paris registered this 100-meter passageway, open two years prior on the property of sieur Delessert, between the Rue Pierre Dupont and the Quai de Valmy. On the eastern end lies the Canal Saint-Martin, today an area for strolling and recreation, but in that period a thoroughfare leading to the Bassin de la Villette, the fourth largest industrial port after Marseille, Le Havre and Bordeaux. The activity of the port was intense and traces of it persist in some of the enormous industrial buildings, i.e., the Cité Clémentel, the former power station for the Compagnie d’Air Comprimé, among other more discreet buildings facing the street. The intervention embraces the context as a blend of populations, memories, and activities along with a wide variety of building types in a single area. The operation includes a gymnasium, sold off plan to the city of Paris, where 69 units of social housing are located. This intervention seeks first to achieve a hybridization of the grand industrial scale found in the area with the private scale of the housing unit. The building stands along the Delessert passageway, forming the angle of the two streets before turning back toward the rue Pierre Dupont with the use of a loggia motif on five levels built in larch wood, without there being any intention of erasing or diminishing its presence or hiding the major changes brought on by its arrival on this empty lot of the neighborhood, a bucolic vacant space long occupied by a prefabricated structure and an inflatable structure housing abandoned tennis courts.
It has been difficult for the neighborhood to bid farewell to this last little piece of the country in Paris, and the densification of an open space explains the group lawsuit brought against the project by 180 neighbors recorded during the waiting period for the building permit. This densification nevertheless includes a diversification of the program that benefits the entire neighborhood, and an obligation of a mixed-use facility registered with the Local Planning Program (PLU). Located along the Passage Delessert in a volume partially underground, the facility generates constraints that have given the project its specific nature. Most of the housing units stand above the structure of the gymnasium, which is a series of arcades spanning a distance of more than 20 meters, whose beams form the steel plates for the first level of housing, and determine the framework for the upper-level load bearing walls. A vertical fracture separates the first gymnasium/housing complex from a smaller parcel, which is comprised of housing units in the upper stories as well as a series of technical areas on the ground floor: guardian reception, diverse storage areas, access to parking garage, etc.

Access to each housing unit is an individual promenade that starts in the main hall, open to the semi-private garden, according to a layout inspired by the ones often found in Parisian apartment buildings dating from the 1960s and 70s―the golden age for such constructions. Marble laid out in a herringbone pattern welcomes visitors and occupants, in an expression of the desire to offer a level of quality in the social housing sector usually reserved for upscale housing programs. The utilization of raw materials in most of the circulations made it possible to make occasional use of symbolically luxurious materials, just as durable as stone but without the premium to pay. Once beyond the entry hall, occupants access their apartments by taking a long passageway placed five meters out from the back façades. The final threshold, a short individual footbridge will provide access to a housing unit, always with a shotgun floorplan, and a landscaped terrace placed over the base formed by the gymnasium, for all the apartments on the building’s second level. The superstructure of metal passageways is a landscape in itself in the heart of the city block, a floating balcony overlooking a garden designed by Atelier Roberta. Each housing unit is appointed with an individual loggia, whose variable depth is calculated to allow occupants their legitimate degree of privacy. On the ground floor, metal mesh filters the light to avoid disturbing the practice of sports, reduced to the exposure of sports practitioners and dancers to the view of passersby.
The many loggias, passageways, footbridges, stairs, and garden buffer areas take privacy into account yet increase the occasions for transparency and visual porosity throughout, taking the risk of going against a contemporary desire for new buildings to totally isolate occupants from the each other’s view. Access to the half-buried rooms is enhanced and facilitated by a central stairway fully transparent in all four cardinal directions. The people living in the terrace houses become a kind of show, unfolding as the occupant strolls along his path, literally thrown into the multiple worlds of the rear courtyards and smaller courtyards filled with the rustling of diverse destinies.
Drawing inspiration more from the picturesque domestic passageways and footbridges of Jacques Tati’s film “Mon Oncle”, and from ambiances like the one in Alfred Hitchcock’s “Rear Window”, the building is intended as much as a machine for living as a machine for viewing. Street, city, passersby, the heart of the city block, neighbors, everything is alternately veiled and unveiled as one moves about the site, and with these fleeting visions come increased opportunities for encounters, enhancing the diversity and energy that generate the best aspects of living in a metropolis.