A collective space in Madrid Bank of Spain 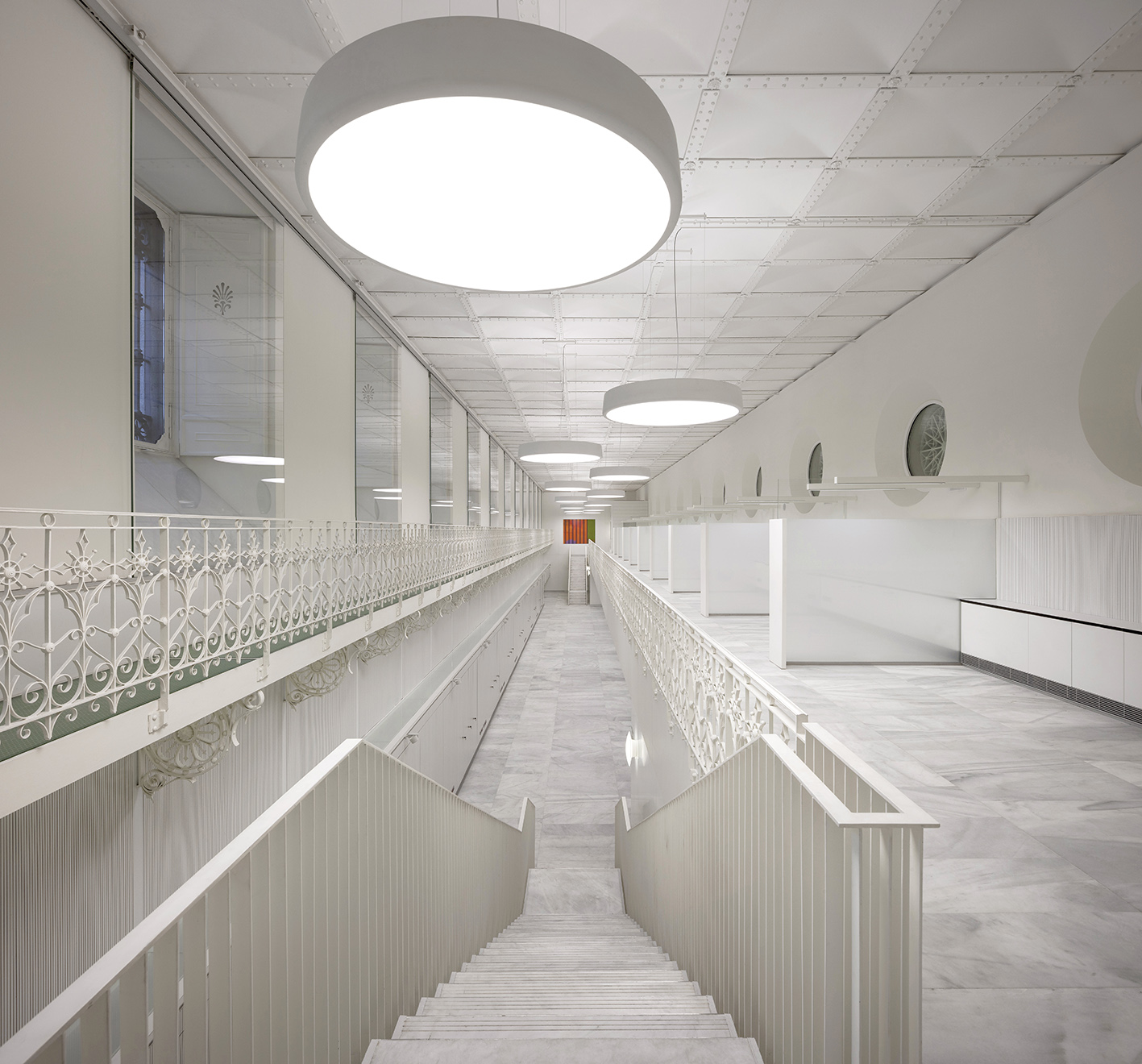 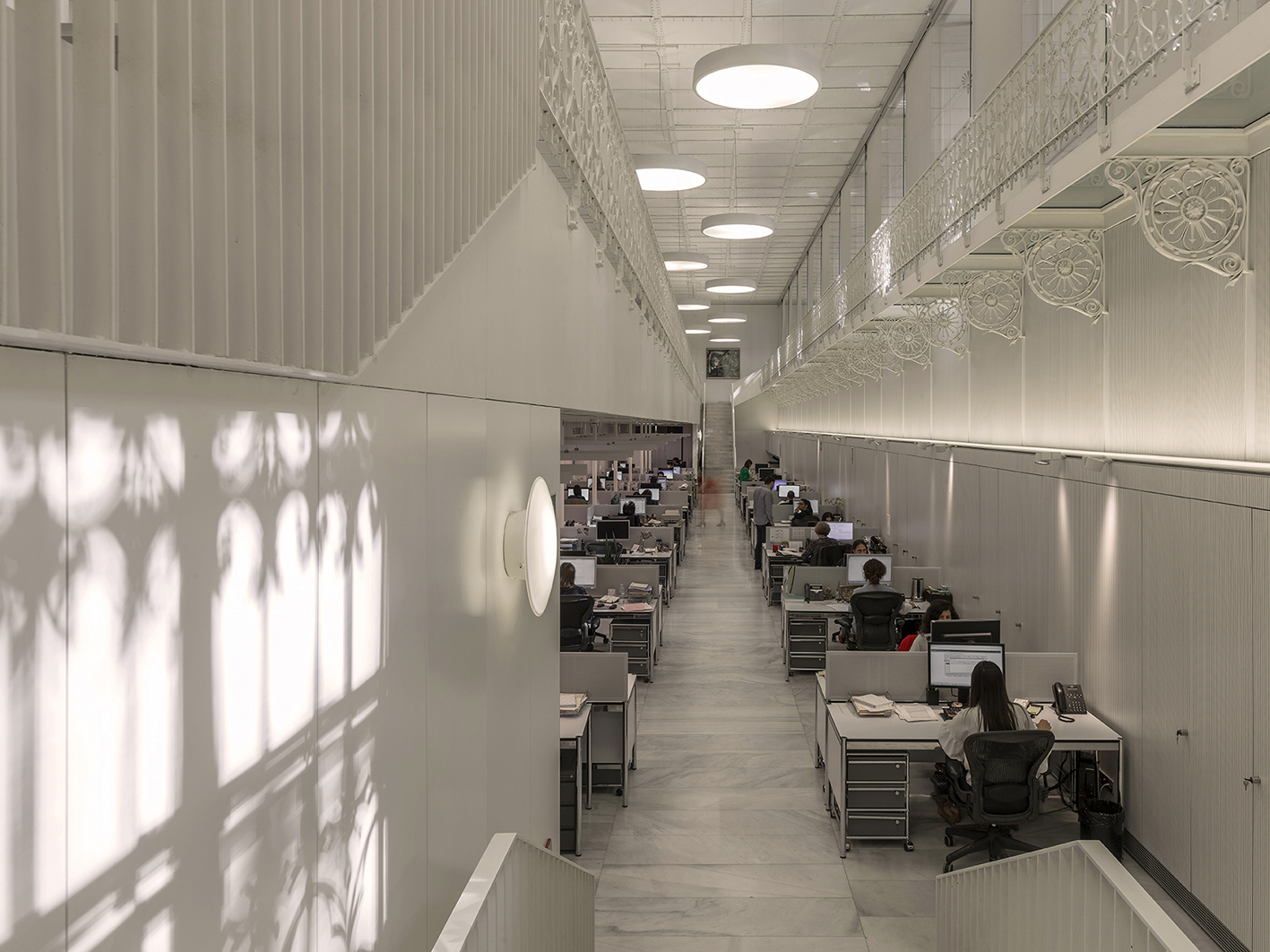 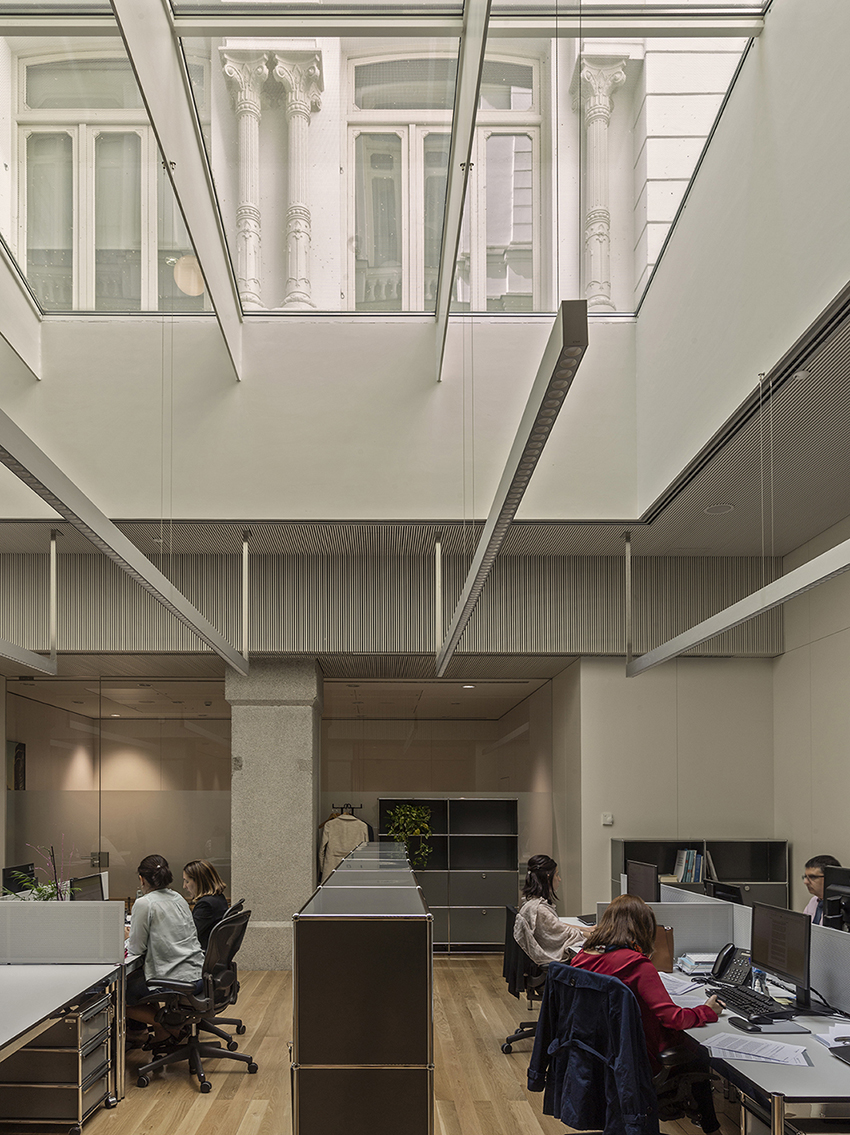 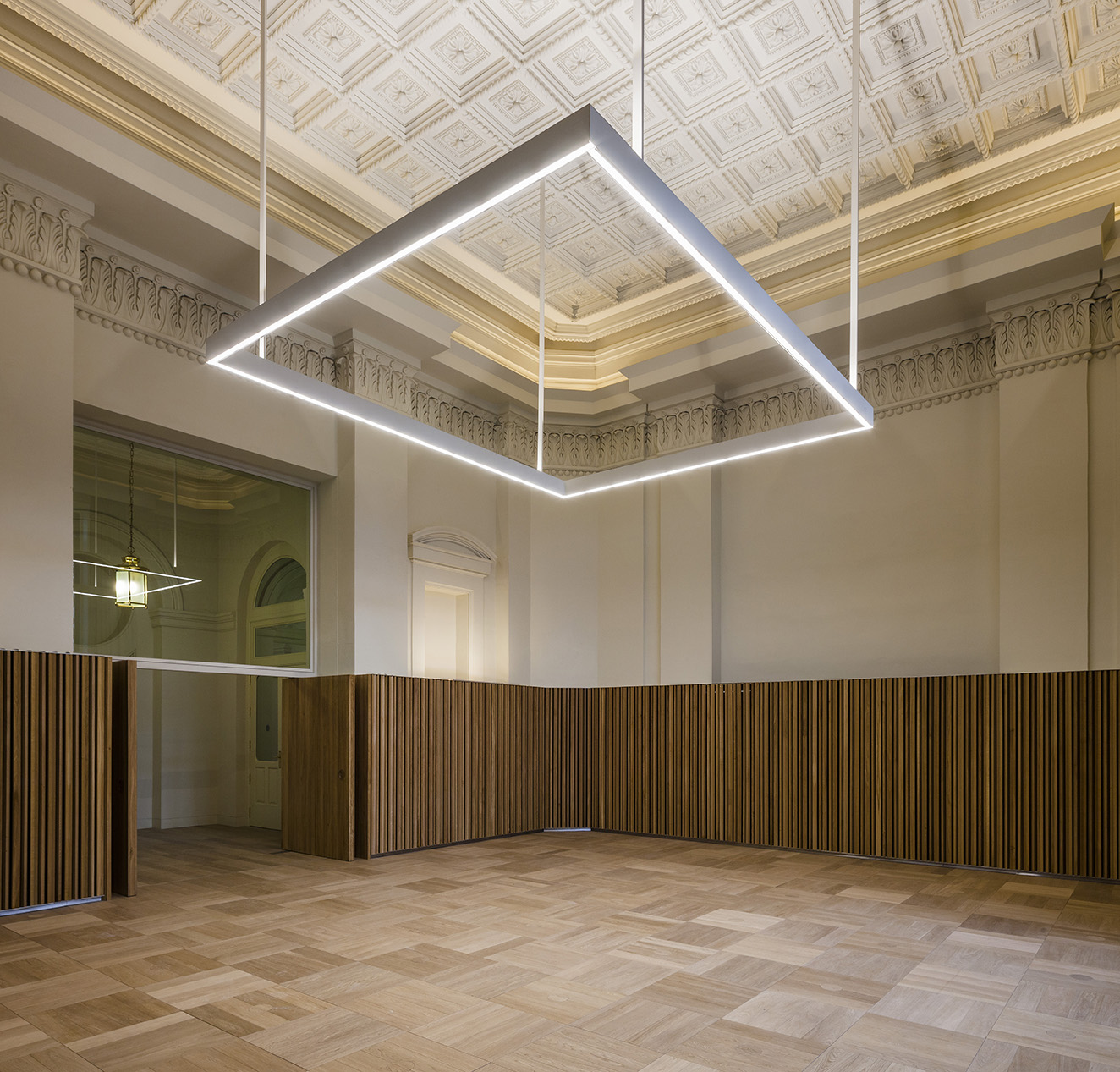 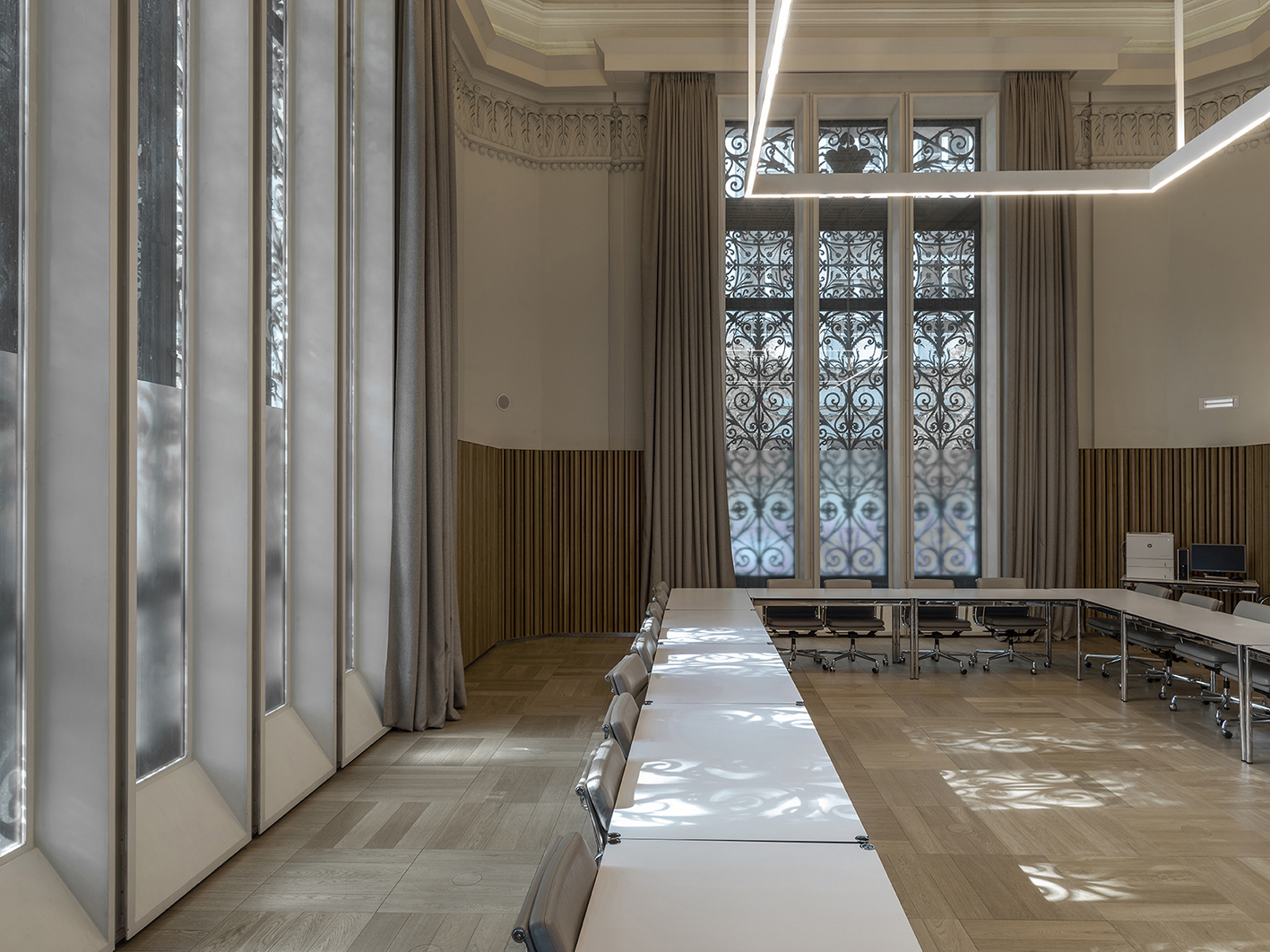 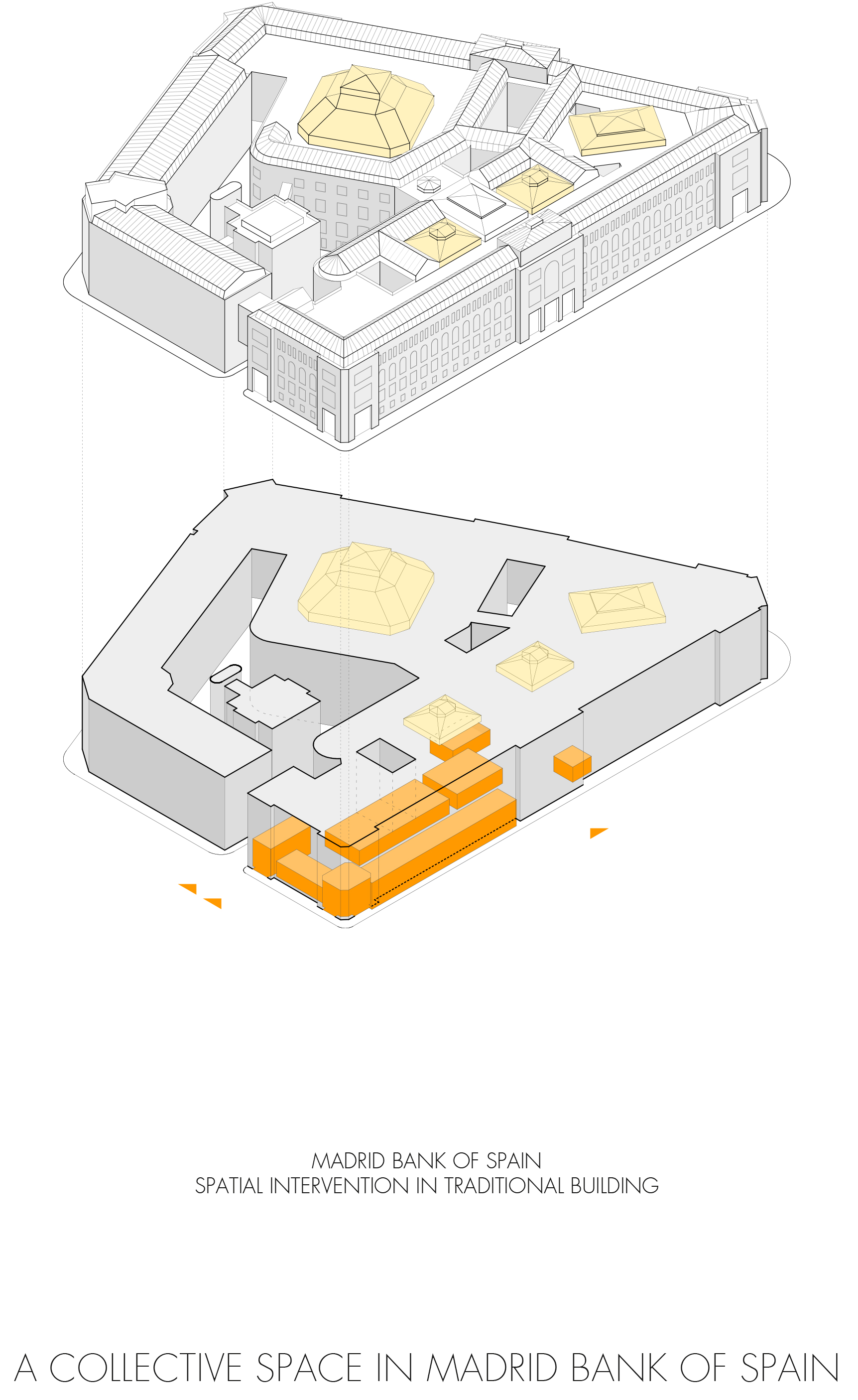 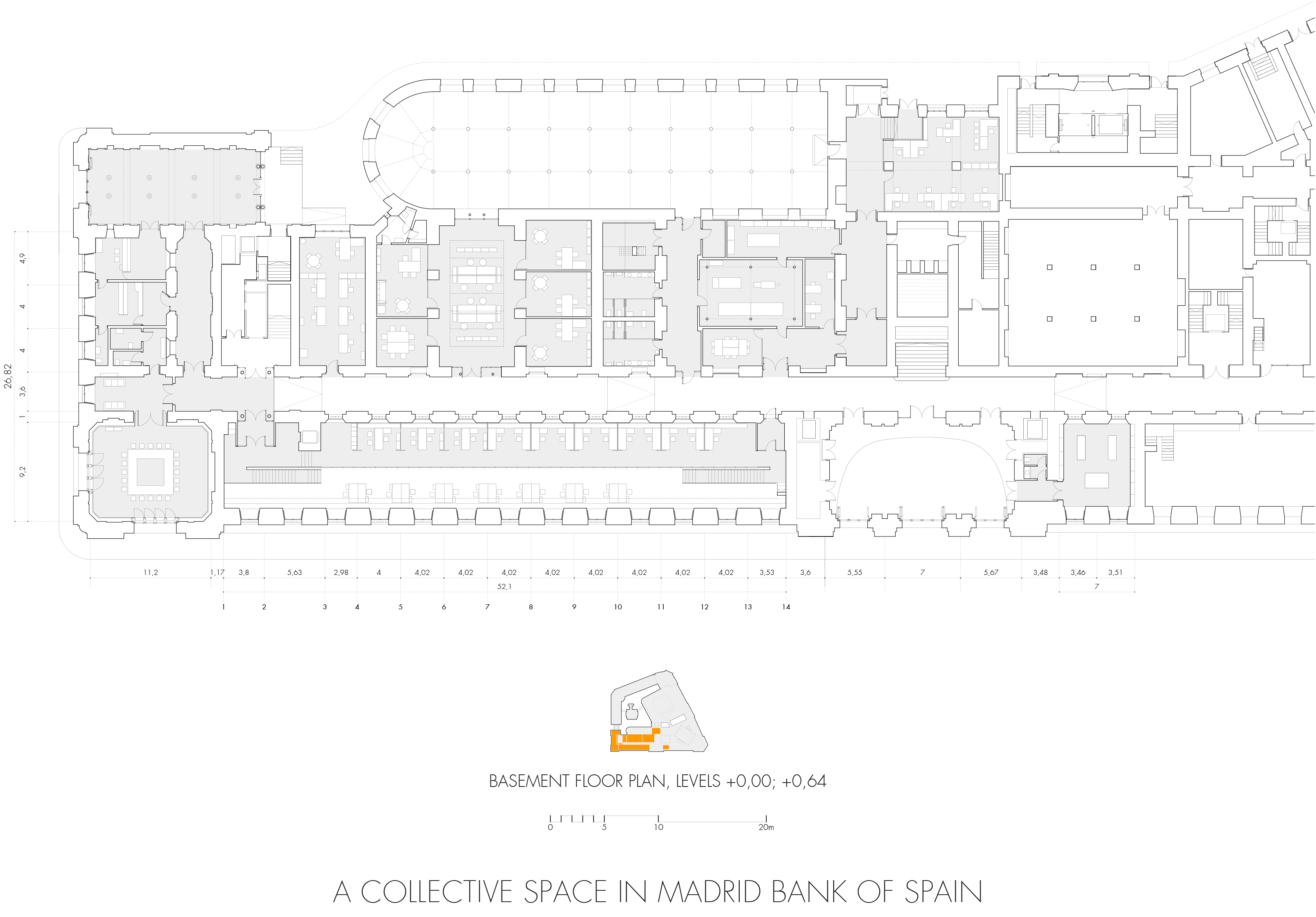 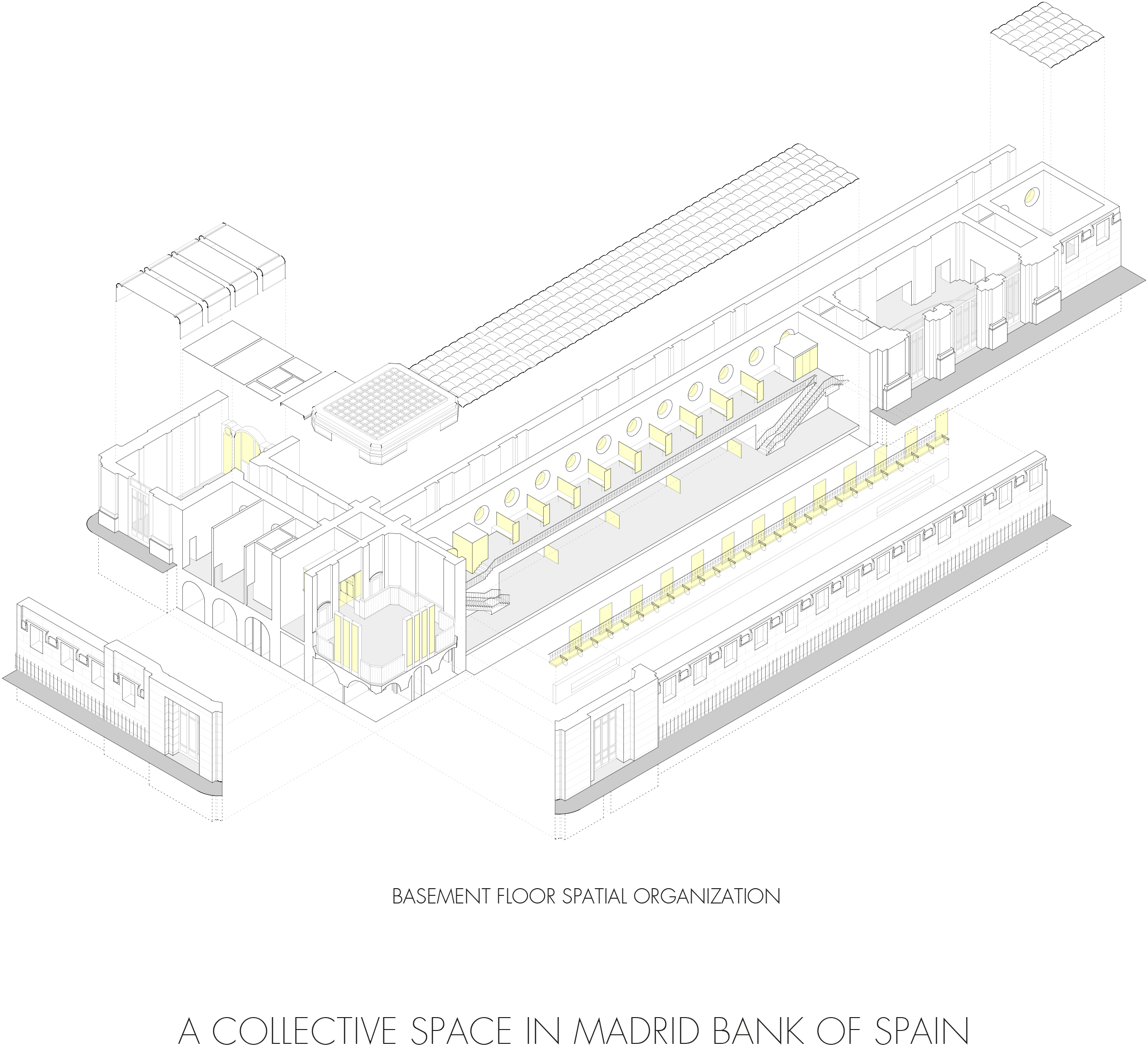 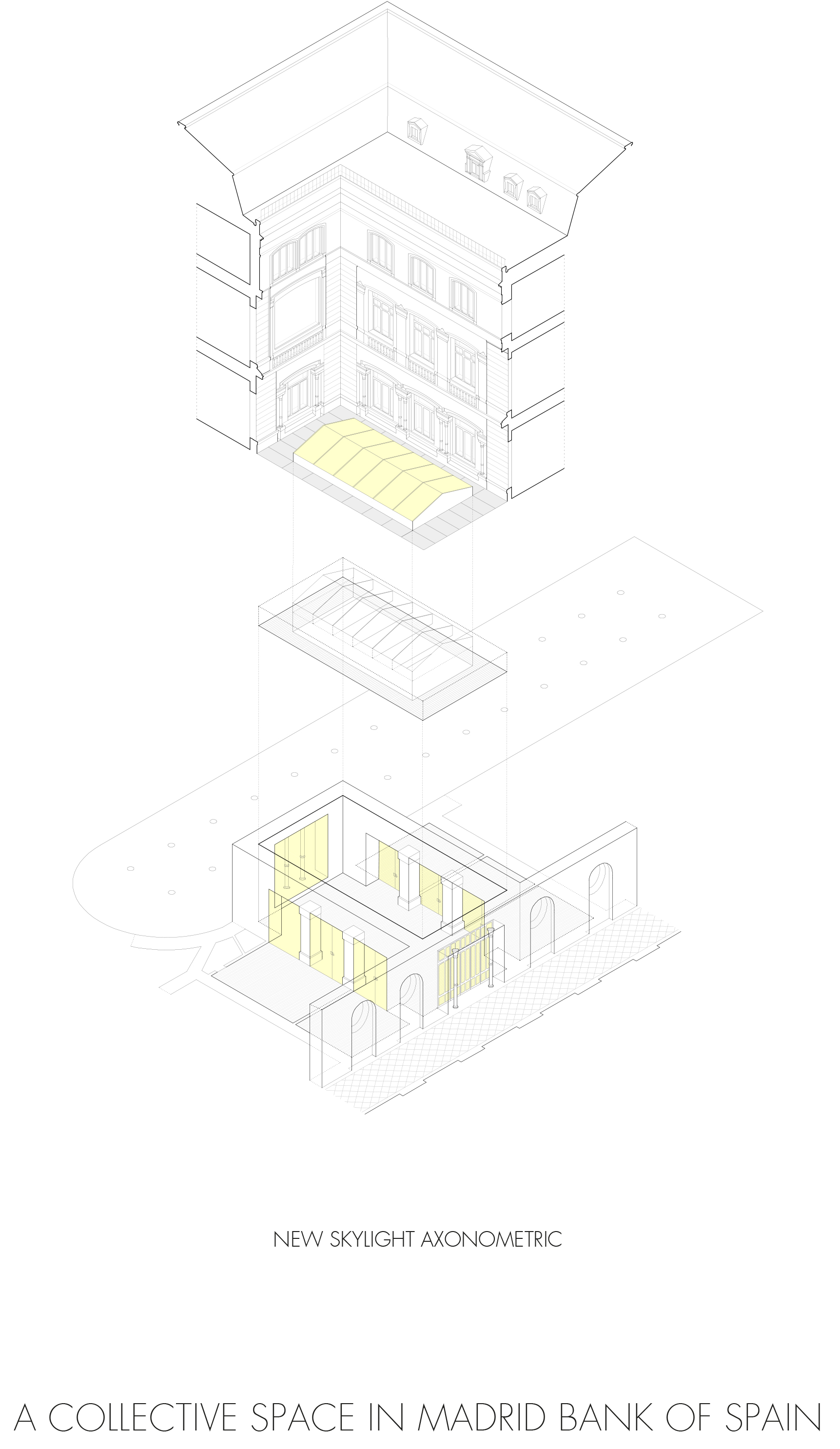 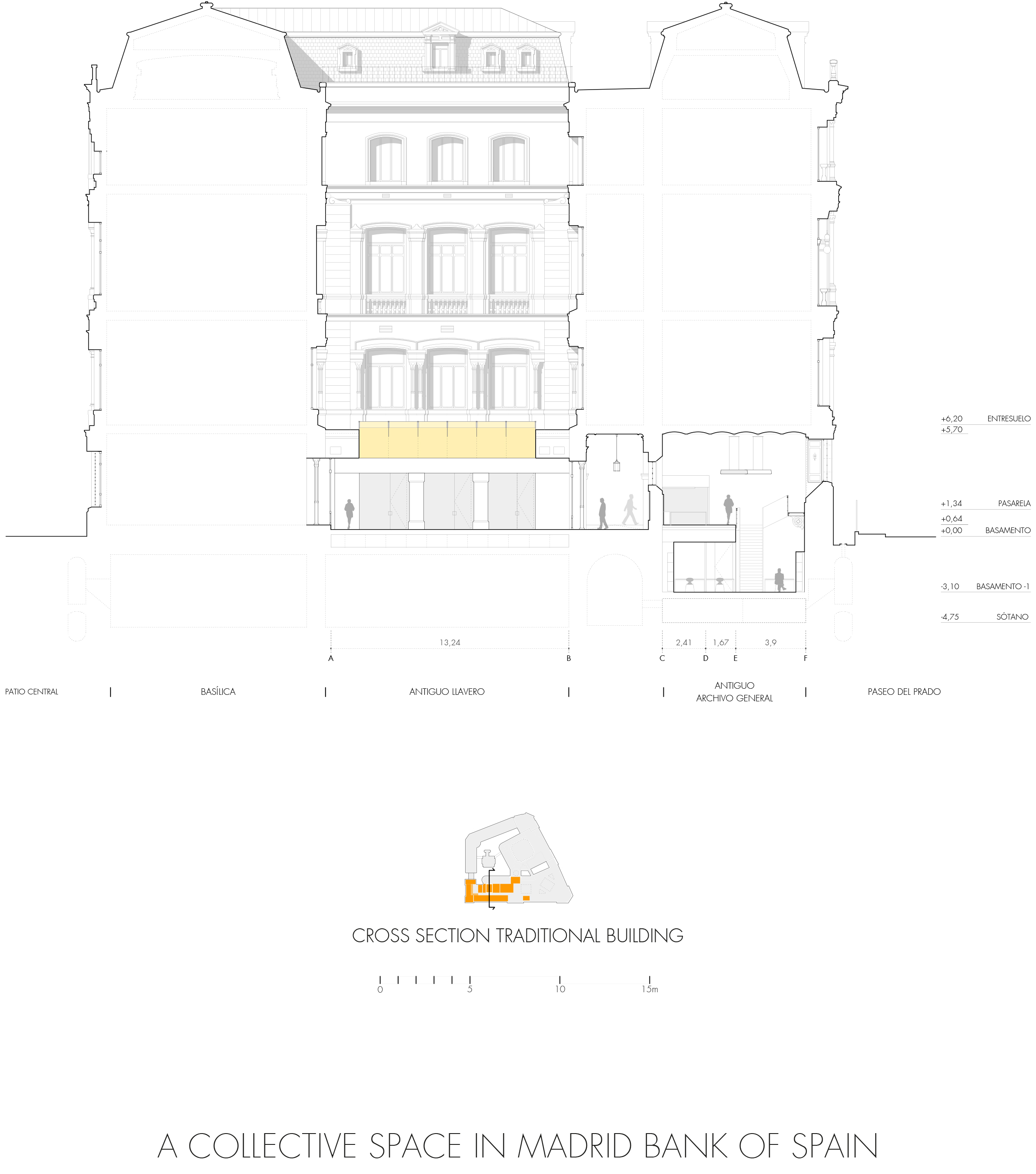 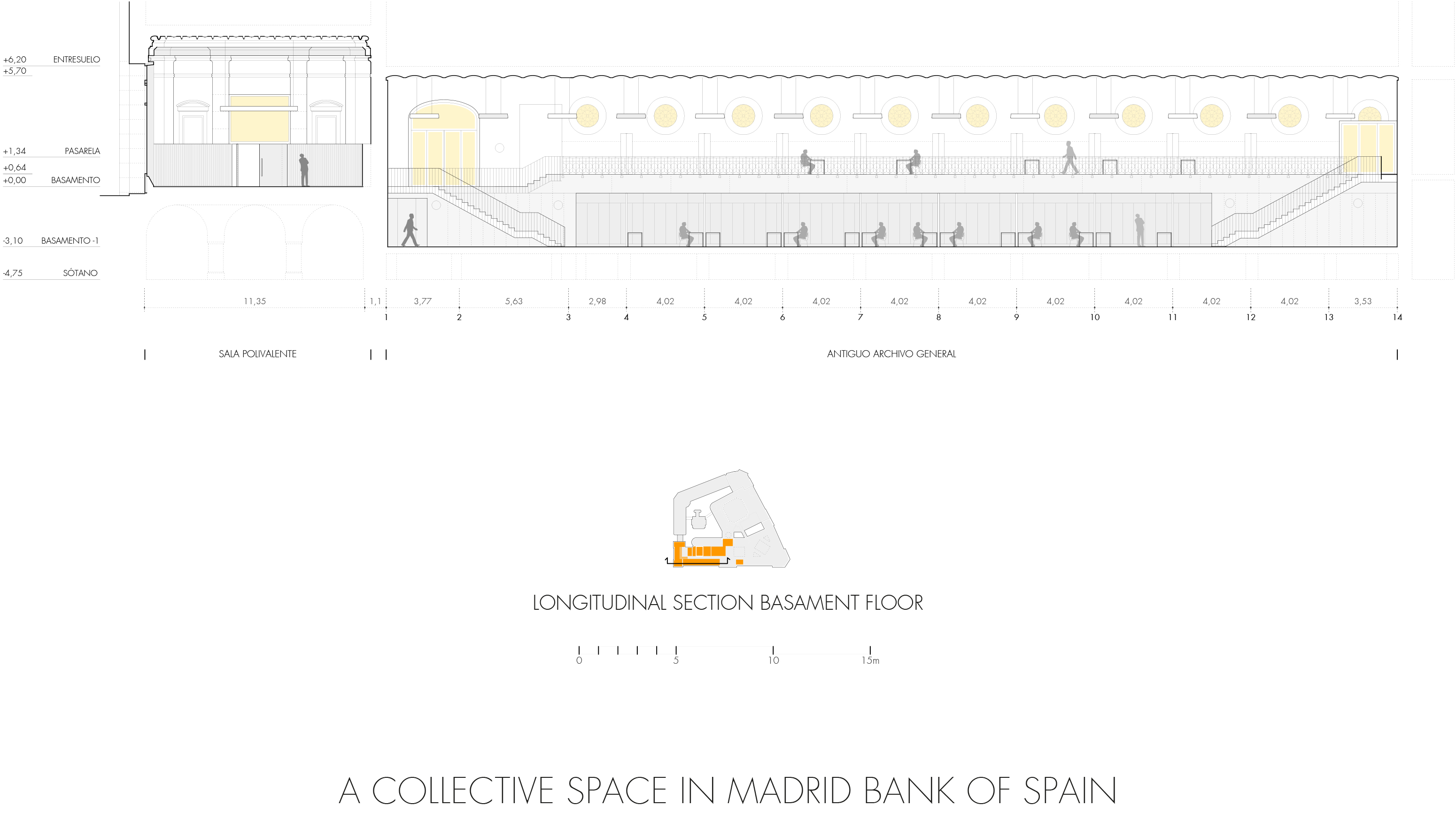 The Bank of Spain in Madrid Plaza Cibeles, appears to be an historic building invariable in time, nevertheless it is continuously renewed by various interventions that sometime are strict works of restoration but also can transform spaces and uses to emphasize the value of the protected 1884 building. The intervention in the level next to Paseo del Prado, has recovered the former 52x10x10 meters space and the original ceilings that were mostly hidden behind intermediate levels, drywalls and plaster ceilings. Apart from introducing a new architectural language, the constructive and ornamental specifics have been carefully restored. The main nave and two lobbies have been recovered for a multipurpose hall for the new public access to the building.

In the nave, a new light balcony that reuses the ancient iron art work for the railings, runs parallel to the historical windows that include sliding crystals to attenuate the traffic noise introducing reflections inside. At the opposite façade, original circular windows are reopened permitting a visual connection with the gallery. The original vaulted metal ceiling is recovered and large circular lamps are suspended over the white marble pavement. Also, white lacquered absorption panels are set in dialogue with the original iron art work. In the multipurpose room, the 11x9x9 meters space and original ceiling and decoration were also recovered. An oak wood frieze serves acoustic requirements and a rectangular lamp is suspended in the centre of the room. The restored iron original doors permit the view of the Prado life.

Paredes Pedrosa have intervened gradually in several areas of the building since 1986 (Cibeles lobby). Later interventions in 2009 (mansards), in 2011 (new vertical connection) and in 2013 (Patio de Operaciones), have revealed hidden spaces and qualities that have been adapted to new uses. The intervention in the basement floor next to Paseo del Prado in 2017, has given space to a whole administrational department of the Bank in an area that was partly used for archives and storage. From the lecture of the historic original plans these spaces, unrecognizable in last years, have been set in value and adapted to the current and changing needs of this institution and now they are working spaces that enhance the pleasure of architecture.

On the one hand, the Bank of Spain historical building in Madrid is an emblematic institution but also it is a lively office building in which over 1800 people work. 120 people work now in the new restored rooms. Before this intervention, this administrational department was using conventional 3 meters high offices. Besides, these now beautiful nave and rooms were divided and were used as storage areas. So, not only the recovering of this architecture is valuable from the material point of view, but also the fact of adapting these spaces to the actual needs of the Bank. Now they give natural light and comfort to the day to day work and moreover, they permit the pleasure of enjoying quality architecture that makes people's lives better.