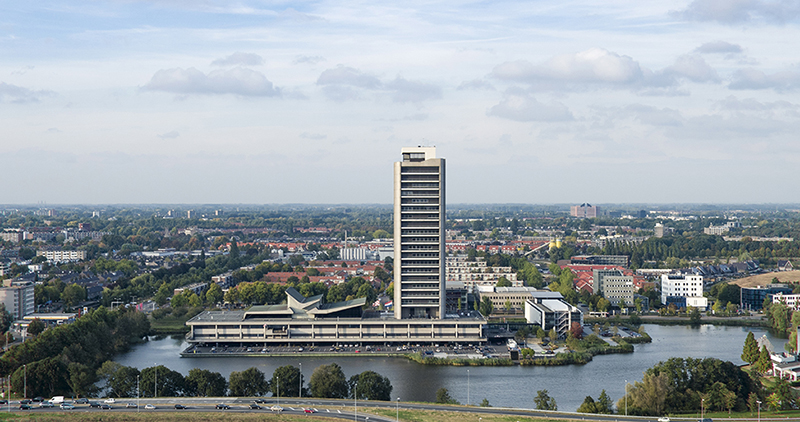 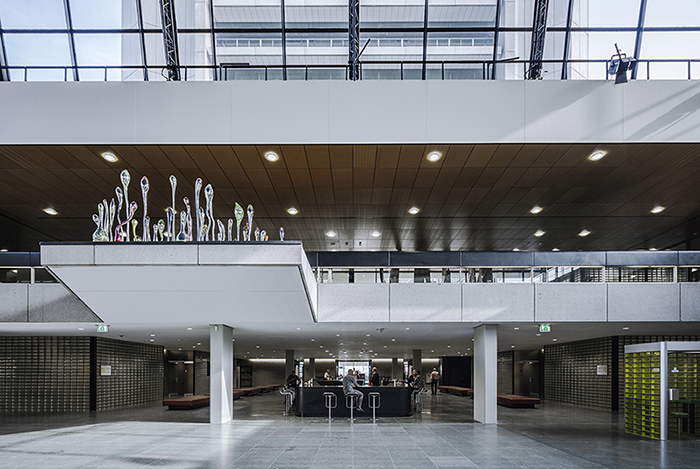 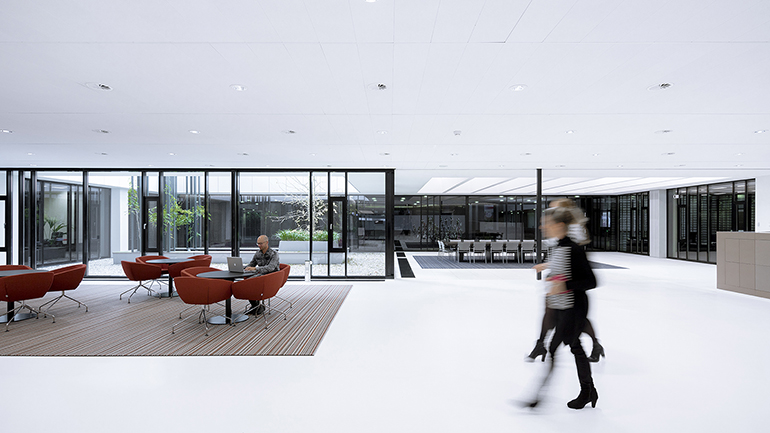 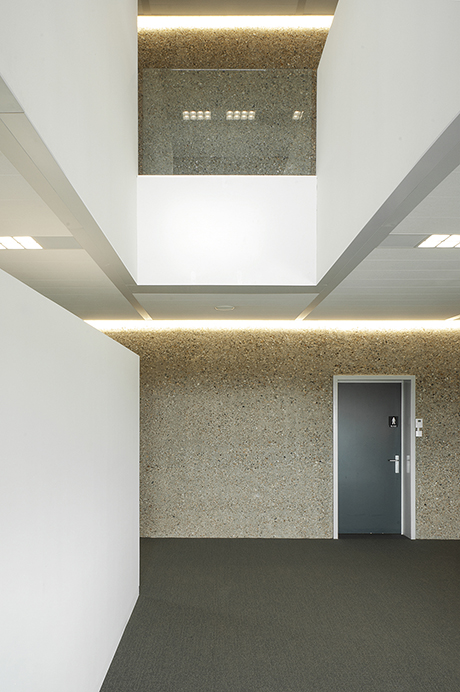 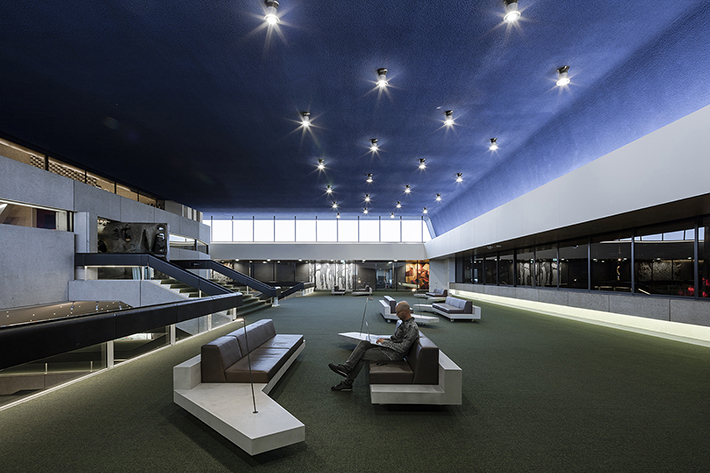 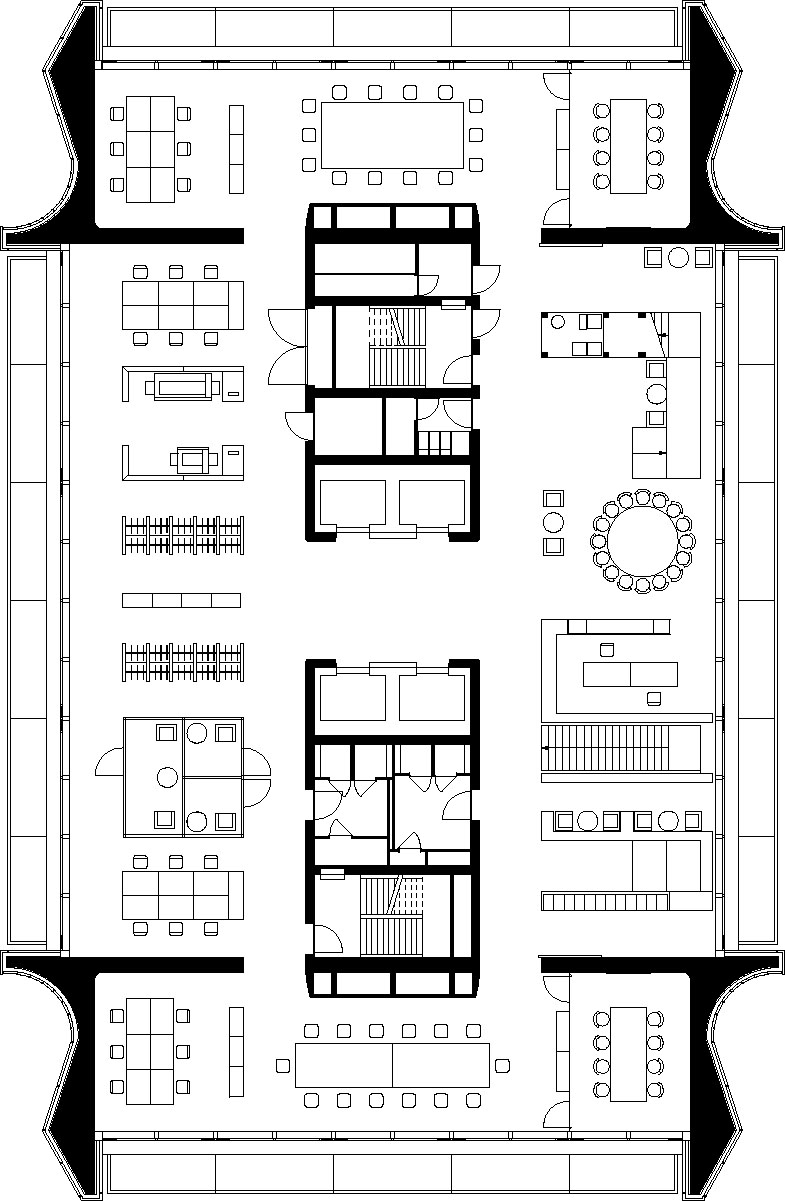 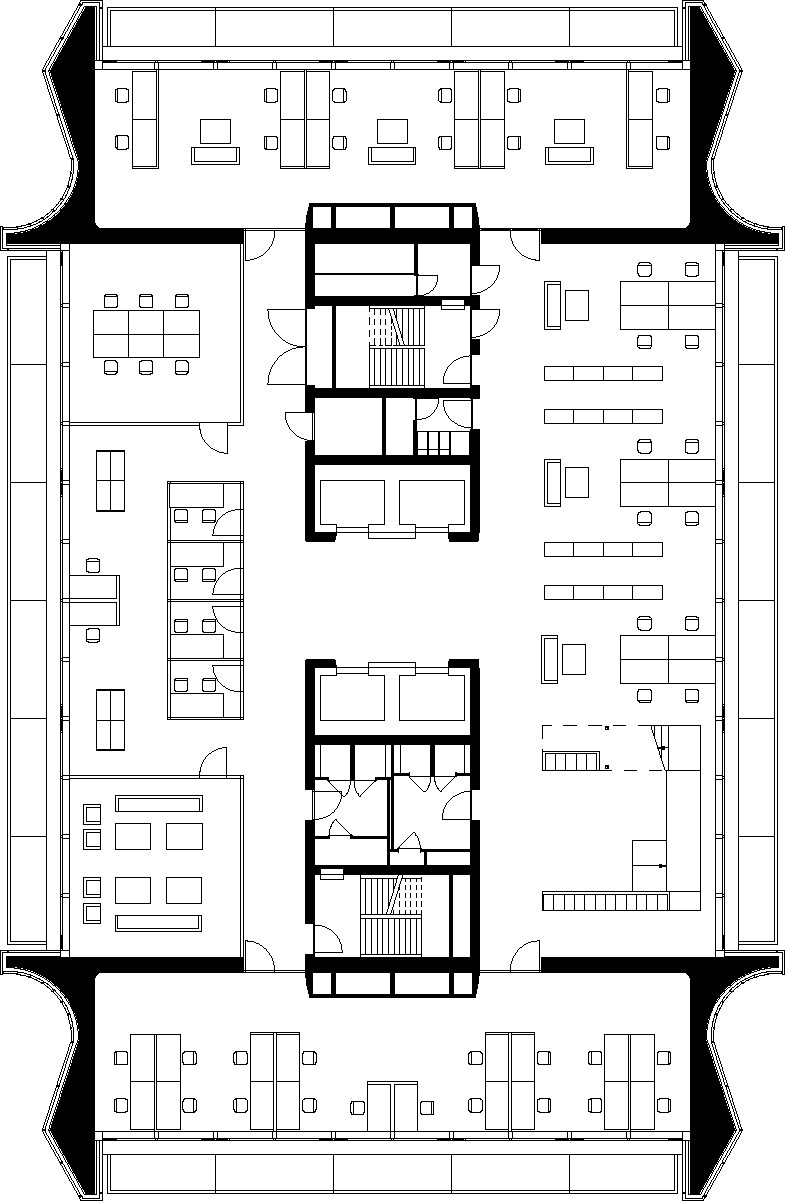 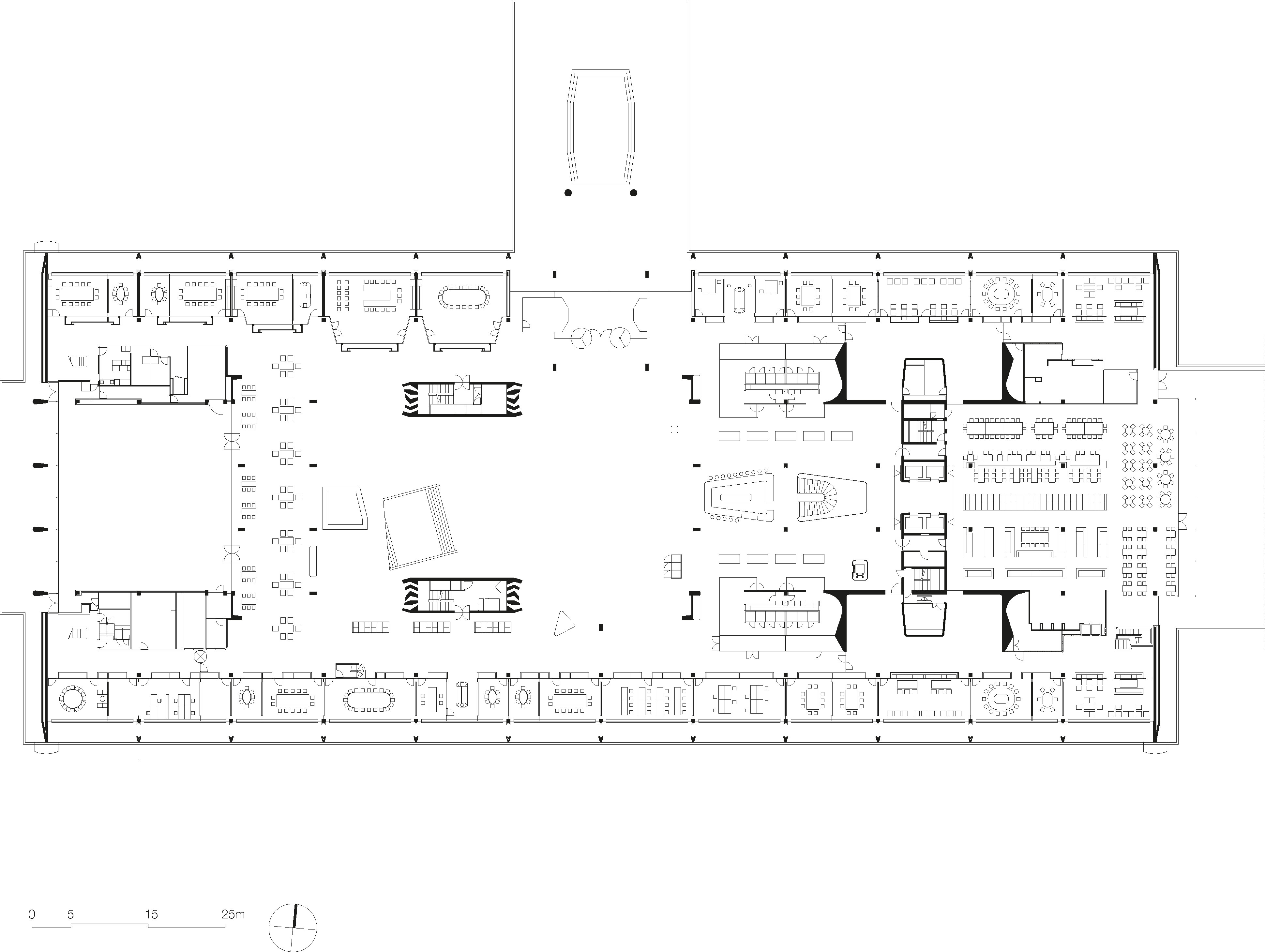 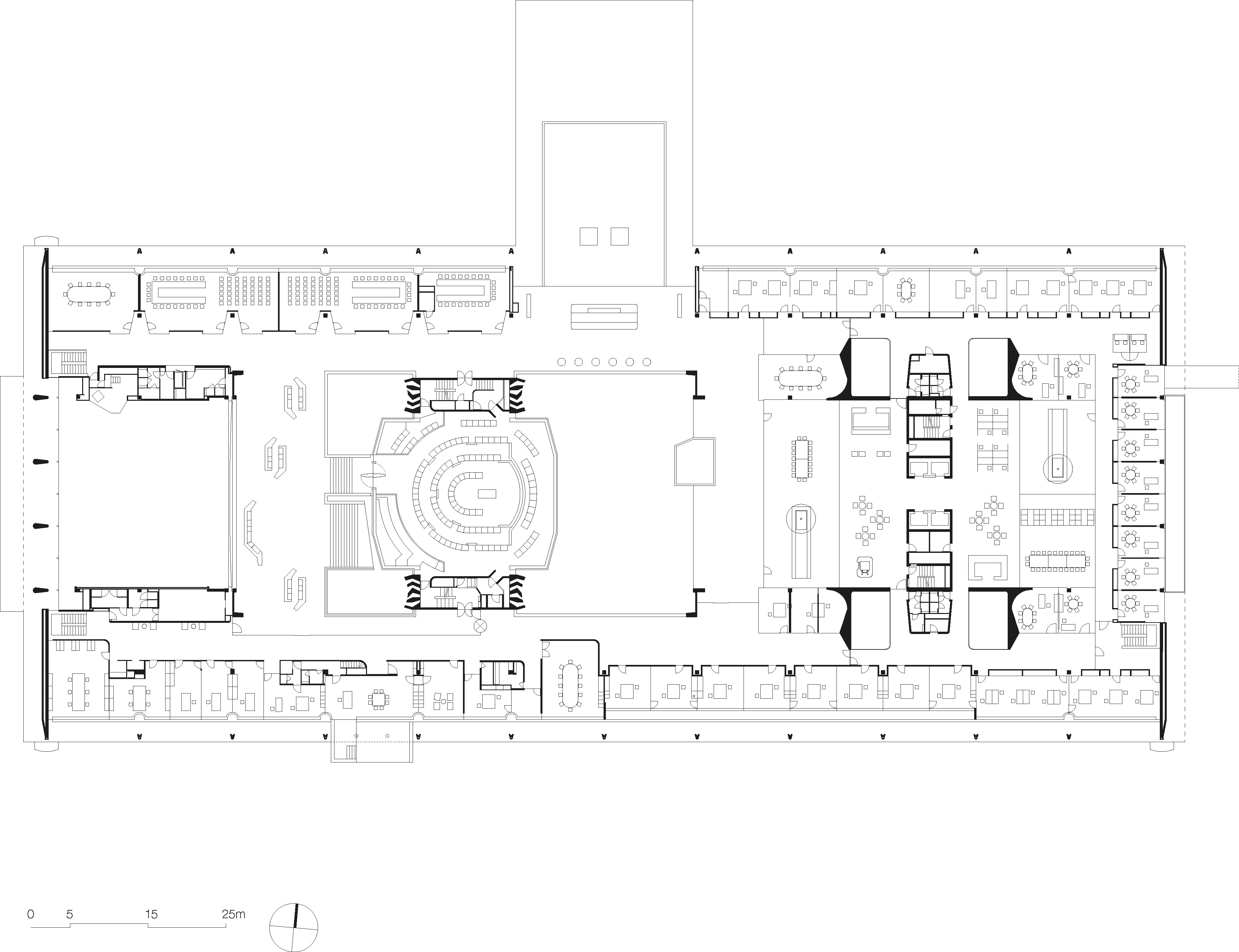 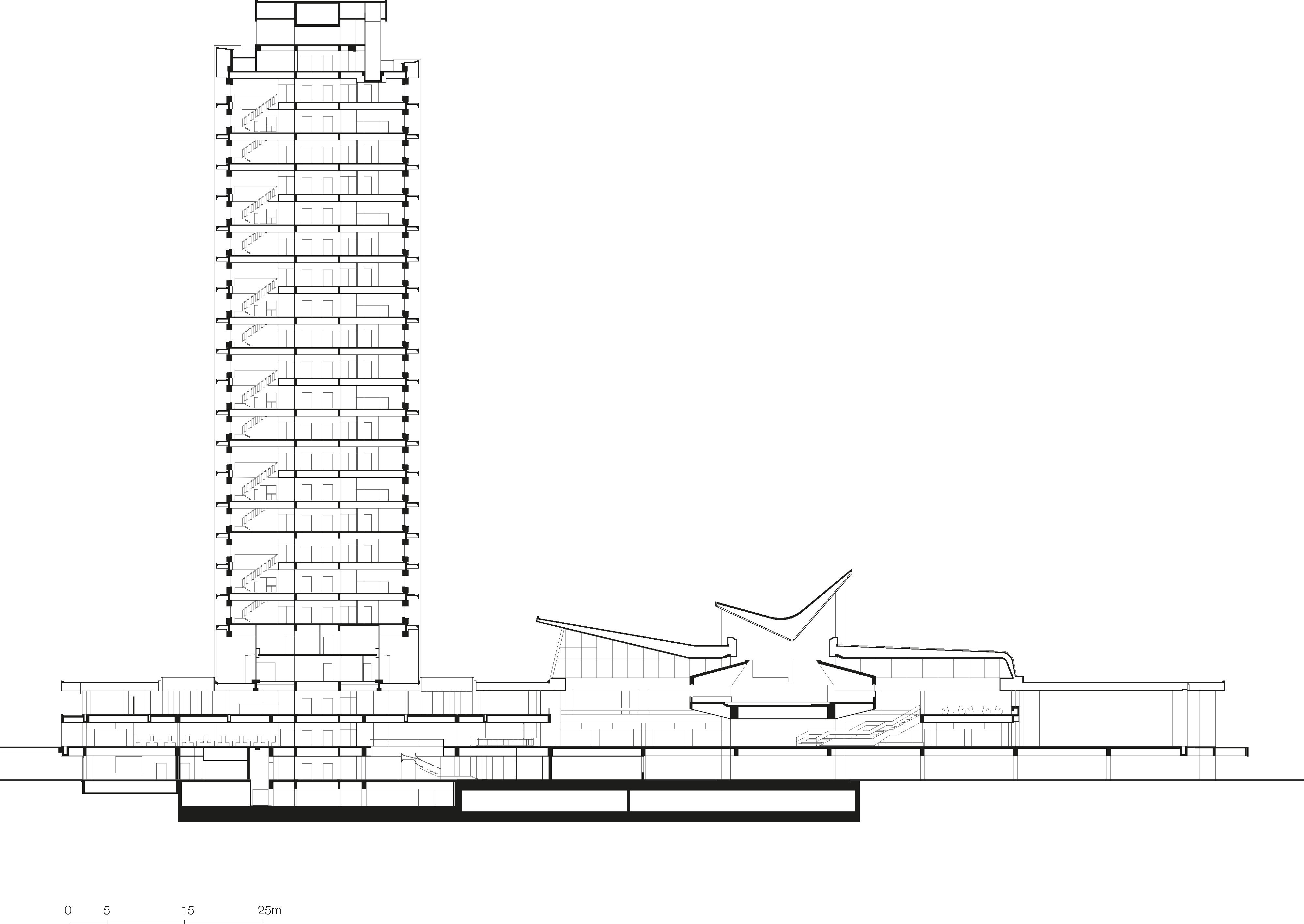 The Provinciehuis of North Brabant is located South-East of the city of ‘s-Hertogenbosch, capital of the province of Noord-Brabant (The Netherlands). It is surrounded by the watery landscape of the Zuiderplas and the busy highway E25.
The renovation of this building by KAAN Architecten brings back the balance of Hugh Maaskant’s 1971 original design and adapts it to contemporary concepts regarding the working environment. This concrete colossus was initially unpopular because of its expense and enormous size. Now, after forty years, the Provinciehuis has become a symbol of active public service and its eighteen-storey tower a striking landmark in the landscape of Brabant.
The strong character of Maaskant’s architecture speaks through generous spaces underscored by grand gestures and small details promoting interaction between politicians, administrators, civil servants and citizens. This interaction was gradually lost over time. The challenge of the renovation project was in correctly identifying the original spatial quality of the plan, in freeing the plinth from the security barriers and in updating the building to the contemporary needs.
The public, representative and meeting areas are currently concentrated on the 3-storey horizontal base, which is raised one floor above the ground level to house the parking area, symbolic itself of the modern industrial nature of the concrete architecture. This central hall is now permanently accessible. In the office tower the rooms are replaced by a flexible working space and are clustered in three floors each. Every cluster is provided with open and closed working space in a dynamic new work environment.

KAAN Architecten has not tried to imitate Maaskant. Rather, they have rooted their own convictions about architecture while respecting the spirit of the design that lies at the heart of the Provincial Government House. A striking result of the interaction between the old and the new in this project is the emergence of a kinship expressed through the ‘monumentalisation’ of everyday things: the use of materials for colour, the uncommon proportioning, the refinement and precision performing on a large scale, the ambiguities of the volumes, the predilection for robust and efficient spatial solutions. This complex scenario is effortlessly framing a multiplicity of personal daily routines, which are portrayed in the short movie “Today”.
Provinciehuis can be interpreted as an extremely lively structure, where every component of the bigger organization finds its distinctive space in the life of the building. We can see a fascinating contrast in between the huge proportions of the edifice and the intimate, personal dimensions of the gestures of its users. All those people who temporarily inhabit the building influence the perception of the space itself. They interact constantly with the architecture surrounding them, leaving their own personal imprint on this work environment.
“Today” is transparently revealing the appropriation of the space by its occupants, the recurrent paths employees follow during their daily routines, and the way they speak and interact with each other. The renovation of Maaskant’s landmark has consolidated its strong presence and retained a welcoming space for the community of visitors and workers that experience it over time.