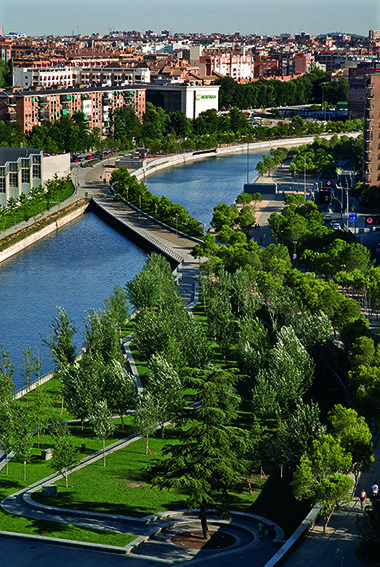 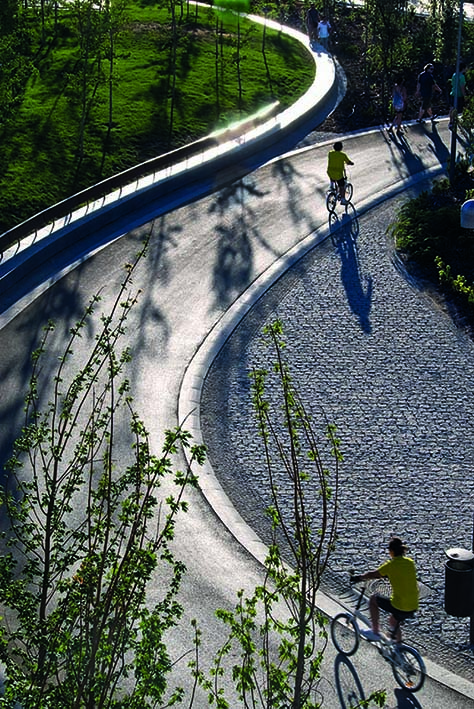 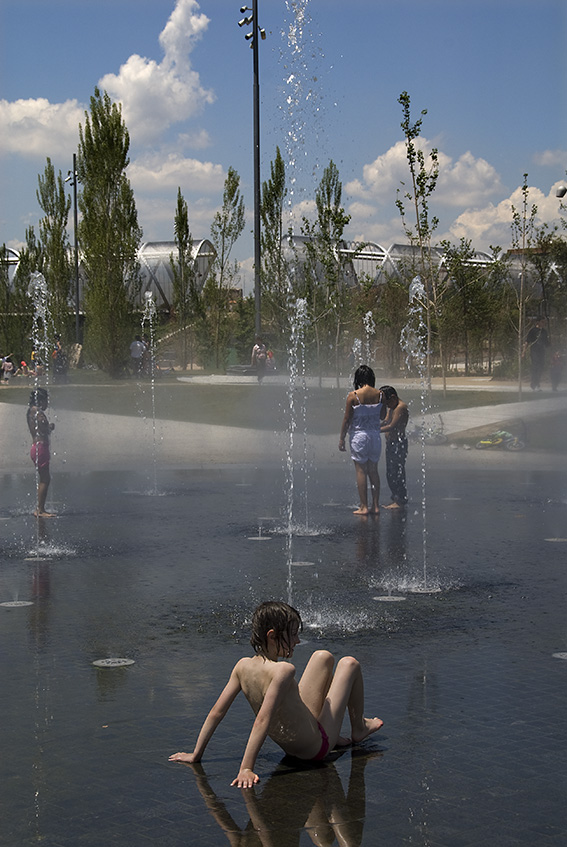 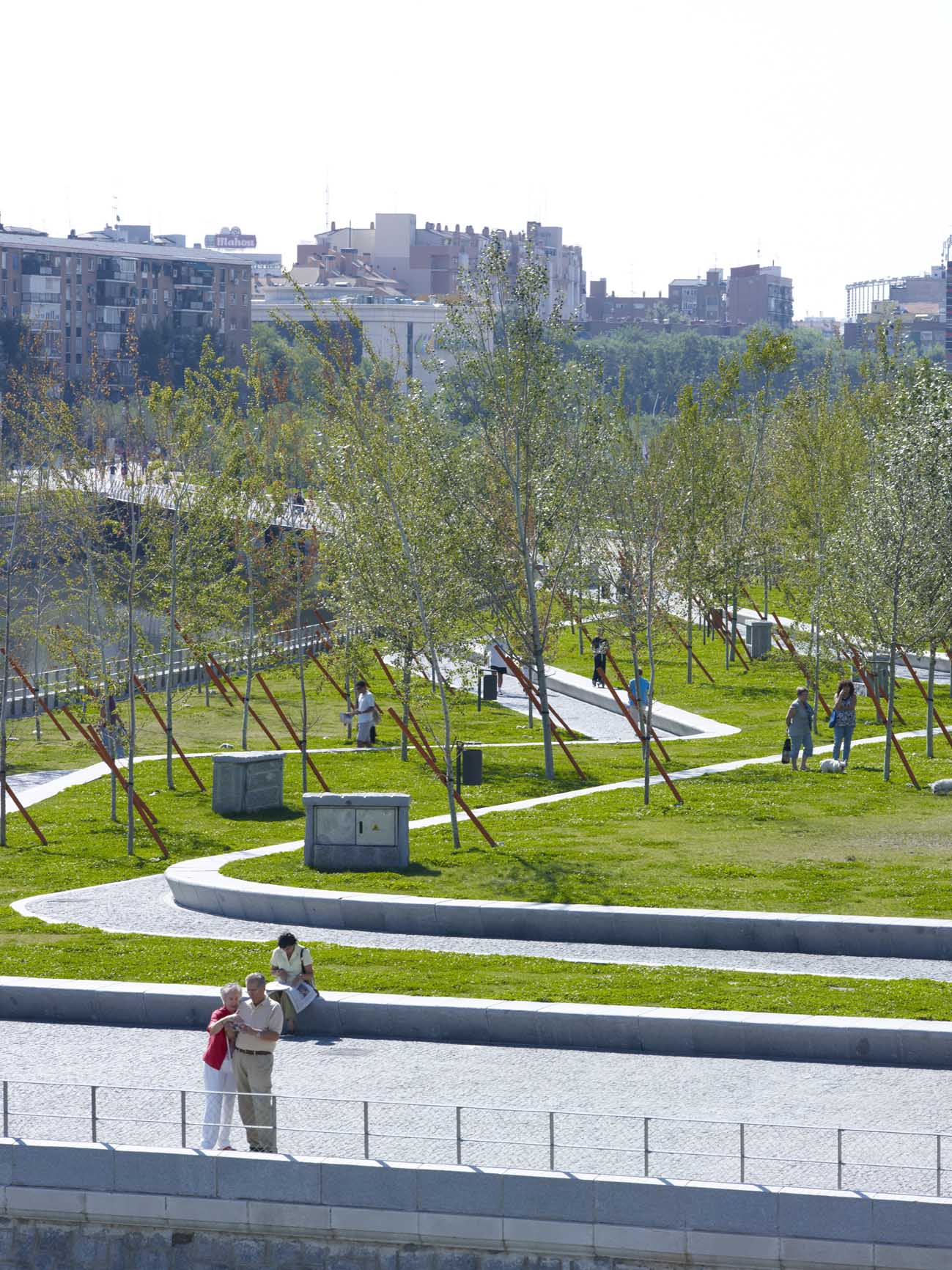 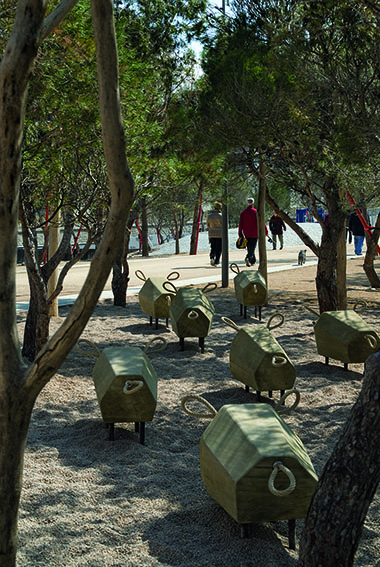 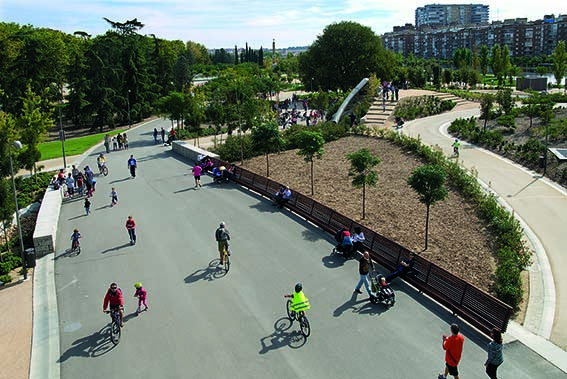 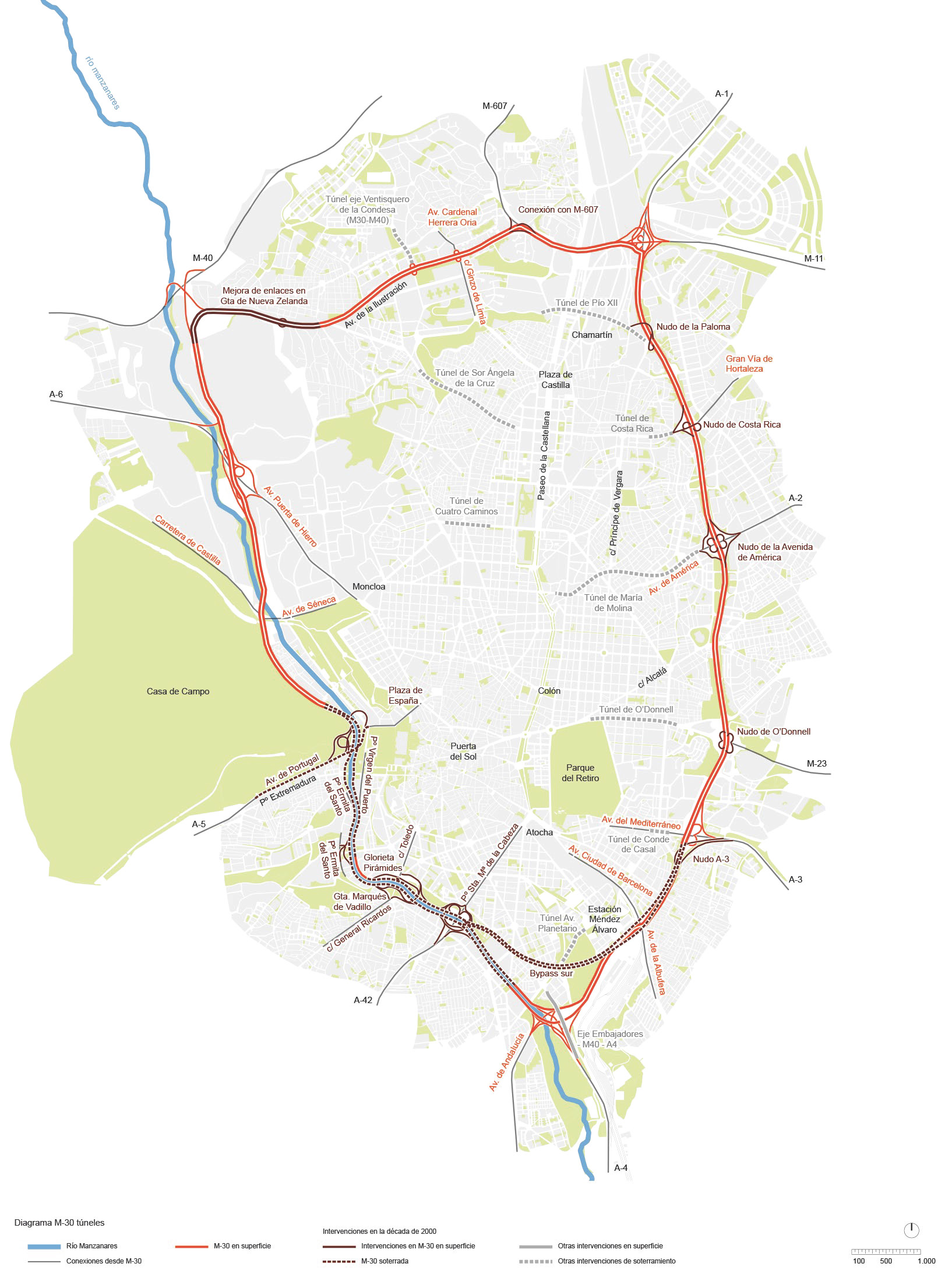 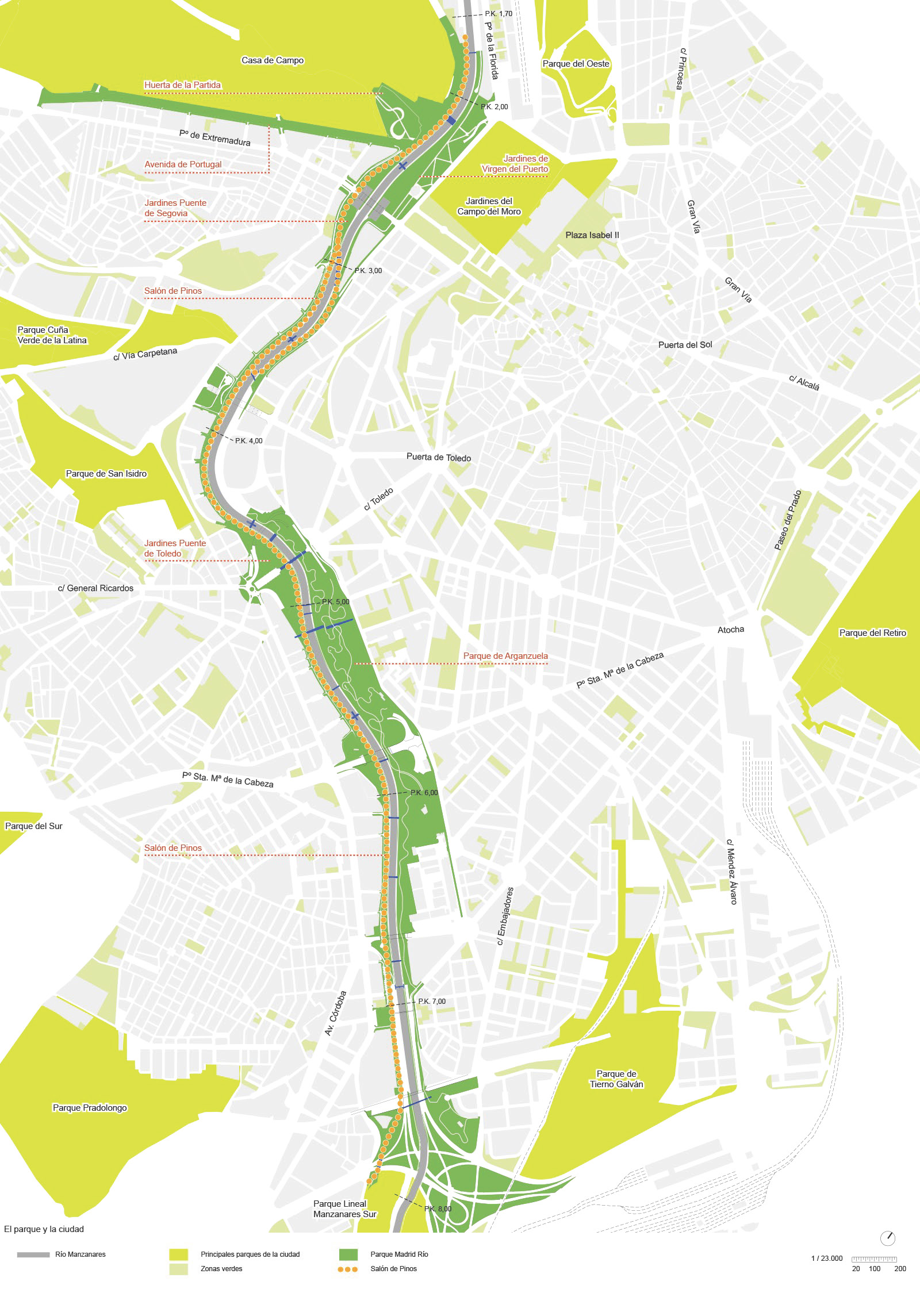 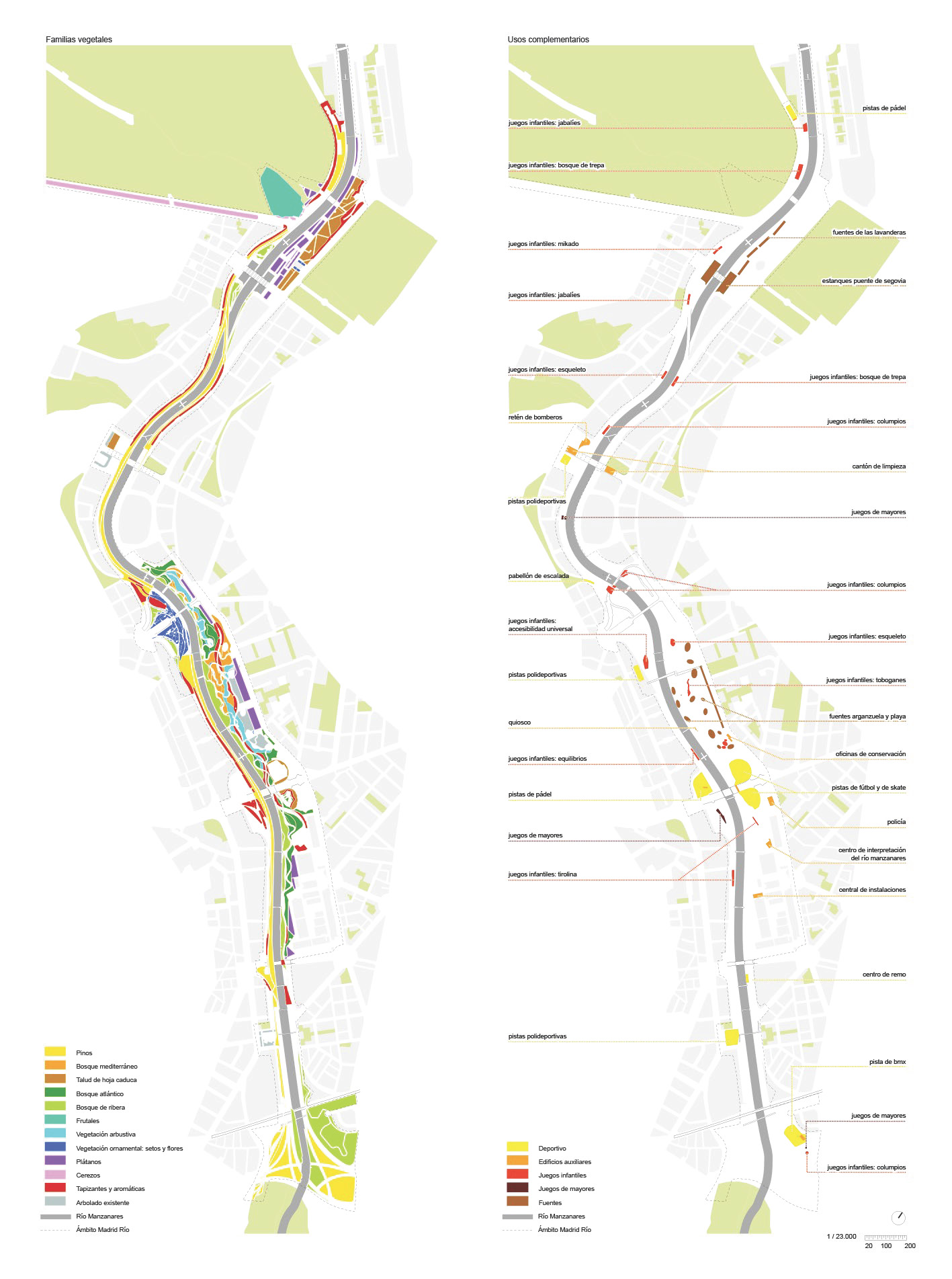 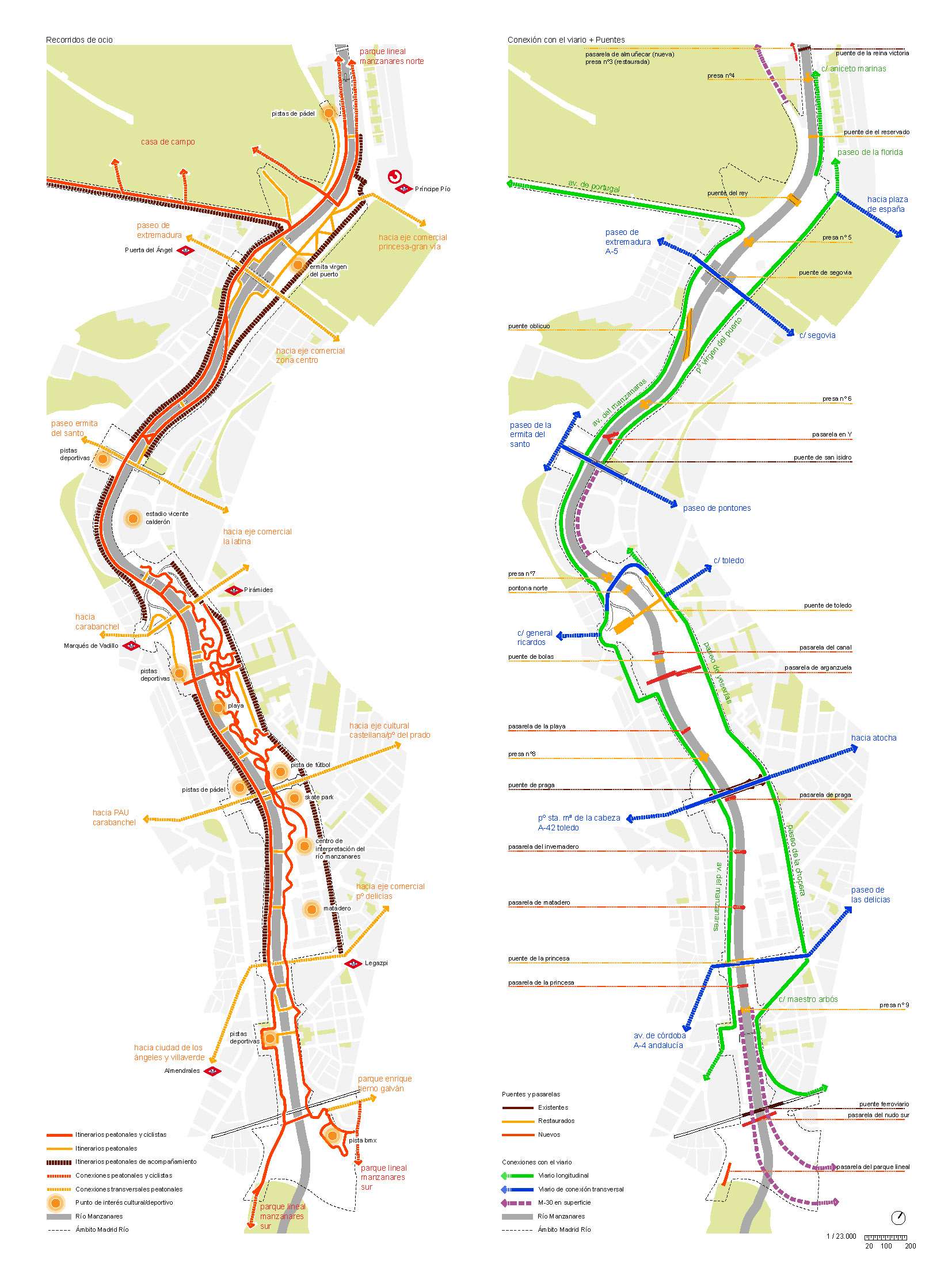 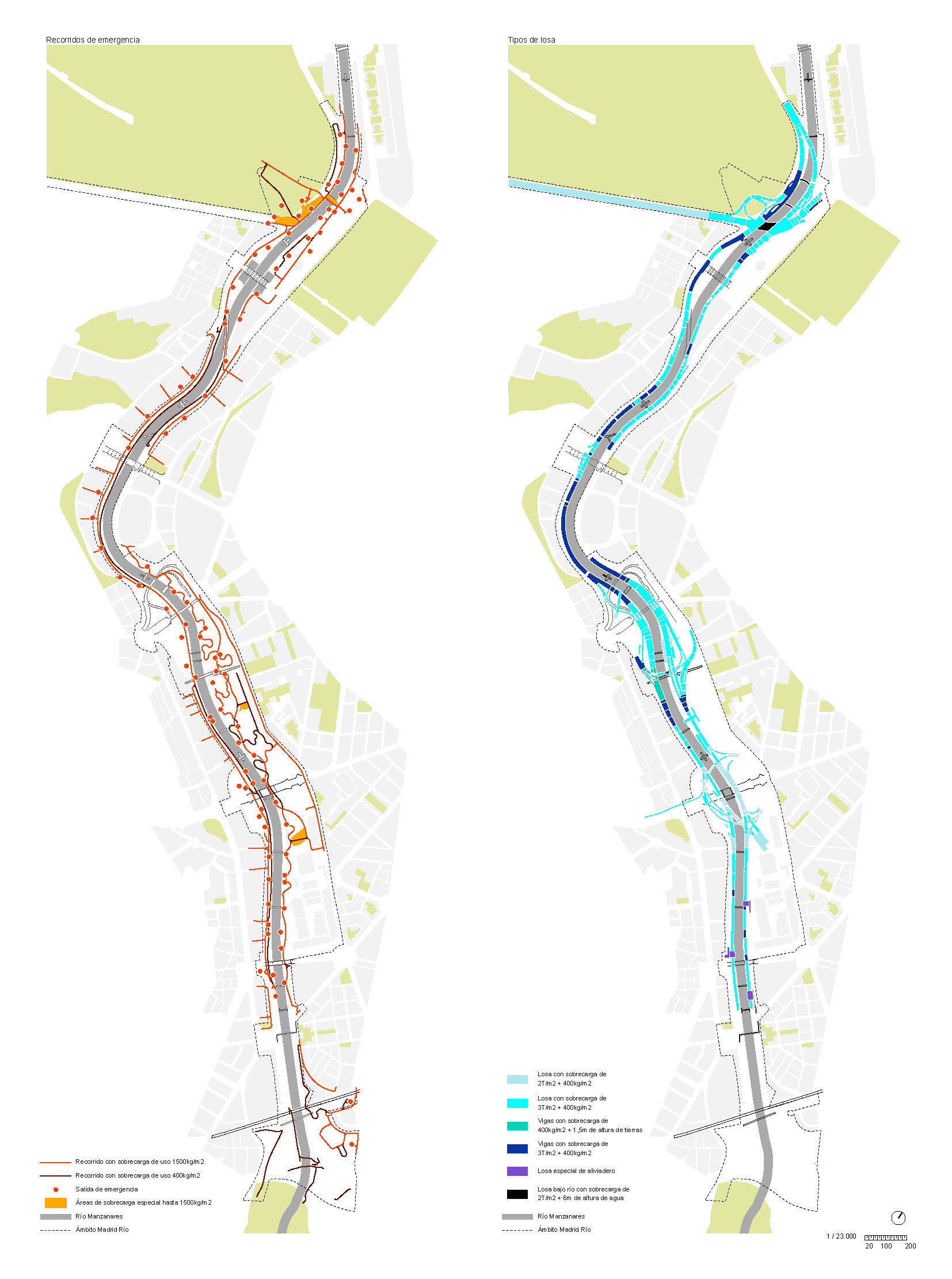 In 2003, the Madrid City Council decided to bury 10 km of the city’s first Ring Road [the M30] running along both banks of the river Manzanares. The Madrid Rio intervention had to include everything, from the deepest functional levels underground to the new continuity elements on the surface.
Our team regarded the project as a great geographical intervention, bigger in scale than the area left vacant after burying the motorway. It was essential to envision, understand, draw, and walk the river as a whole, from its source at the Sierras in the North of Madrid, to the plateaus and meadows in the South and somehow incorporate this experience and geographical reality into the project.
The design is the visual consequence and materialization of the reorganization of the river banks, which includes:
– 12 new pedestrian-bridges
– 6 ha of public sports facilities, social, communal and artistic amenities
– An urban beach
– Children’s areas and outdoor furniture.
– The restoration of the river’s hydraulic architectural heritage.
Madrid Rio as a whole is one of the biggest “urban mat-buildings” in the world. Vegetation was the main material used on top of it to create a dense and ecological environment, a living landscape on an inert underground substrate. It integrates large infrastructures and the built urban fabric with the natural environment that surrounds them. The aim of the project was to make place where the landscape, the city, the architecture and the urban infrastructures combine to create a more diverse environment and a greener and more inhabitable city.

The project as become a very successful collective space for the citizens of Madrid, and particularly for the inhabitants of the nearby neighbourhoods. All the local residents use the new public space simultaneously, each in their own way. The park has rectified a distinct shortage of freely accessible green zones and opened spaces in the south-east and south-west of the greater Madrid area, but also within the city itself where the neighborhoods are very dense and compact and where opening-up pockets of space is a difficult, controversial, costly and a very drawn-out process.
Madrid Rio acts as a social catalyst, based on the lineal condition of the river:
– It connects the rich to the poor neighborhoods, which benefited the most from the intervention, as they were the ones with worse open spaces and facilities.
– The vast length of the two urban façades towards the river, of over 12 km altogether, allows the urban fabric and the public space to intensively activate each other, encouraging interactions between the residents of the 6 neighborhoods near the river.
– The easy transversal crossing of the river has generated a new map of the previously existent economic and social relations and now neighborhoods that seemed distant apart intertwine.
The neighbors have naturally claimed Madrid Rio and additionally, it has become another city attraction that draws many visitors from other places, neighborhoods and cities. It has gained, in a sense, the value of a metropolitan condenser.