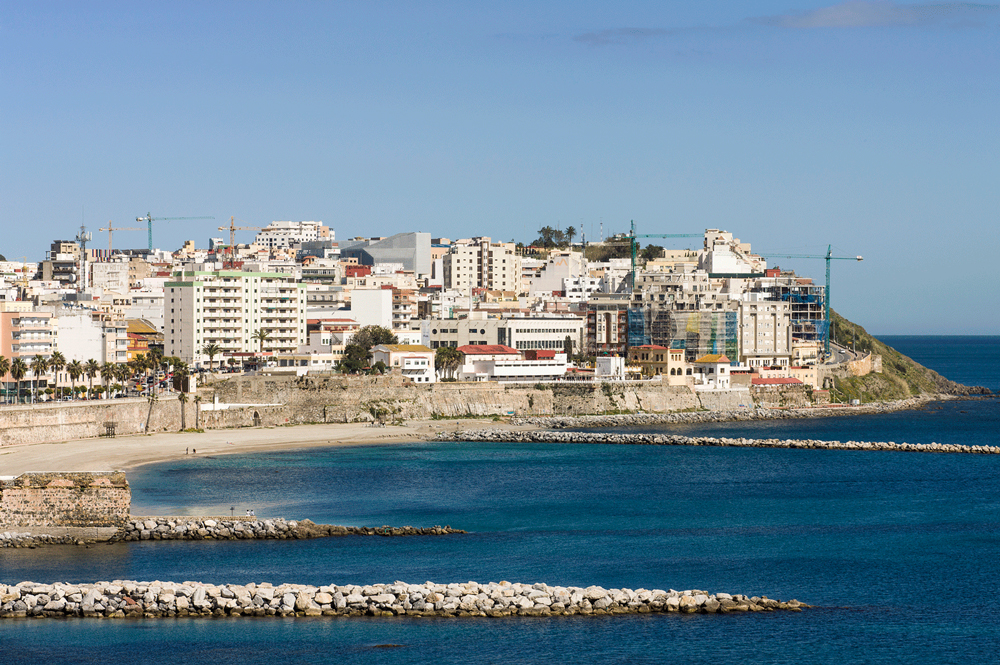 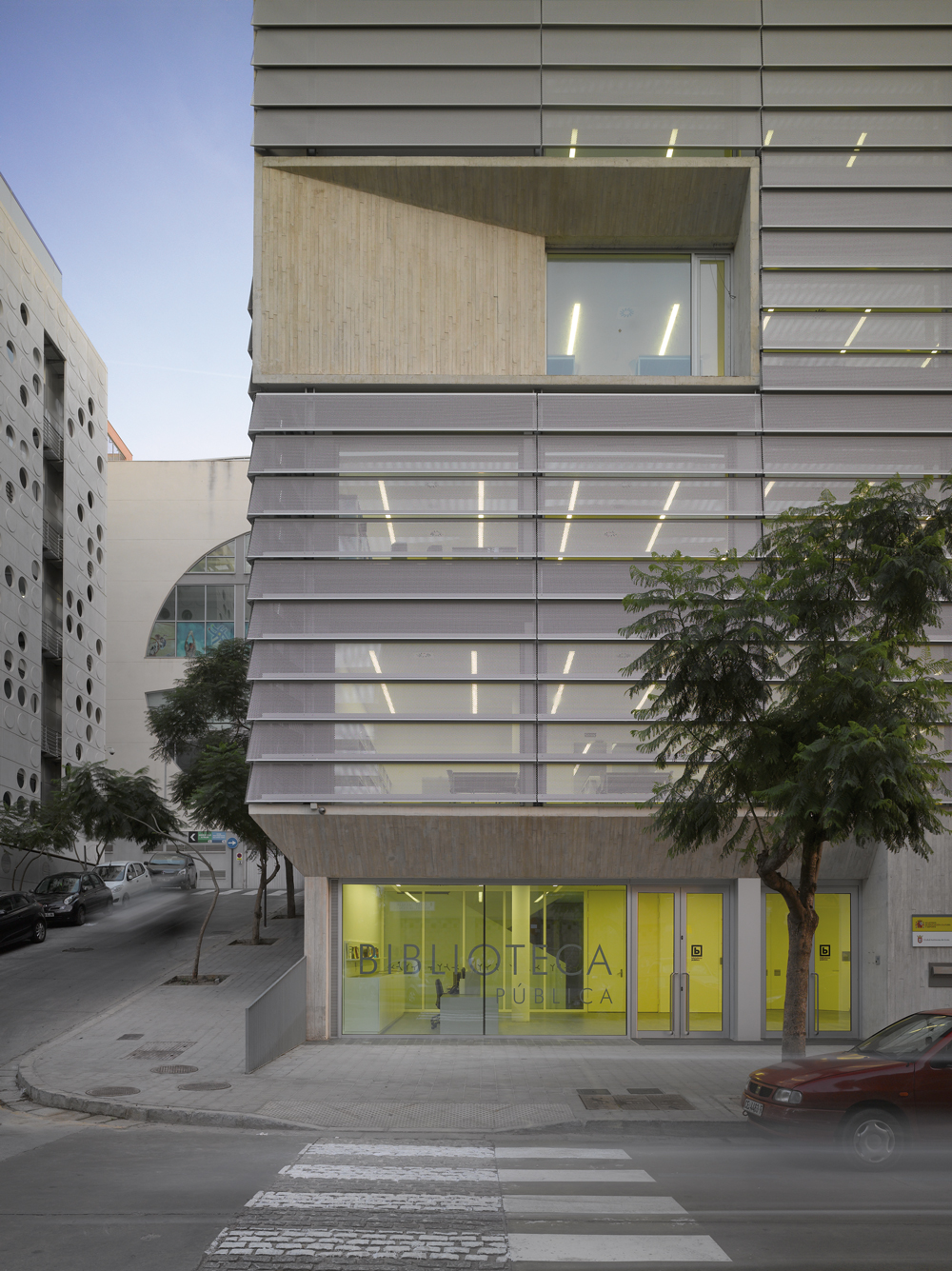 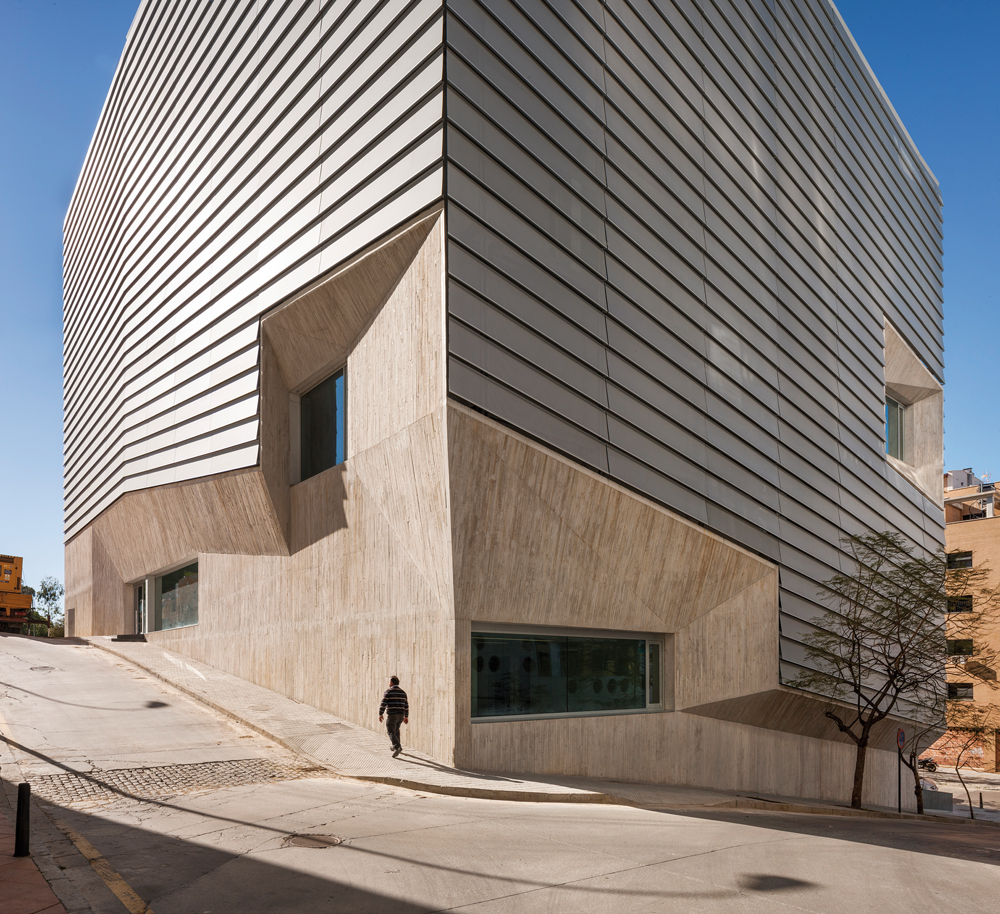 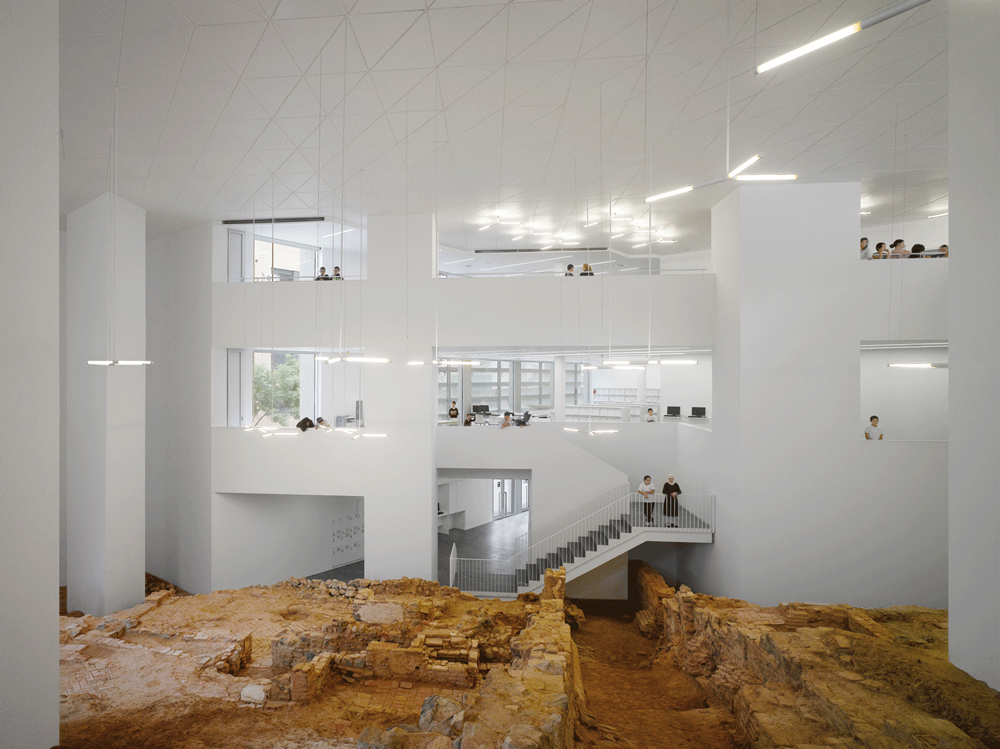 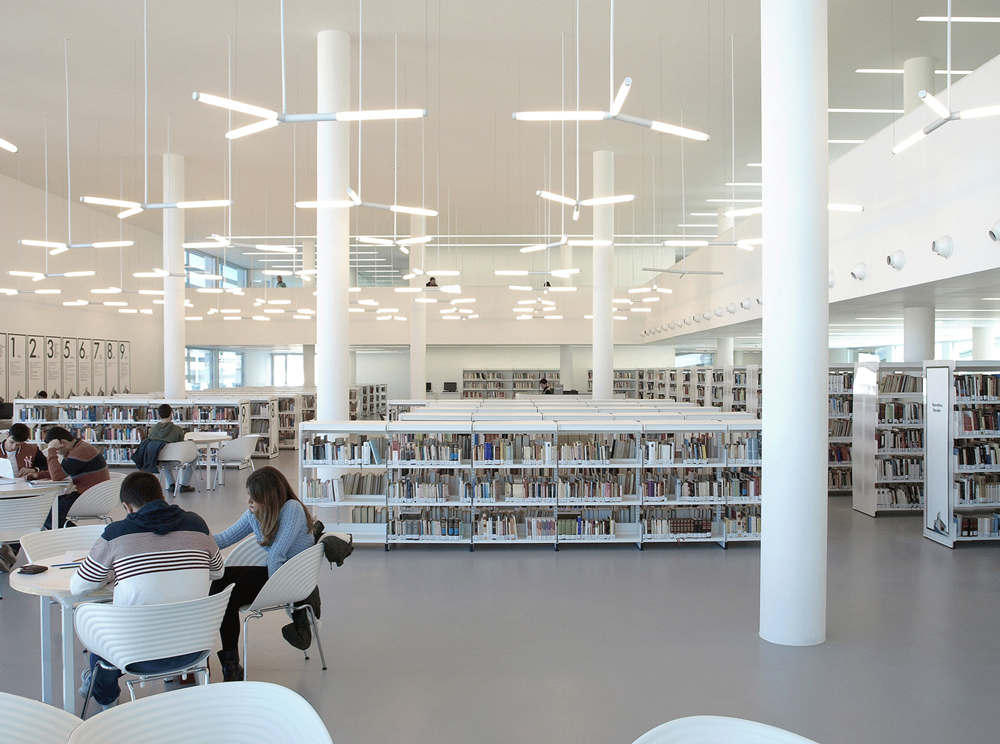 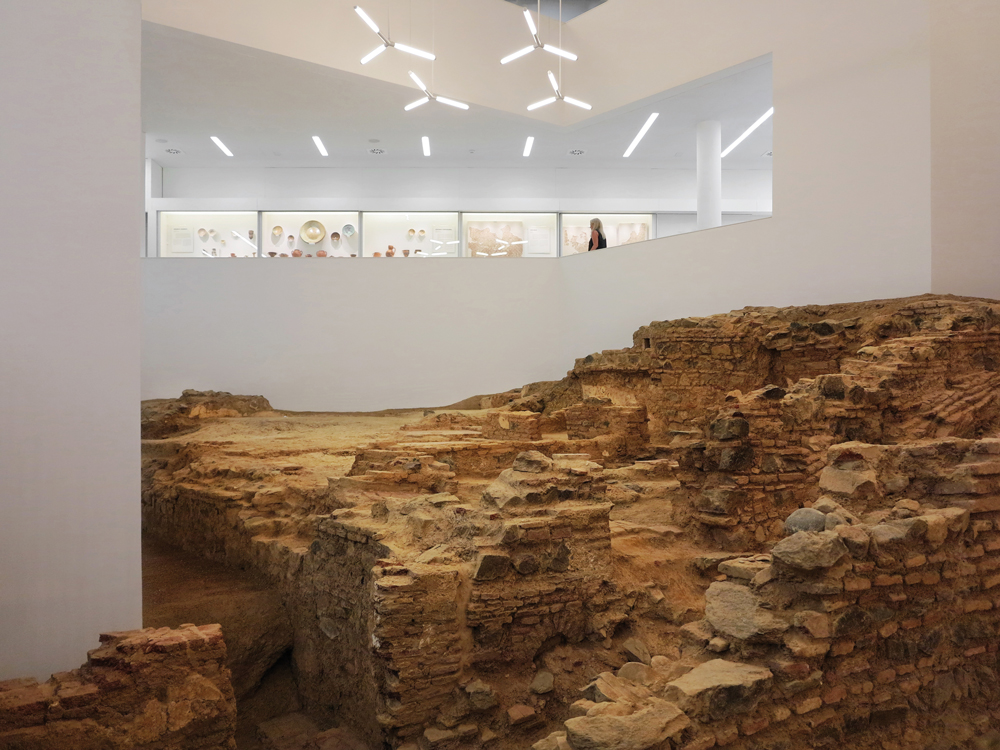 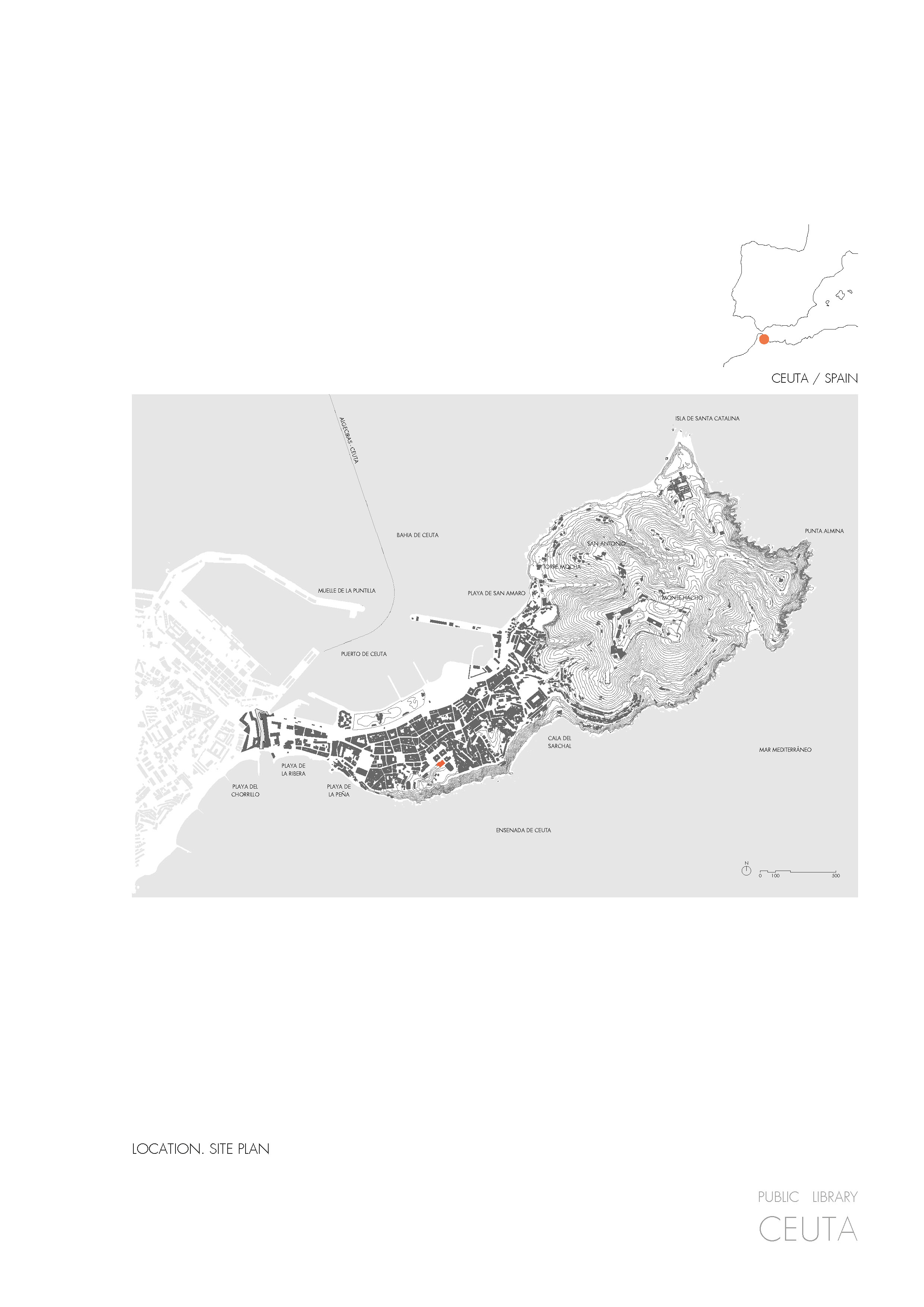 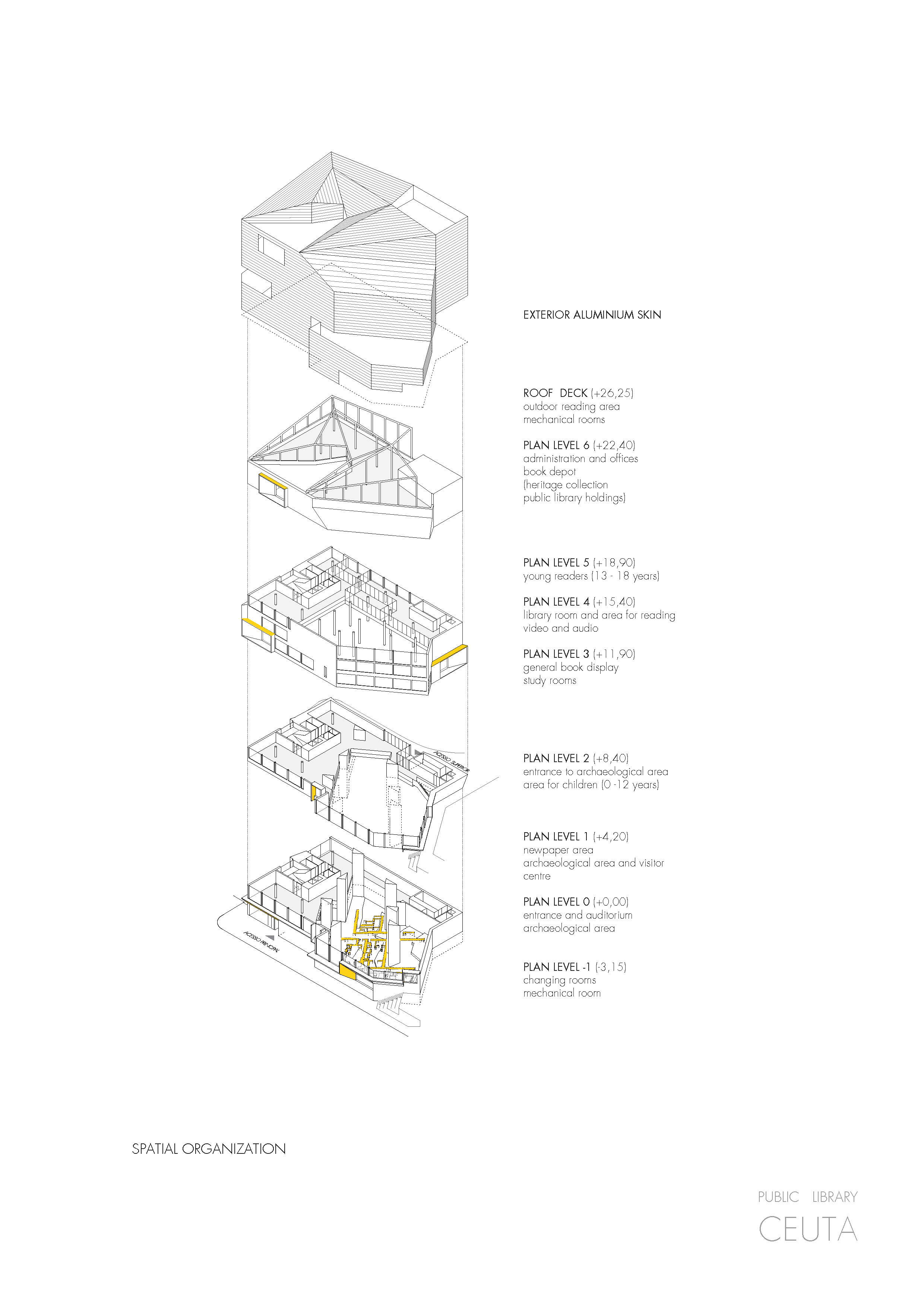 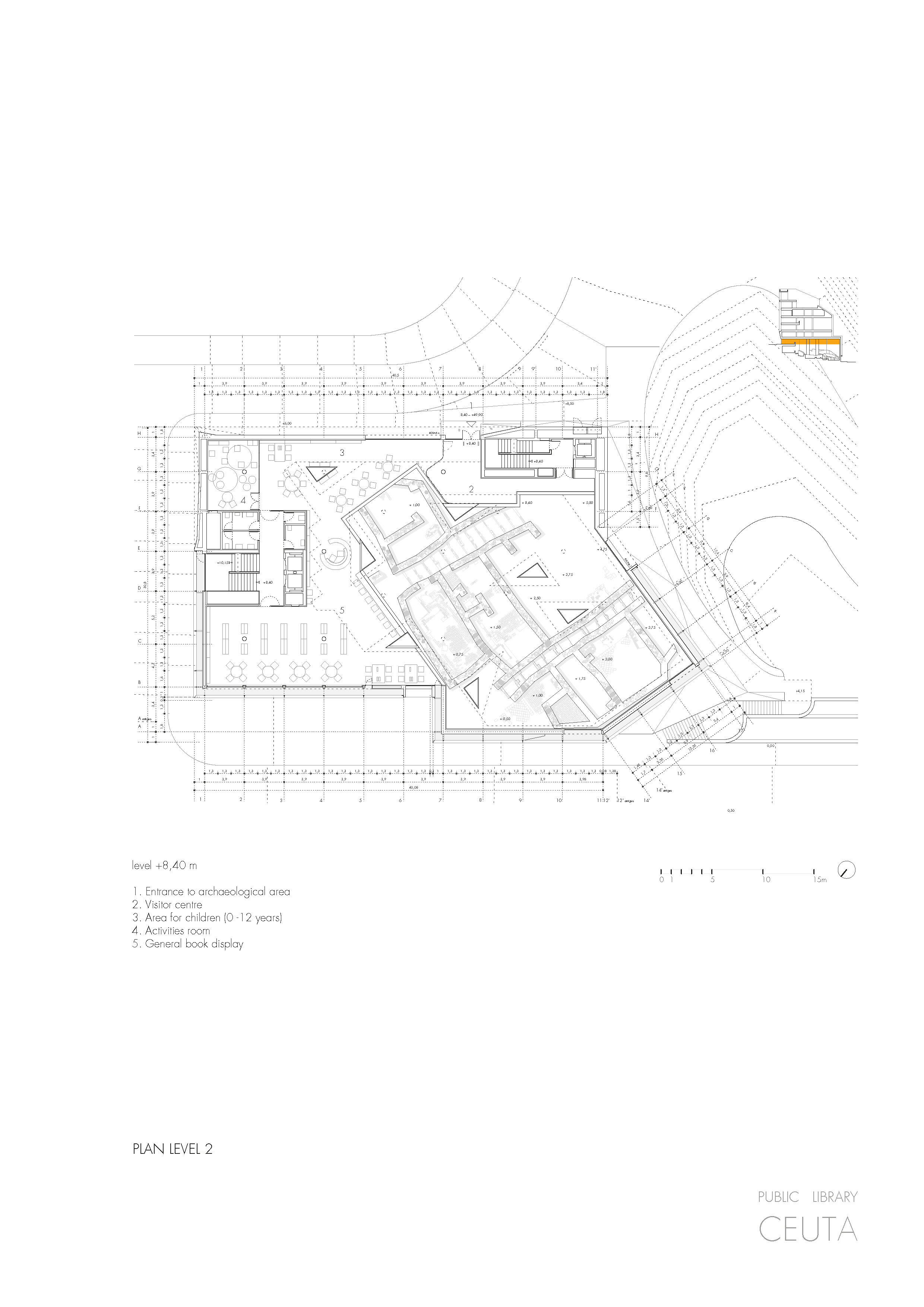 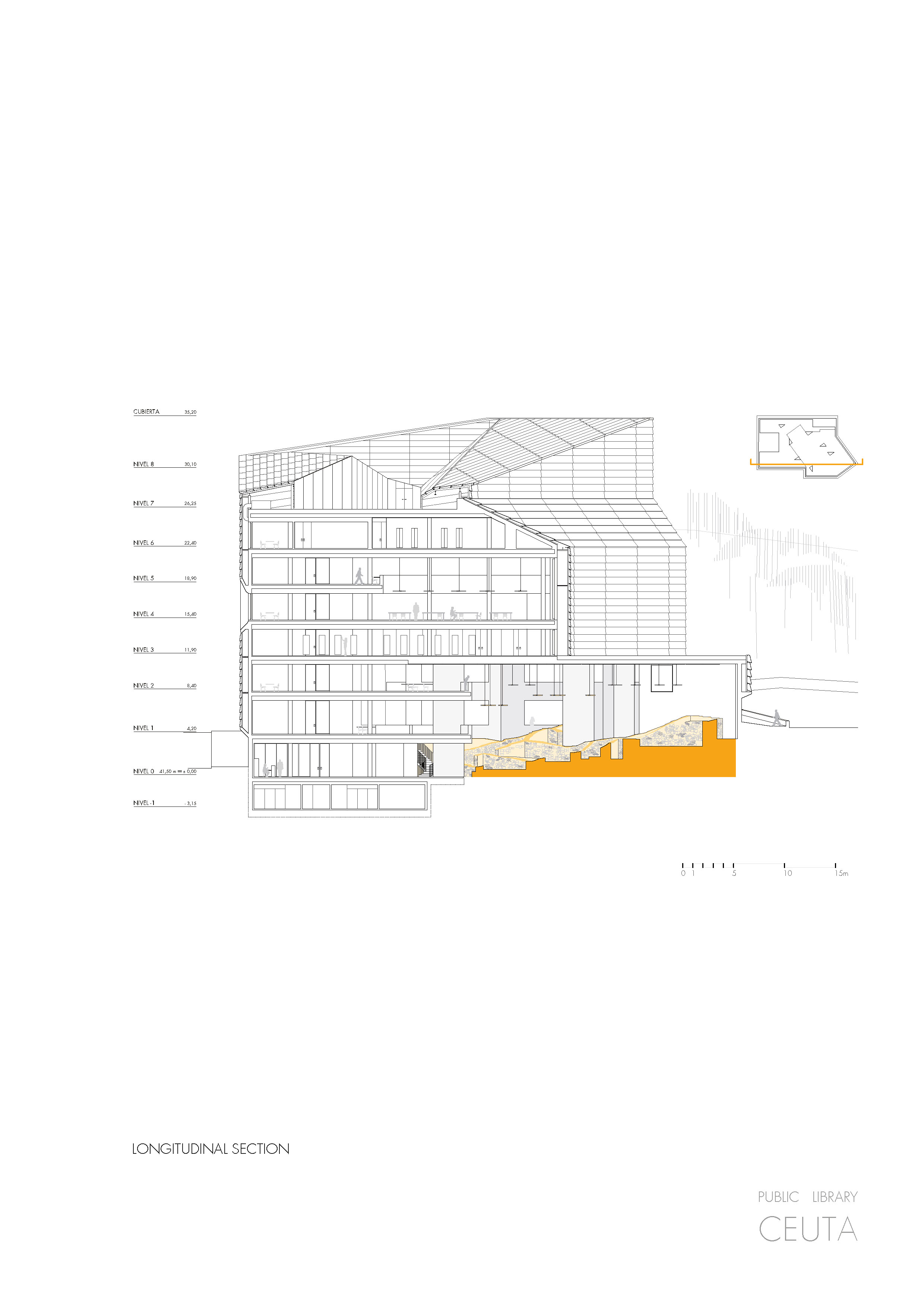 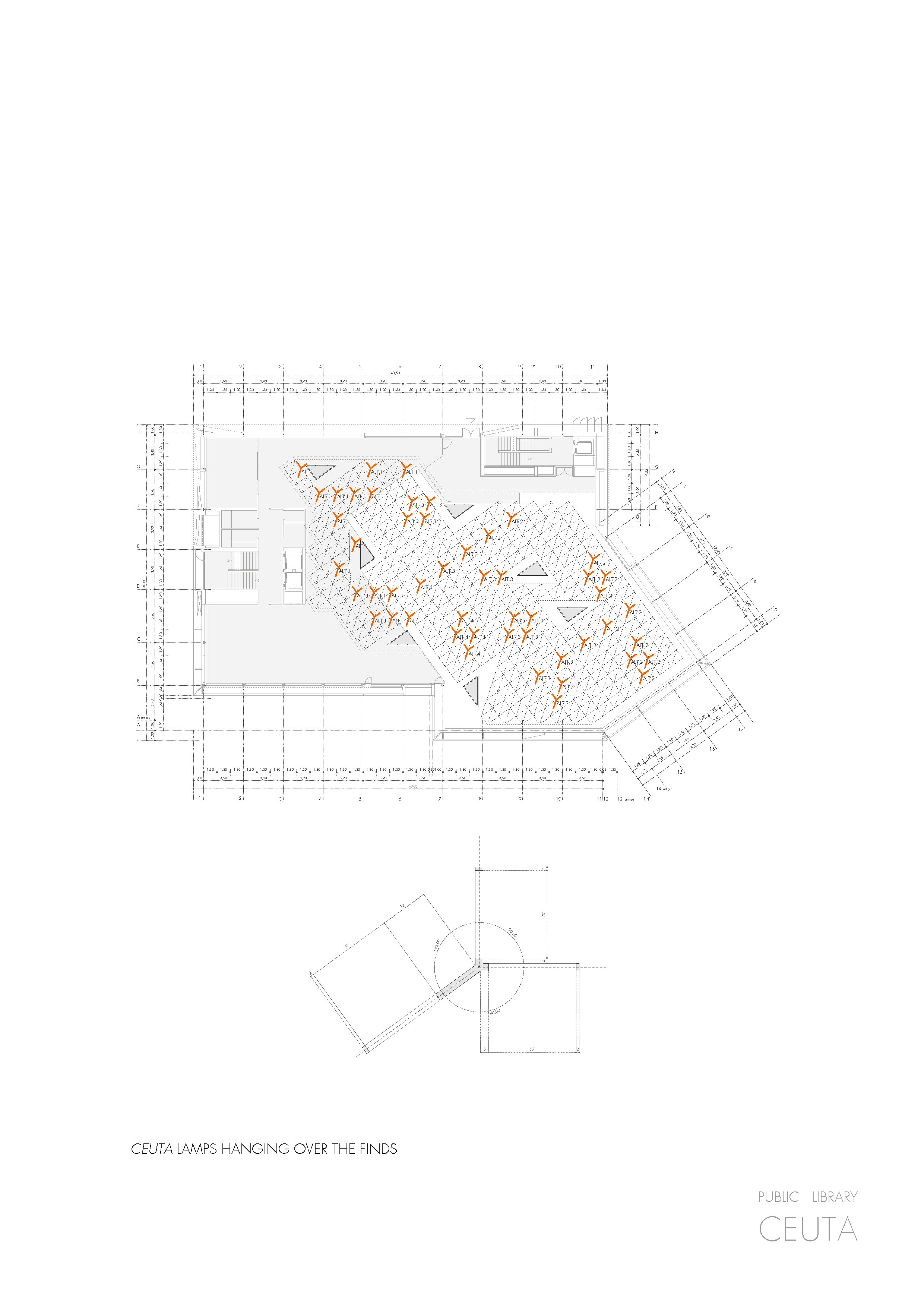 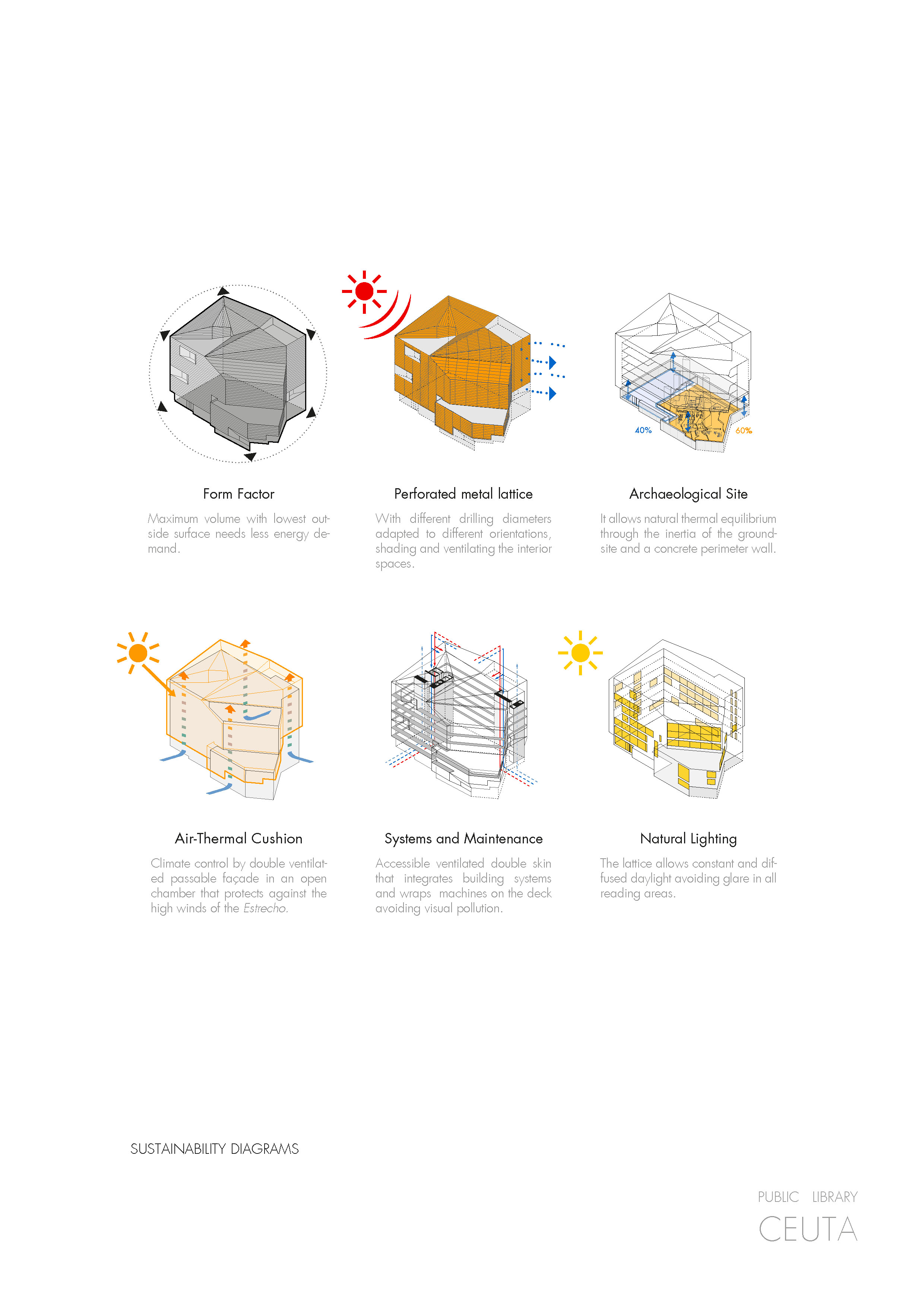 Ceuta Library is conditioned by the steep topography of an archaeological excavation that determines all interior spaces and by the compactness of Ceuta, located on the north coast of Africa. The orthogonal geometry of this ancient settlement is turned from that of the actual urban grid. This fact establishes a triangular geometry for the structure and the urban value of the Marinid city is included in the geometry of new building.
The Library is conceived as a compact volume that preserves the archaeological area as the core of the collective spaces, creating a sense of openness and transparency between reading spaces and visitors to the archaeological site. The lecture rooms are placed in several levels overlooking the void illuminated by groups of hanging triangular lamps with peaks in both geometries. Seven triangular concrete pillars support the building with a program organized vertically. A light steel structure in six levels stacks the program being the highest one the book depot, archives and offices.
The compact folded volume is wrapped up in an aluminium-perforated skin, as a veil, that reduces glare and solar gain and maximises the use of natural daylight reducing energy costs. Slight variations in the perforations, for different orientations, provide the Library with a differentiated yet uniform skin, emphasizing the faceted shape of the building. A concrete plied basement runs along the steep streets and several concrete voids are cut up in the double façade of the Library as viewpoints towards the city with open views towards Europe and Africa.

A public library is not simply a place for knowledge and the enjoyment of books; it is also a forum of citizenship. In a public library books manifest their ability to multiply in many voices as readers have their pages; where writing and reading, two solo acts, includes us in a fraternity based on the truest and most intimate that there is in each of us and that has no limits in space or in time. (Antonio Muñoz Molina, "From one library to another")
The Library in Ceuta is not only the collective space described by writer Muñoz Molina, as it also integrates a fragment of the Marinid city as the core of the Library. This meshwork of mediaeval Ceuta, crisscrossed by two sloping streets providing the structure for a city of houses and market gardens, water basins and courtyards, with remains of painting and ceramics, is included in the new reading spaces. In this collective space people share books, musical venues and also share the memory of the city and past times.
The walls that can be seen are those of an everyday city, and the objects extracted from it, exhibited on one side looking over the site, are those used by the everyday people of other time who built them and lived in them. The transparency and a visual link between the spaces of the Library and the fragments of the city of the past define now a collective space crisscrossed by people, sharing different uses and different times.